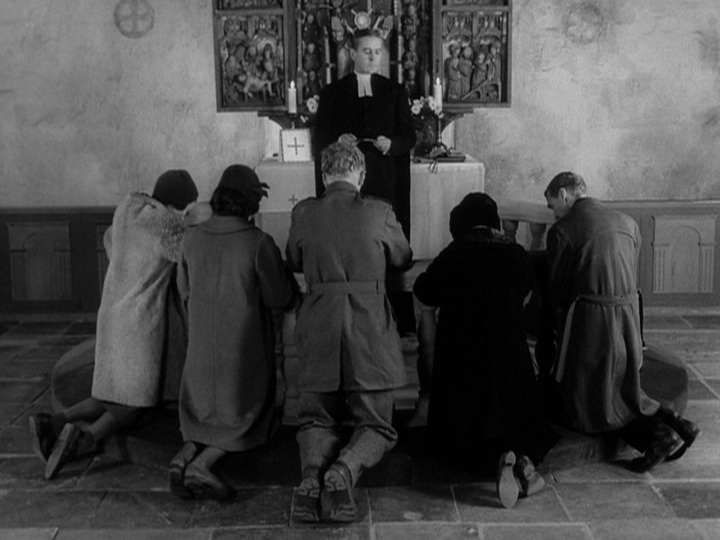 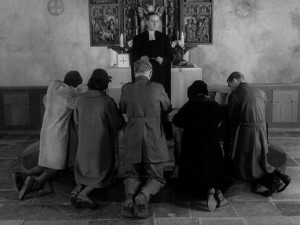 I saw an indelible image in a BYU Photography exhibit in the Harris Fine Arts Center in late 2003. The theme of the exhibition was modern idolatry and the piece was called “See that you do not take these things lightly.” I have tried in vain to find it for years since, and even considered having someone take a similar picture to feature on this post. Simply put, the photo depicted peoples’ hands partaking french fries from sacrament trays, and dipping them in ketchup, neatly filled in the paper sacrament cups. I have had many reflections on the photo in the years since I saw it.

What did the artist intend? Is it a comment on unhealthy Mormon attitudes toward food? Does it intend to juxtapose the mindless consumption of fast-food to the mindless way we might often partake of the sacrament? Is the idolatry under critique the replacement of the emblems of our Lord’s broken flesh and spilled blood with irreverent imitations, or the attitudes of congregants who might not even regard the difference? Or are the tokens themselves even important in the face of the covenant? Does it ultimately matter what we’re eating, as long as we eat with pure intent? Which brings me to this simple reflection…

If you take a step back examine the central and universal act of Christian worship [what Christians variously call the Sacrament of the Lord’s Supper, Mass, Eucharist, or Communion, and what Mormons mostly just call the sacrament] you’ll probably notice something a bit odd…

And we drink His blood.

As most of us participate in this ceremony weekly, I think we rarely let ourselves see it in such stark terms.  But there is some really fundamental truth to be found in the face value of the somewhat jarring statements I just made.

The central act of worship for a Christian is an act of ingestion, digestion, and metabolism.  We take Christ upon ourselves, by taking Him into ourselves.  Our bodies draw upon His sustenance, integrate His nutrients, and synthesize His energy into our own cells.  We make of Him, the Carbon and Hydrogen and Oxygen our bodies need to function, and little by little His substance becomes our substance, woven into the very sinews of our body.  It’s a really beautiful illustration of how our spiritual lives ought to be.  We should take Jesus, not only as our savior or our teacher, but as our model.  Grace by grace, we are to make ourselves anew in His image, so that “when He shall appear, we shall be like Him. For we shall see Him as He is” (1 John 3:2)  As He has engraven us upon the palms of His hands (Isaiah 49:16), so we are asked to engraven His image upon our countenances. (Alma 5:19) 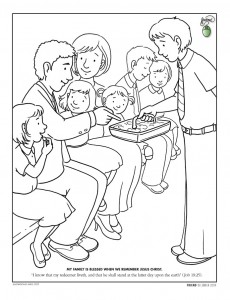 Feel free to draw in pants on the mom and make the deacon’s shirt purple.

When Jesus instituted this first uniquely Christian ordinance, He folded it into an existing Jewish rite.  As you’ll recall, immediately prior to the passion narrative, Jesus makes a triumphal entry into the city of Jerusalem at the time of “the passover”.  He rides in on a white ass and is heralded by the populace in a manner suggestive of His saving mission and His role as their Messiah.  On the night before his crucifixion, Jesus and His disciples meet in an upper room somewhere in Jerusalem to observe the feast of the passover.  This involves the eating of a ritual meal called a Seder.  In The Mediation and Atonement, early Mormon prophet John Taylor, discusses how Jesus instituted the sacrament just before the last cup of wine (the cup of redemption) in the seder feast is consumed.

“But previous to the offering up of Himself, as the great expiatory sacrifice, having fulfilled the law and made it honorable, and having introduced the Gospel, He met with His disciples… to eat the Passover. He then told them, “With desire I have desired to eat this passover with you before I suffer.” To eat what with you? The Passover. To eat what with you? The Sacrament of the Lord’s Supper… He ate both, for the two ceremonies centered in Him, He was the embodiment of both, He was the Being provided before the foundation of the earth, and prophesied of by men of God throughout all the preceding ages; and also on account of whom the   sacrifices were offered up by all the servants of the Lord, from the fall of Adam to that time; and all the various atonements heretofore offered pointed to Him, for whom they were all made and in whom they all centered. On the other hand, He it was who introduced the more perfect law, and offering Himself once for all, an infinite atonement, He, through this sacrifice, accomplished that which was designed by the Almighty before the world was, and of which the blood of bullocks, of goats and of lambs was merely the shadow.

In view of what was almost immediately to take place, He instituted the sacrament of the Lord’s Supper in commemoration of this great crowning act of redemption. When at the table, “He took bread, and gave thanks, and brake it, and gave unto them, saying, This is my body which is given for you: this do in remembrance of me;” afterwards, “He took the cup, and gave thanks, and gave it to them saying, Drink ye all of it; for this is my blood of the new testament which is shed for many for the remission of sins.”

In reality, this act of the atonement was the fulfillment of the sacrifices… of  the Passover… and having performed this, the past and the future both centered in Him… He Himself was the great expiatory offering. Were the people called upon afterwards to commemorate this event? They did it in remembrance of Him, as a great memorial among all of His disciples in all nations, throughout all time; of the sacrifice of His broken body and spilt blood; the antitype of the sacrificial lamb slain at the time of the Passover; of Him; as being the Mediator, the Messiah, the Christ, the Alpha and Omega, the Beginning and the End: the Son of the living God.

…From the time of the Passover until that time when He came to offer up Himself, these sacrifices and types and shadows had been carefully observed by Prophets and Patriarchs; according to the command given to Moses and other followers of the Lord. So also did He Himself fulfill this requirement, and kept the Passover as did others; and now we, after the great sacrifice has been offered, partake of the’ Sacrament of the Lord’s Supper in remembrance thereof. Thus this act was the great connecting   link between the past and the future; thus He fulfilled the law, met the demands of justice, and obeyed the requirements of His Heavenly Father.” (The Mediation and Atonement, John Taylor Ch.13) 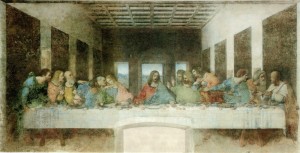 DaVinci’s famous depiction of the Lord’s supper isn’t only absurd because everyone is on the same side of the table. It also looks nothing like a seder feast would have appeared in the first century. References to ‘dipping the sop’ and the disciple whom Jesus loved being ‘at his breast’ seem odd until you learn that Jesus and his apostles most likely reclined on Roman couches called lecti (the plural of lectus), arranged in a circle around a central table on which items for the feast were arranged, as depicted below by the french master, Tissot. Stephen E. Robinson once irreverently referred to the seder contents in the center table as “chips and dips”, which is somewhat comical, but highlights the fact that unleavened bread is dipped in maror (or bitter herbs) during the paschal meal. Participation in a traditional seder feast is a remarkably meaningful exercise for any Mormon to undertake, and it will teach you a great deal about the nature of both the Jewish passover and the Christian Eucharist, a Greek word meaning “a thanksgiving”. I highly recommend it to all*.

*Those who are so inclined, should also try to attend one with good wine. 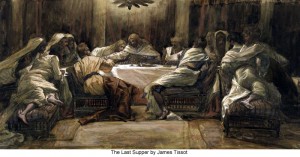 I feel a great unification with the world’s many Christians when I receive the Lord’s Supper.  We are not as different as we often believe we are, from the remainder of the body of Christ.  I believe Paul’s teachings in Ephesians about Corpus Cristus “the body of Christ” apply not only to members of the same sect, but to the wider Christian community.  In other words, the Mormon can not say to the Episcopalian, “I have no need of thee.”  Nor can the Baptist say to the Catholic, “I have no need of you.” The Lord expects a greater unity among those who profess His name and call Him “Savior”; because we all are reliant on His grace.

I sincerely believe the sacrament is deeply under-appreciated within our own Mormon tradition, and I can’t understand why.

Is it because we have “higher” ordinances?  An emphasis on the temple rites?  Or does it just become the same old same for us, week after week?  The Lord’s Supper is designed to be the fundamental act in our worship of the Lord Jesus Christ.  It is the moment when we are asked to watch  and pray with Him, like the chosen disciples of old, while He redeems us from our sins.  In our too frequent distraction, at that vital moment of His intercession, the Lord might similarly ask of each of us, “Could ye not watch with me one hour?” (Matthew 26:40) 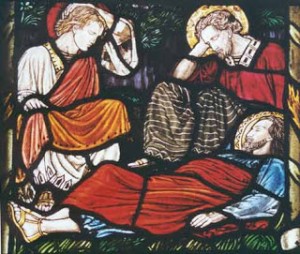 Peter, James, and John doing what you might do some weeks. Especially if you have 9:00 sacrament meeting.

I believe if we make a serious effort to meaningfully sup at His table each week, we will feel the transformative power of the Bread of Life and the Fountain of Living Waters, of which He commands, “Drink ye all of it, for this is my blood of the new testament, which is shed for many for the remission of sins.” (Matthew 26:27)

Shed for all. May we come to the Lord’s table this week and watch with awe as He redeems us from our sins. Then, in remembrance of His grace, let us partake of emblems blessed, and make again the most important promise that you can never fully keep.

To always remember Him.