Survey analysis shows Latter-day Saints are generally supportive of the Trump policy agenda, but not as much as Evangelicals 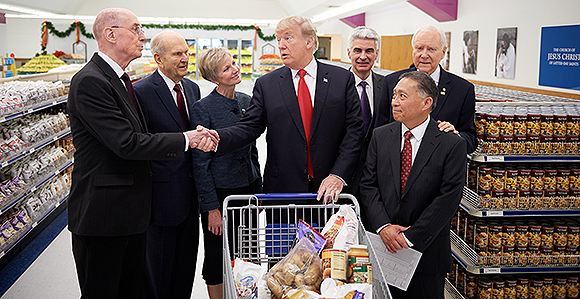 Over at the Religion in Public blog (at which I am a contributor), political scientist Dr. Paul Djupe recently shared some analysis of the relationship between religion and attitudes toward President Trump’s political policies in the United States.

Readers of Rational Faiths may be interested in some of the findings specifically about Latter-day Saints.

First, Dr. Djupe crunches the numbers in the 2018 CCES survey and shows the extent to which members of various American religious groups agree with some of the key points of the “Trump agenda”: withdrawing from the Iran deal, implementing a travel ban against immigrants from several Muslim-majority countries, banning transgender individuals from serving in the military, ending the Clean Power Plan, and banning public funding for abortion (more information on the survey questions and methodology is available at the original post here).

In this graph, a larger wedge means that the average member of the religious group is more in agreement with that specific policy:

Generally speaking, American Latter-day Saints agree with these five key points of the Trump agenda to a higher degree than members of most other American religious traditions, though not as strongly as Evangelicals. The strongest point of agreement is on banning public funding for abortion, followed by pulling out of the Iranian nuclear deal. Latter-day Saints are notably less in line with the Trump agenda than are Evangelicals when it comes to the Muslim travel ban and a little less so when it comes to banning transgender individuals from military service and ending the Clean Power Plan.

That all said, American Mormons are still generally in line with the Trump agenda more, rather than less, of the time, and more in line than Catholics, Mainline Protestants, Black Protestants, and various non-Christian groups (Jews, Muslims, Buddhists, etc.). To over-simplify things, Latter-day Saints don’t agree with the Trump agenda as much as Evangelicals, but they agree more than most other religious groups.

Later in the analysis, Dr. Djupe repeated the same analysis but this time looked at how support for these five points of President Trump’s policy agenda items differ based on the frequency of religious service attendance. Here, higher levels on the y-axis indicate a higher average level of agreement with these five policies:

That said, Dr. Djupe here shows that Latter-day Saints and Muslims stand out for having a relationship in the opposite direction: higher levels of religious service attendance are associated with slightly lower levels of support for the Trump policy agenda.

We should note, though, that for Latter-day Saints this effect is small, moving the needle roughly 0.25 points on a 5-point scale. Nonetheless, this is in line with other analyses I have done showing that the Mormon Republicans most likely to vote for third-party candidate Evan McMullin instead of Donald Trump in the 2016 election were those who were more religiously active as well as those who lived in Utah and were younger and better-educated.

On the whole, my interpretation of this survey evidence is that it tends to track well with other analysis of Latter-day Saint political behavior in the contemporary United States: despite having similar levels of strong Republican partisanship, Mormons are notch less supportive of Trump and his agenda than Evangelicals. This “notch” comes mostly from a slice of younger, college-educated Utah Mormon Republicans who have decided that Trump’s behavior and values are ultimately too much for them to stomach. Otherwise, they support their party’s president and his policies more or less as much as their partisan counterparts in other faith traditions.