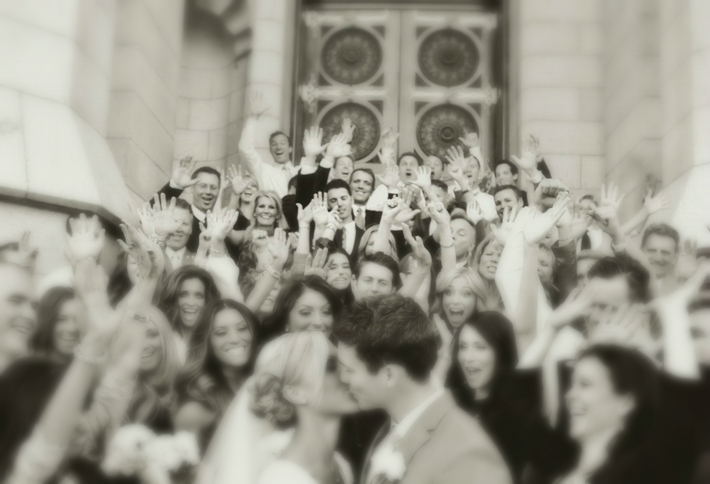 A few weeks ago my kids and I visited the temple grounds with someone I know. As we walked around this person commented on how as they have observed and attended weddings, they were a little put off by how some wedding guests acted on the temple grounds.

They said that it seemed like some guests treated the temple grounds more like a park than sacred ground. They had seen people climbing on walls, people bringing balloons, garbage left behind, and the unavoidable issues of people being loud and kids running around.

While I understood where this person was coming from and that the temple and it’s grounds are a sacred spot, it was also abundantly clear that these people were there for a wedding and acting accordingly (though with a decent effort to show reverence and respect).
They were there to celebrate and share in the crowning moment of the union of two people, most of whom had been planning this day for many months, and had dreamed of it most of their lives.

Weddings are a big deal.  Anyone who has seen Father of the Bride knows.

Sealings are also a big deal. The religious uniting of a couple making promises to each other and God is also something very special and beautiful. Sealings are what create eternal families and ties us to those we love most in the here afters.

As I listened to the complaints about how wedding guests acted in a sacred space and considered the reason it was happening, the juxtaposition of the two was immediately obvious to me.

A wedding or marriage is different than a sealing.

And while they serve the same purpose of uniting two people, they are different social events and each one demands a different set of appropriate actions and conduct.

The want and need for people to celebrate at the temple and to witness that first moment a couple is presented as  husband and wife to those who could not see that moment in person, is a real need.  People bring kids and babies so those kids can see their sibling/aunt/uncle etc. walk out of the temple and hug them and be in wedding pictures.

It  is an obvious cry to me that we’re trying too hard to mix two different spirits of a sealing ceremony and a wedding day into one.

We are trying to mesh two things that, while similar and serve a similar purpose,  have two very different tones.

While many say they wouldn’t want it any other way, to others it is clear that it’s not working.

It is possible to remove the wedding from the sealing and still have the temple sealing be the focus. In fact separating the two may make the sealing portion even more sacred and special to the couple.

The temple should be a place to perform sacred and intimate ordinances between people and God. The performance of the actual wedding ceremonies which inevitably contain JOY and celebration should happen elsewhere so that A LL whom the couple want to be there  can witness that crowning moment.

And suddenly, no one would have to fake cheer in pictures on the steps of a temple any more.
There will be no more need for balloons and coordinating who will bring the bridal bouquet to the temple. No confusion on if the bridal party should wear wedding attire to the temple for pictures, even if they can’t attend the ceremony. No more children in need of entertainment on the temple grounds just so they can see and hug their aunt/uncle or brother/sister  when they exit the building after their marriage has been performed.  No more crackers and wedding guest trash that end up all over the temple grounds.

And later on, after the bride and groom have been hugged by all of those they love and the party dies down, things are less about all of their friends and family celebrating with them and more about the couple beginning their life together.

They get to stop life and take their new spouse to the sacred House of the Lord. The focus is shifted solely to a spiritual realm as they come before Him in a special ceremony and have the family that was created days earlier sealed together for eternity.

I imagine that we would see many more newlywed couples reverently walking around the temple grounds enjoying the peace and beauty of the sealing ceremony and less of all the hoopla and noise that comes with a wedding.

Sounds pretty amazing to me.