The still small voice of FEAR 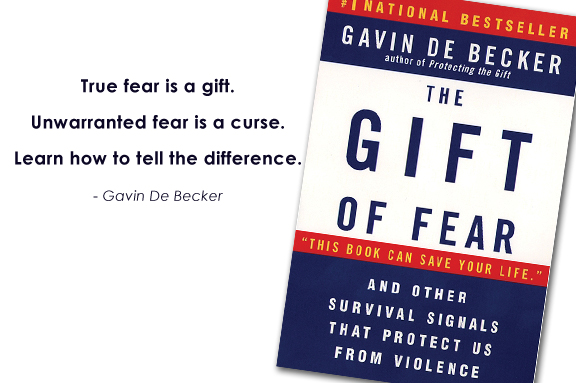 In April 2014 I was invited onto FMH podcast along with anthropologist Chelsea Strayer to discuss Gavin de Becker’s book titled The Gift of Fear. As a Police Detective within the Special Victims Unit and as a Hostage Negotiator this book helped me label certain experiences I have observed along my career. After the podcast aired, I was asked to put some of my thoughts on paper. I hope this article may help fine tune the gift that fear can be toward predicting and surviving violence and harm. The Gift of Fear introduces the reader to various stories of violence and abuse and allows one to see a pattern of inherent predictability. Violence may be found in the most common places, such as the workplace, home, school, or dating. The book describes what de Becker calls pre-incident indicators (PINS) and helps us see that when these PINS are properly identified, the probability to avoid violence increases. In scenarios where violence cannot be avoided, we can still strive to understand it and predict it and survive it.

Think of fear as an evolutionary tool we acquired to survive. Fear is the subconscious recognition of triggers and warnings that we should not be so quick to rationalize away. Fear is the still small voice of a highly evolved survival machine we call the self. When debriefing incidents of survival against violence, it becomes clear that often the survivor felt fear prior to the act of violence and subconsciously recognized red flags that were overruled by conscious thought. Unfortunately, red flags are most observable in the luxury of hindsight.

De Becker breaks down these PINS into 7 categories. Any one of these may be used against you in an attempt to manipulate your behavior or reaction. When many of these become apparent in a conversation, your red flag signals should be firing; it means you are being manipulated and your concern should shift toward safety. There are many reasons to manipulate that do not involve violence, however if violence is the goal, knowing you are being manipulated may give you the precious time needed to seek safety or get help.

• Forced Teaming. This is when a person implies something in common with his chosen victim, acting as if they have a shared predicament when that isn’t really true. Speaking in “we” terms is a mark of this, i.e. “We don’t need to talk outside… Let’s go in.”, “now we have done it”, “how are we going to handle this”, etc. In essence someone is trying to establish premature trust with you. These statements are intentional and directed in order to place you “in the same boat” when in reality there is no shared purpose or experience. When a stranger uses forced teaming language in a vulnerable situation, it should trigger your BS meter to conclude: “this is inappropriate”. When confronted with forced teaming, ask yourself WHY?

• Charm and Niceness. This is being polite and friendly to a chosen victim in order to manipulate him or her by disarming their mistrust. Think of charm as a skill and not as a feature of one’s personality. Charm is almost always a directed instrument, which, like rapport building, has motive. If you consciously tell yourself, “This person is trying to charm me,” as opposed to “This person is charming,” you’ll be able to see around it. One way to charm is with the smile, which is the most important signal of intent. It is also the typical disguise used to mask the emotions. We must learn that niceness does not equal goodness. Niceness is a decision, a strategy of social interaction; it is not a character trait. People seeking to control others almost always present the image of a nice person in the beginning.

• Too many details. If a person is lying they will add excessive details to make themselves sound more credible to their chosen victim. When people are telling the truth, they don’t feel doubted, so they don’t feel the need for additional support in the form of details. When people lie, it doesn’t sound credible to them, so they keep talking. To recognize this, think of the context in which details are offered. When approached by a stranger in a remote location, no matter how engaging he might be, you must never lose sight of the context: He is a stranger who approached you. The defense for too many details is simple: Bring the context into conscious thought. (This is common in my interviews with suspects. I may bring up a serious allegation such as child abuse and the response becomes tedious with too many details that seem to forget the fact that I just brought up a serious accusation.)

• Typecasting. An insult is used to get a chosen victim who would otherwise ignore one to engage in conversation to counteract the insult. For example: “Oh, I bet you’re too stuck-up to talk to a guy like me.” The tendency is for the chosen victim to want to prove the insult untrue. Typecasting always involves a slight insult, and usually one that is easy to refute. But since it is the response itself that the typecaster seeks, the best defense is silence. If you engage, you can win the point, but you succumbed to the manipulation that typecasting elicits. (In my interviews with suspects they may say: “You wouldn’t trust me if I told you”, thus trying to manipulate me into trusting just to prove the insult wrong)

• Loan Sharking. “Here, let me help you with that”. Giving unsolicited help to the chosen victim and anticipating they’ll feel obliged to extend some reciprocal openness in return. He wants to be allowed to help you because that would place you in his debt, and the fact that you owe a person something makes it hard to ask him to leave you alone. The defense is to bring two rarely remembered facts into consciousness: He approached me, and I didn’t ask for any help. (In the reverse of loan sharking I would remind people that the probability of encountering someone who could harm you is significantly less if you approach people for help versus waiting for people to approach you and offer it. This reduces the concern of other motives when help is offered.)

• The Unsolicited Promise. A promise to do (or not do) something when no such promise is asked for is usually a promise that will be broken. For example: an unsolicited, “I promise I’ll leave you alone after this,” usually means the chosen victim will not be left alone. Similarly, an unsolicited “I promise I won’t hurt you” usually means the person intends to hurt their chosen victim. The unsolicited promise is one of the most reliable signals because it is nearly always of questionable motive. Promises are used to convince us of an intention, but they are not guarantees. They are the shallowest instruments of speech, showing nothing more than the speaker’s desire to convince you of something. So it’s useful to ask yourself: Why does this person need to convince me? When someone says “I promise,” you should think: “You’re right, I am hesitant about trusting you, and maybe for good reason. Thank you for pointing it out.” (In suspect interviews this is very common to come across. “I Promise, I’ll tell you the truth now”, “To be honest…” etc)

• Discounting the Word “No”. Perhaps the most universally significant signal is ignoring or discounting the concept of no. Actions speak louder than words, particularly a short and undervalued word like “no”. “No” is a word that must never be negotiated, because the person who chooses not to hear it is trying to control you. Declining to hear “no” is a signal that someone is either seeking control or refusing to relinquish it. With strangers, even those with the best intentions, never, ever relent on the issue of “no,” because it sets the stage for more efforts to control. Remember that “no” is a complete sentence. Any refusal to accept your “no” is an immediate indicator that you are being manipulated to accept control or influence over you.

I hope this list helps you refine your understanding and ability to listen to yourself. Remember that we have evolved with highly tuned survival mechanisms and fear is among the greatest intuitive signals we can feel. Fear is almost always motivated by subconscious recognition of red flags. Fear is not necessarily just suspicion, and it is greater than hesitation or doubt or gut feelings or hunches or curiosity. In the comfort of safety we can debrief experiences with nagging feelings, persistent thoughts, physical sensations, wonder, and anxiety but generally speaking these are less urgent than fear. When fear is felt, act on it and reason with it later in the comfort of safety. Most likely you have already experienced some of these PINs in your associations with others. Many of us have even used some of these to gain an advantage or to simply manipulate someone for a selfish end. The motive for human manipulation could be benign such as trying to meet a potential dating partner or forming a business relationship, but recognizing manipulation and refining the gift of fear can help us recognize manipulation for nefarious reasons.
I have included a link to a series of youtube videos highlighting Pre Incident Indicators and examples of them. For more detailed content please consider reading Gavin de Beckers book The Gift of Fear.

Nik Rasheta was born in Dallas Texas and moved to Mexico at age 14. H served a Mission in Bolivia. Nick is an army veteran (counter intelligence agent). He is married and has 3 kids, currently works as a detective with the Special Victims Unit and a hostage negotiator in AZ.

All posts by Nik Rasheta