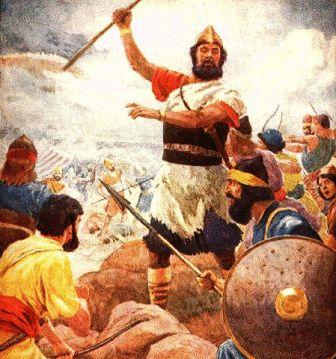 What follows is a speculation, a think piece, if you will, that explores some of the basic ideas behind the Old Testament’s theology concerning the taking of human life. It is my belief that some of these ideas may inform the Israelite practice of divinely directed military conflict; Israelite holy war, if you will. I do not wish to imply that the conflicts that the Bible relates took place just as they are written. How the Old Testament authors decided to retell those stories says much about how they viewed the conduct of war in light of the Old Testament’s ethical and moral underpinnings.

To begin, we need to go back to Eden. Specifically, we must look at the original instructions God gives to Adam and Eve in the Garden. This is the README file for the cosmos, and here are its main points:

That second point didn’t hold up, so God amends the terms to include hard work, painful childbirth and various other conditions, but the insistence on a vegetarian diet remained. But humans after Eden proved to be a carnivorous lot. They killed, ate, and sacrificed animals regularly. Cain introduced killing humans, which grew to the point where people killing each other became part of the human condition.

This is a good time to point out that even though the original instructions to Adam and Eve in the Garden did not hold in the face of human perfidy, God does not put his foot down, so to speak and immediately destroy humanity for disobedience. It is one of several instances in which God makes adjustments, allowances, even concessions to the realities of human nature. Even after things get totally out of hand and God eliminates all humanity except for Noah and his family, the tendency is to arrive at an arrangement that will work.

After the Flood, God tries again with a new set of instructions known as the “Noachide Covenant.” This is a new set of rules for a new version of humanity that grants some concessions to carnivorous, homicidal humanity. Gen. 9:3-6:

Every moving thing that lives shall be food for you; and just as I gave you the green plants, I give you everything. Only, you shall not eat flesh with its life, that is, its blood. For your own lifeblood I will surely require a reckoning: from every animal I will require it and from human beings, each one for the blood of another, I will require a reckoning for human life.

Whoever sheds the blood of a human,
by a human shall that person’s blood be shed;
for in his own image
God made humankind.

In other words, where animals were off limits to humans before, now they may be killed for human use, but the life of the animal, the blood, is returned to God. Animal and human life are placed on roughly the same level; taking animal life without returning its blood to God is just as bad as killing another human being, and the penalty for both crimes is death. The main takeaway points for the Noachide Covenant are that human blood must not be shed, and animal blood must not be ingested. This is the foundation for a viable society, according to Genesis.

The matter of not eating animals with their blood is a major concern of Leviticus (see chapter 17). In fact, the command “Don’t eat the blood!” is repeated an unprecedented five times in chapter 17, a clear indication of the seriousness of this issue. Research into this portion of Jewish law over the last couple of decades has concluded that this concern with consuming the blood led directly to the arbitrary rules for which animals were “clean” or “unclean.” Those rules (no shellfish, eat animals with cloven hooves and who chew their cud, birds but not predators or scavengers, etc.) were intended to forestall the possibility of consuming blood by reducing the taking of animal life to an acceptable minimum.

But what about the second part of the Noachide rule, that human blood must not be shed? Humans remained homicidal, so eliminating the taking of human life was clearly impossible. Israel often faced military threats best responded to in kind, which required killing on the battlefield. Was there a mechanism to mitigate the taking of human life comparable to the food laws?

The Noachide rule makes no exceptions for killing in war or any other circumstance. Moreover, recent psychological research shows what has long been suspected, namely that normal humans actually have very strong inhibitions against killing. Taking the life of a fellow human being, especially at the close, intimate range on the ancient battlefield is a deeply traumatic experience. Even breaking down the inhibitions against killing through military training or violent environments exacts a profound psychological cost. It seems clear that the ancient Israelites would have understood the deleterious effects that personal combat can inflict on a person.

This brings us to the matter of warfare in the Bible. One pattern we see repeated over and over is that of the small, select band of Israelites putting to flight a much larger force. Gideon’s tiny force of 300 routing a much larger Midianite army is the classic example. On other occasions, we see God fighting for the Israelites directly, or tipping the scales solidly in their favor to bring about a swift, decisive conclusion.

The ancient Israelites had other rules that created disincentives for participation in warfare. For example, by insisting on destroying all enemy livestock and forbidding plunder, it removed the incentive to go to war for personal gain. In fact, except for professional soldiers mentioned during the Monarchy, there is no mechanism of payment to soldiers for fighting in war, or even any mention of a standing army. War in the Bible was generally considered legitimate only in defense of the Holy Land. Wars of conquest are relatively few and not played up very much, even those of King David and other Israelite kings.

Lastly, most of the time God is the one who declares war. There are instances of Israelite kings going to war on their own, with decidedly mixed results. God in the Old Testament is unambiguously a God whose exclusive realm is life and death. Those are the only areas where he makes no concessions. God exercises control over fertility, and likewise sends plague, famine, takes human life or sanctions it through human agents. Israelite Holy War is one response to the imperative against bloodshed, and a reminder that the killing of other human beings was—and remains—the ultimate blasphemy.