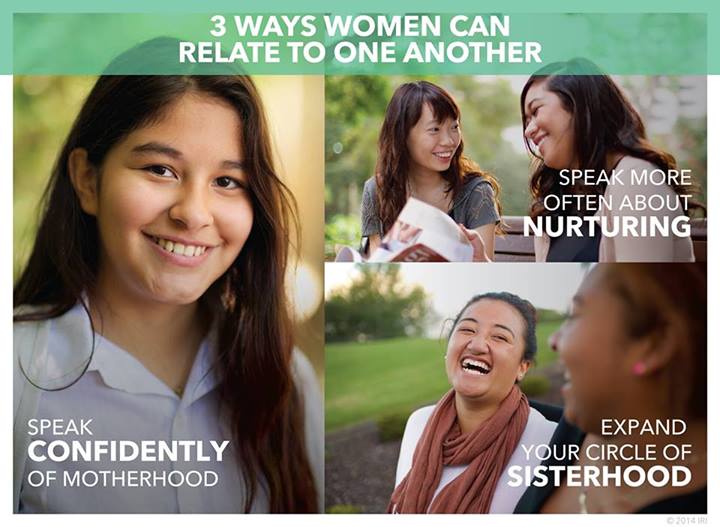 This  week some geniuses from the LDS.org meme department published  advice to women about how we  can better relate with each other.  It was in the form of a graphic featuring very young women sustaining three religious directives with their happy smiles:  ‘Speak Confidently of Motherhood, Speak More Often about Nurturing, Expand your Circle of Sisterhood’ and was in response to a recent Ensign article .

Predictably this pic,  published on the Church of Jesus Christ of Latter-day Saints Facebook page,  provoked some  outrage at  the dated efforts of a corporatized religious patriarchy to intrude upon the world of women with yet more instructions for how to manage our femininity.  It catalysed  an outpouring of indignation from women who proclaimed fiercely on the message boards,  “enough about our uteruses, our nurturing ‘natures’ and our gendered friendships!”   These comments  were predictably  juxtaposed against those who had no argument and  bore testimony to the truthfulness of said memes.

Speaking confidently of motherhood is definitely necessary. Of course, I’m a little biased, but it’s also because I need to here encouraging words about being a mother. Ignoring or belittling the topic of motherhood isn’t the answer to helping everyone, because guess what? Then who are we being insensitive to? Mothers. And in Heavenly Father’s plan He wants all of us to have the opportunity to be a mother, whether in this life or the next. Just think, if we endure to the end as best we can, we not only get to be a mother to one or two children, but we could become mothers to millions. So awe inspiring.

And then there was this:

THIS is what will help women relate to one another. Not forcing confidence where you feel none. Not putting on a false face about your difficult experiences. Not boxing ourselves in regarding who we are and what we can be with each other. Those things keep women, mothers especially, isolated from each other and trapped in their own anxieties. I wish there was a way I could talk to whoever designed this photo. You are right that the women in the church need help with this. But this is not how to help them. This is the opposite of how to help them! Ask us what we need instead. We can tell you, if you really listen.

All of this leaves us with a suite of questions:

1.  Why should something so seemingly benevolent provoke anything other than the best of feelings?
2.  What kind of socializing work do graphics such as these suggest  are the institution’s feminine ideal?  And where do those who don’t fit this aesthetic or resonate with this message belong?

Obviously questions such as these are heavy enough to occupy volumes and could keep a PhD student busy for several years (a hint for any aspiring student who would like me to supervise their thesis in New Zealand).  But I’m going to have an attempt at some overly abbreviated answers, written quickly on a frosty Saturday morning while sitting in bed waiting for the shower:

In mass communication the visual and linguistic conflation of certain characteristics with a particular population is called a stereotype.  Thus, pictures of smiling women in the same frame as words such as ‘motherhood’ and ‘nurturing’ creates a ‘solid impression’.  As the author of the graphic, the LDS church is thus responsible for  seeking to construct a widely circulated image of a certain kind of femininity .  This is problematic because once a certain solid impression has been constituted it often results in negative psycho-social effects for  those who don’t fit the image being portrayed, and this in turn can cause problems with confidence, belonging and identity.

But isn’t it well meaning and kind?  No its not, in the same way that circulating a graphic of happy Pacific Islanders with the  slogans:  Speak Confidently in English, Speak Less Often of your Culture,  Expand your circle of Nice White Friends’ is not kind and means more than innocent support  for a group of people.  It speaks at Pacific Islanders from a position of power in order to address their imagined deficits or essentialized traits and works to affirm prejudices already in public circulation.

Furthermore a graphic such as this is painful precisely because it suggests that the Church hasn’t been listening to the many many women and men  who are raising their voices to protest the traditional Mormon ideal that seems to be fixated upon certain kinds of feminine expressions.   According to this graphic  the ideal Mormon woman  is still young and she  dreams of marriage and motherhood.  But the reality for many many Mormon women couldn’t be further from the truth.  They who are ‘Other’, or those who are situated outside of this ideal  because of their choices,  or their circumstances, are thus rendered invisible.   Do these women therefore  belong?  Do I belong – as a woman who is  ‘different’ and ‘Other’ and  hasn’t vested her whole identity into the sweet, deferent mother character of Mormon mythology?  My own answer to this conundrum continues to be ‘Yes, in a way,  but not really’.

Fortunately for men they are spared the public sacralizing of their reproductive organs.  Perhaps we should  have more memes about their divine duty as producers of sperm and mowers of lawns.  Lets talk about the glory that is the moment of fertilization and the wonders of their testicular activity in furthering God’s work?  Or perhaps we should equate masculinity simply with fixing cars, clearing drains, and planting gardens and make them take endless lessons on how utterly holy all this outdoor work is?

Or it maybe its the case that the excessive valorization of  the feminine reproductive body and their  supposedly inherent nurturing qualities is a euphemism for men wanting more sex and hot dinners?   In any case I think I can speak for more women than myself when I say that  I’m reluctant to take gendered direction from a church who has shown little regard for women for far too long.

Perhaps the solution to all of this is to encourage us all, male and female to take care of our bodies, to have great sex, to raise our children together, to find meaning in our lives if our circumstances don’t allow for marriage, or our motherhood is unconventional,  or we are divorced, single or infertile.  Perhaps encouraging us  to privilege our discipleship of Jesus as we work out our moral and spiritual purpose would be more helpful?  Whatever way this ship sails, could we just stop with the mother memes?  Please?