So What Kind of Underwear Are You Wearing? 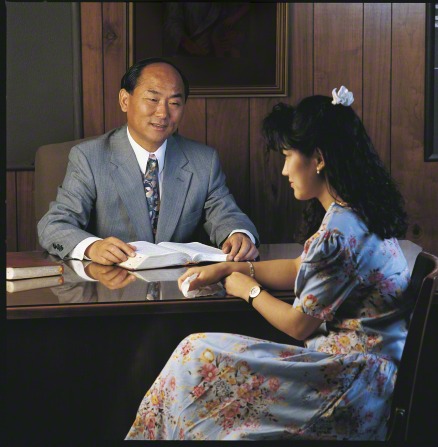 So, what kind of underwear are you wearing?

Has anyone ever asked you that before? Was it your spouse? Was it a friend? An associate? How about a complete stranger? If it was someone other than your spouse did you tell that person how inappropriate the inquiry was? I think everyone would agree that asking other people about their underwear is probably inappropriate – that kind of information is personal, private, and frankly nobody’s business but your own. Please nod your head yes.

While most people agree that asking about someone else’s underwear is inappropriate, active temple-attending members of the Church are asked specifically about their underwear every two years as part of an interview to determine worthiness to participate in the temple. Here is exactly what they are asked:

And does anyone else think that second question is kind of weird? How about if we “un-church” it a bit: Do you wear this kind of underwear? Do you wear it all day and night? Are you wearing this underwear right now?

Now, after those questions have been asked and answered, the interviewer then reads out loud this part of the Church handbook:

“Wearing the garment is the sacred privilege of those who have taken upon themselves the covenants of the temple.  The garment is a reminder of these covenants and, when properly worn, will serve as a protection against temptation and evil.
It is expected that members will wear the garment both night and day, according to covenants made in the temple.  Members should not adjust the garment or wear it contrary to instructions in order to accommodate different styles of clothing, even when such clothing may be generally accepted.  The garment should not be removed, either entirely or partially, to work in the yard or for other activities that can reasonably be done with the garment worn properly beneath the clothing.
Members who have made covenants in the temple should be guided by the Holy Spirit to answer for themselves personal questions about wearing the garment.  These sacred covenants are between the member and the Lord, and the proper wearing of the garment is an outward expression of an inner commitment to follow the Savior Jesus Christ.”

I find this part problematic as well:

“Endowed members should wear the temple garment both day and night. They should not remove it, either entirely or partially, to work in the yard or for other activities that can reasonably be done with the garment worn properly beneath the clothing. Nor should they remove it to lounge around the home in swimwear or immodest clothing. When they must remove the garment, such as for swimming, they should put it back on as soon as possible.”

In the temple we are simply instructed to wear the garment with no mention of day and night. But that passage is so specific that there is hardly room for personal choice, agency, or interpretation, which sort of contradicts the concluding sentence: “Members who have made covenants in the temple should be guided by the Holy Spirit to answer for themselves personal questions about wearing the garment.” Mixed messages or what? For the record, that concluding sentence is by far the best sentence out of the entire segment, but how many people feel like they can exercise any discretion after those incredibly detailed instructions?

So, what does the temple instruction of wearing the garment “throughout your life” even mean? Well, it could mean different things to different people. For some it means to wear them both day and night, but for others it might not. Do you plan to wear shoes throughout your life? Do you wear shoes in bed? In the summertime do you wear sandals instead of shoes? When it’s cold do you wear boots? I have crazy friends that only wear shoes when absolutely necessary, like at church – crazy hippies! Again this statement fits perfectly: “Members who have made covenants in the temple should be guided by the Holy Spirit to answer for themselves personal questions about wearing the garment.” It’s personal and it should be up to you.

The new 2013 edition of the scriptures is out and available digitally. The big difference between the old and new scriptures is the chapter headings. When you compare the new chapter headings to the old ones it’s obvious that the interpretation of the chapters was removed leaving basically just the framework of the story. This leaves the scriptures much more open to interpretation. It is the same reason why musicians often don’t reveal exactly what a song is about – they know that the song could mean something different to each of their fans and by leaving it open to interpretation they can appeal to more people.  A musician knows that the fan-song connection is the most sacred connection there is in music.

So for your next temple recommend interview, shake things up a little! You can say, “Are you asking me about my underwear?” Then you can say, ” Yes, I plan on wearing them throughout my life.” 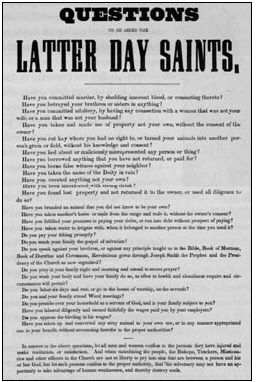 Have you committed murder by shedding innocent blood, or consenting thereto?
Have you betrayed your brethren or sisters in anything?
Have you committed adultery, by having any connection with a woman that was not your wife, or a man that was not your husband?
Have you taken and made use of property not your own, without the consent of the owner?
Have you cut hay where you had no right to, or turned your animals into another person’s grain or field, without his knowledge and consent?
Have you lied about or maliciously misrepresented any person or thing?
Have you borrowed anything that you have not returned, or paid for?
Have you borne false witness against your neighbor?
Have you taken the name of Deity in vain?
Have you coveted anything not your own?
Have you been intoxicated with strong drink?
Have you found lost property and not returned it to the owner, or used all diligence to do so?
Have you branded an animal that you did not know to be your own?
Have you taken another’s horse or mule from the range and rode it, without the owner’s consent?
Have you fulfilled your promises in paying your debts, or run into debt without prospect of paying?
Have you taken water to irrigate with, when it belonged to another person at the time you used it?
Do you pay your tithing promptly?
Do you teach your family the gospel of salvation?
Do you speak against your brethren, or against any principle taught in the Bible, Book of Mormon, book of Doctrine and Covenants, revelations given to Joseph Smith the Prophet and the Presidency of the Church as now organized?
Do you pray in your family night and morning and attend to secret prayer?
Do you wash your body and have your family do so, as often as health and cleanliness require and circumstances will permit?
Do you labor six days and rest, or go to the house of worship, on the seventh?
Do you preside over your household as a servant of God, and is your family subject to you?
Have you labored diligently and earned faithfully the wages paid you by your employers?
Do you oppress the hireling in his wages?
Have you taken up and converted any stray animal to your own use, or in any manner appropriated one to your benefit, without accounting therefore to the proper authorities?

From 1941:
This was a form that was filled out and signed:

2. Will and do you sustain the General Authorities of the Church and will you live in accordance with the accepted rules and doctrines of the Church?____ Yes____  No

6. Will you earnestly strive to do your duty in the Church, to attend your sacrament, priesthood and other meetings, and to obey the rules, laws and commandments of the Gospel? ____Yes ____No

If so, please indicate: (name of Bishop, Ward, Stake and Date)

From 1982:
This letter came down from the brethren instructing that the interviewer must ask the candidate (if married), if that person practiced “unnatural, impure or unholy practices”,which “The First Presidency has interpreted as oral sex”.  This caused such a raucous that it was quickly removed. Here is said letter: 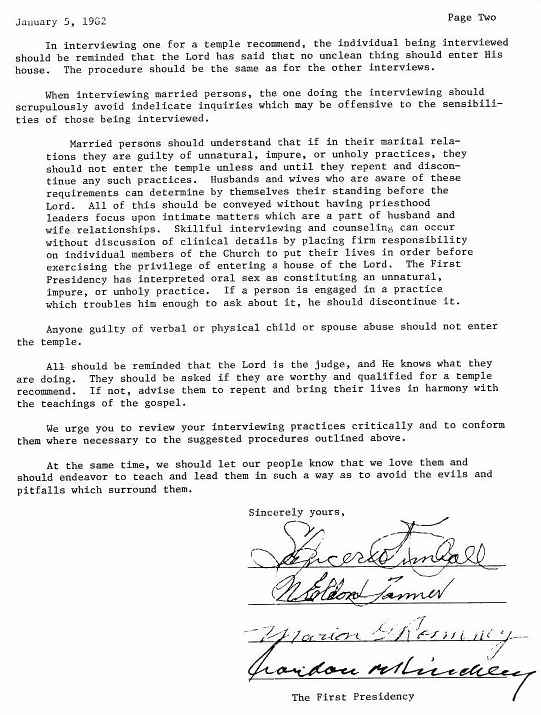