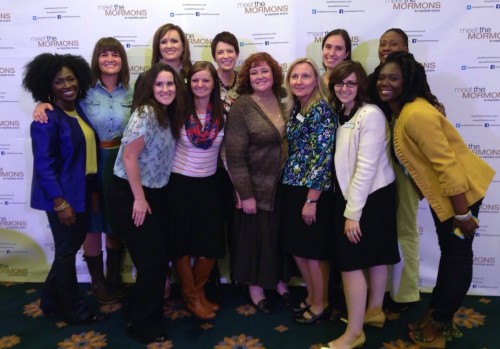 On September 27, 2014, the female staff members LDS Public Affairs hosted a pre-screening of Meet the Mormons for a cross section of female LDS bloggers including contributors to Exponent Blog, Feminist Mormon Housewives, The Sistas in Zion, Mormon Women Stand, and LDS Smile. There were several others present including a couple of well-known lifestyle bloggers. Kim Farrah, Jessica Moody, Ally Isom and several other Public Affairs employees were present as well. The bloggers were surprised to learn that Kembe and Dawn from the movie were invited to attend the screening with us.

Before the movie, each blogger stood to introduce herself and it became apparent that all the feminists were sitting on one side of the room while all the traditionally minded bloggers sat on the other. Together, we watched Meet the Mormons. At some point boxes of tissues were passed around as most eyes became moist. Afterwards, we had the opportunity to have a question and answer session with Dawn and Kembe.

When Public Affairs introduced the movie, we learned that Meet the Mormons was originally filmed to replace Testaments in Legacy Theater on Temple Square. Initial audiences were so impressed by the story and videography that they asked if it would be released nation wide in theaters. When it became apparent that it was indeed possible to do that, a theatrical release was planned.

I think of the many theater-going Americans who seek out positive and educational movie releases like March of the Penguins and Flight of the Butterflies would perceive Meet the Mormons in the same way as other documentary releases. I am certain if my Unitarian grandmother were still alive, she would have wanted to see it because she often bemoaned the poor quality of movies shown in theaters. She was the kind of person who enjoyed uplifting, feel good stories. She’s also the woman who one time expressed how happy she was that a friend of mine was investigating the church because, “The LDS Church would be good for her.” When I asked my grandmother if she thought the LDS Church would be good for her personally, I am pretty sure I heard an “Hmph” in response.

The church members who were selected for the movie were all unique in some way and at the same time, they each showed how the gospel of Jesus Christ keeps them grounded and focused on making good decisions. At church, they all appeared as normal as you or I and its only hearing their stories that you learn how unique they are. When I attend LDS ward buildings, I wonder about the people I am sharing the pews with. What stories don’t I know about?

As for the documentary, I felt that it provided refreshing perspectives on 4 important dimensions that many feel are often missing from the church: feminism, diversity, overcoming hardship and humanitarian work.

There were several feministy highlights in the documentary that are worth mentioning.

The kickboxer and her husband appear to be doing a form of Equally Shared Parenting that works for them. They are in business together and her husband encourages her in her talents. Carolina has been getting some flack for not pursuing professional kickboxing, but it appears that her decision is based on what she truly wants and care about. The professional circuit would not likely be a very family friend environment for her young kids.

While it appeared that Kembe was experiencing the hardship of getting 3 kids ready for church by herself, we learned in the Q&A that during the week days Jermaine was responsible for getting all the children ready for school while Kembe working. She was working in a part time career that worked with the needs of her young family and it was through their equal partnership that she didn’t feel it such a huge sacrifice to trade getting ready duties one day a week.

I also felt that the Candy Bomber story epitomized an important aspect of feminism and that is that patriarchy affects men too. In the rigid world of the military, his actions could have gotten him court marshaled and imprisoned for insubordination. His kind and generous actions exemplify a sort of emotion that is not often encouraged in men, but is frequently reported in Mormon communities, especially from men around the age of Gail Halverson. As I watched this segment of Meet the Mormons, I knew that I would share it with my 7 year old son and point to the Candy Bomber as the kind of man I hope he grows up to be.

It is a fact that there are more Mormons living outside the United States than in, so it was important to depict stories from international Saints. Two out of six may not have been representative of the whole but we also saw some important racial diversity within those members selected in the United States including a Samoan, an African American family and a mixed race son of a Caucasian mother. Many have said that it is important for Mormons to see the racial diversity portrayed in the film so that it can alter the way they view the worldwide church.

I was especially grateful for the depiction of respect for other cultural traditions. Bishnu provides a good example of differentiating between cultural traditions (bowing out of respect, flower necklaces, applying Bindi, etc) and religious traditions while respecting the religious practices of the dominant culture. He describes his relationship with his father and how they are able to accept one another while they continue to share the cultural practices of Nepal with each other. Carolina the kickboxer also modeled this in her relationship with her parents and well to the other members of her community through her humanitarian work.

I was personally most touched by Dawn Armstrong’s story since she was candid about her struggles as a un-wed mother living in homelessness before joining the church. It was clear to me that she experienced inter-generational transmission of poverty and missing models for parenting. I was shocked to learn that she went on to become a mother of 8 living children. As a child who was raised within a dysfunctional home, I struggle to be the kind of parent I think my children deserve so I was grateful to see a example of one who had overcome a comparable situation to have a thriving family.

After the documentary, we were able to learn more about Kembe’s grew up in Lesotho and other parts of Africa and emigrated to the United States. She and Jermaine are providing a role model in their community of a functional marriage in an area where there are high rates of single parent families in living in poverty. It is clear that Jermaine is getting a powerful example for good in his ward and community in spite of the history of racism in both the church and the South that continues to affect people living there today.

Bishnu also provides the example that education can help people get out of poverty and then also can provide the means to innovate so that others are helped out of poverty as well, which brings me to my next topic.

Bishnu is billed as “The Humanitarian” in the credits because of his role in building schools and infrastructure in his native village in Nepal. He is a local hero for what he can been able to bring to the people of his village. He likely would have returned to do the humanitarian work that he does without having joined the church, but it also shows Mormons that one can be a member of the church and not limit their humanitarian efforts to tithing and fast offerings.

Carolina, the kickboxer, was also shown performing acts of humanitarian service for children and families in Costa Rica. Her and her husband’s success as business owners enabled them to encourage members of their gym to donate food and time to provide community meals.

While this next example may not be a traditionally recognized example of humanitarian work, I feel it is worth mentioning that both Jermaine and Kembe are employed in service professions: teaching and academic counseling. Many members of the church are prominent because they excel at high paying professions (doctor, lawyer, dentist, businessman) who are then able to use their wealth to help others, but there is another professional track that I wish I saw more Mormons choosing and that is of human service professionals who use their careers to work in jobs that help address social problems. I was glad to see that being personified in their family.

Afterward, I enjoyed talking to the women from Public Affairs. I was able to talk with Ally Isom, Kim Farrah and Jessica Moody. I enjoyed my conversations with them and really appreciated how much they seem to get feminism at its core even though they many choose different terms to express their ideas. I can imagine enjoying being in the same ward with these ladies. At some point, I hope the church can learn more about these women and their stories; maybe on the Mormon Women Project or a BYU TV special. 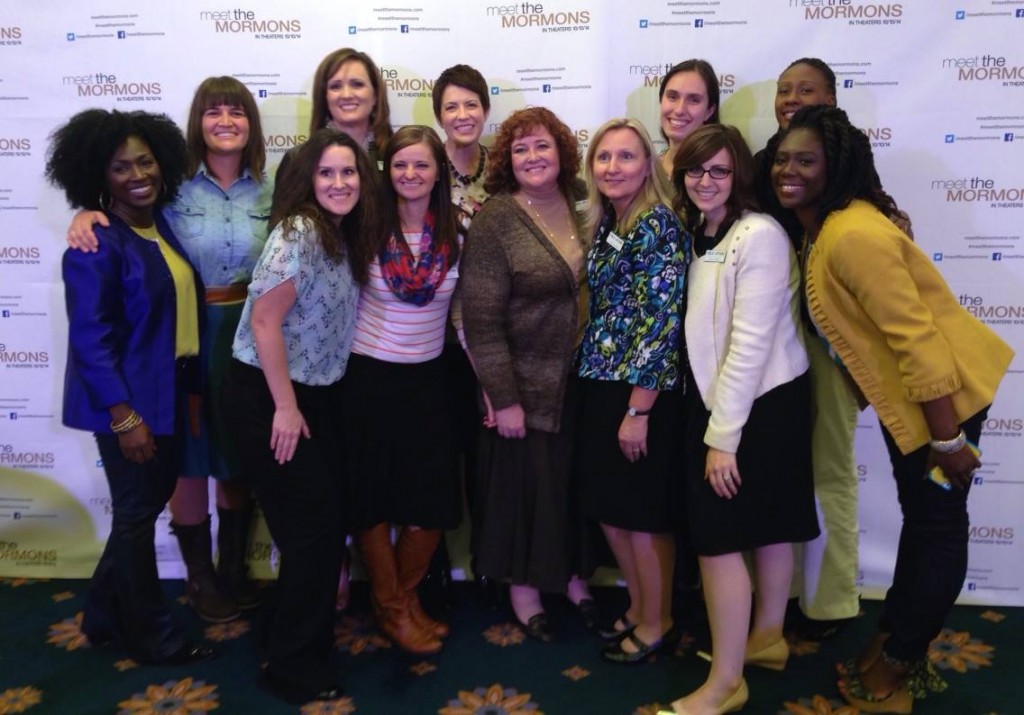 Because I had been deeply touched by Dawn Armstrong’s story, I was pleased to talk to her after the viewing as well. She agreed with me that we rarely hear stories such as hers in the church. I asked her if she would please write a book about how she overcame the challenges of her upbringing to be the seemingly calm and loving parent that she is today. I was very excited to hear that yes, she is planning a memoir of her experiences.

Since I was so engrossed in conversations with Public Affairs, the women from the documentary and the Sistas in Zion, I did not have the opportunity to talk to any of the sisters from Mormon Women Stand or the other blogs and I wish I had been able to. The women from Public Affairs stated that they are hoping that this gathering was the first of others where bloggers across the spectrum could collaborate with the church on various topics. It turns out that feminist bloggers and very conservative bloggers can stand to be in the same room with each other after all.

Lucky for me, I was able to met up later with several who had attended the Blogger event at the end of Women’s Session and we all went out to dinner together: The Sistas in Zion, Dawn and Kembe, Sara Vranes (who happens to Zandra’s cousin by marriage) and a few others. We stayed up late talking and left as friends.

It was a seriously fantastic weekend filled with sisterhood and the Spirit. I returned home looking forward to sharing the movie with my family and children.

Jenne Erigero Alderks is a convert from the Unitarian Universalist tradition. She is a wife and mother of three, a birth and postpartum doula, ward missionary and Primary teacher.