Serving the Least of These 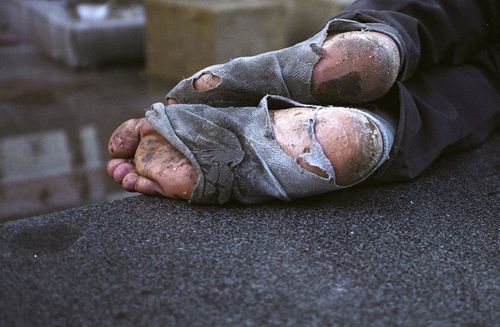 I first became introduced to Russell Farris at a network marketing group that he and I both attended.  We became friends over time and I grew to understand his love for serving others.  He is very active in his Baptist Church, and while we would often disagree on doctrinal issues, we both agreed that the pure love of Christ came from serving others. For the past four years, Russell and other members of his small community church, Tabernacle Baptist, have been involved with feeding the homeless in Fort Worth.  They go out 1 to 2 times each month on Saturday morning and on several occasions invited me to come join him.

This past weekend I joined him for just the 2nd time and it was an eye opening experience.  I brought my sons, ages 15 and 13, with me to volunteer. The day began for Russell at 5am when he and other volunteers arrived at church and began to prepare enough food to serve 300 meals.  This usually consists of 48 dozen eggs, 300 biscuits, a very large pot of white gravy, 300 cinnamon rolls, and lots of juice or coffee.  After loading the food and saying a prayer, we departed to Unity Park near downtown Fort Worth. When we arrived, my sons and I were struck by the large numbers of homeless in the area.  They seemed to be everywhere in and around the park.  There were people sleeping on the street just a few feet from where we parked the car.  Organizers who helped coordinate the event had the homeless get into a single file line while volunteers served them.  My sons and I were struck by just how poor they seemed, given their appearance.  The most humbling part of serving them was seeing small children with their parents.  We saw probably 10-20 children.  One family in particular had a child in a stroller who was about 18 months old, and and three small boys not older than seven.  It was very cold outside as temperatures were in the low 40’s.  To be exposed to the elements in freezing weather for a few hours is one thing, but to live in it everyday is another thing completely.

Last year, Russell and members of his church handed out 1000 pairs of socks to the homeless.  I asked him, why white socks, and not color socks, or even clothes?  His comment was that they did a clothing drive in the past and it created fighting, stealing, shoving, and everything else- and it was difficult to accommodate for men, women, and children of various sizes and tastes.  Most homeless do not own multiple pairs of white socks.  If they do, they use several pairs of socks on very cold nights to cover both their feet and hands.  Socks are so valuable for someone who is homeless, especially during a cold winter. He and his church have set a goal this Christmas to hand out 2000 pairs of socks, and they could use your help.  If you are interested in helping Russell and his Church in their homeless ministry, please feel free to make a donation to the Tabernacle Baptist Church, care of Russell Farris, 12440 Rendon Road, Burleson, Texas, 76028.

Many of us will serve others when we are called upon to do so.  But too many of us simply wait to be called upon before they serve.  We need not wait for others to ask before we get involved in serving others.  Service is more than serving in your calling at church, or helping a family move into or out of the ward.  It’s going where others are in need, and offering of your time and possessions to those who are less fortunate.

Jason Husk grew up in both Northern California and Phoenix Arizona and has lived in the Fort Worth Texas area since 2006. He and his wife are the parents of 4 children and he works as a financial advisor for a small wealth management firm in Arlington, TX. He is currently serving as a counselor in the Elder's Quorum and is passionate about politics and fantasy football.

All posts by Jason Husk