See, Now THIS Is Our Problem 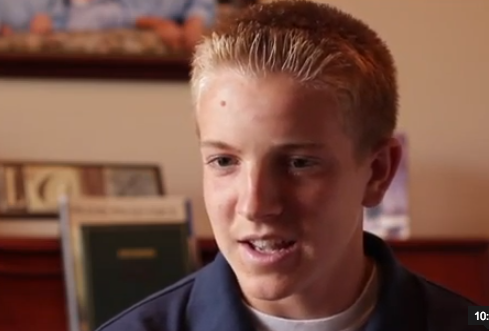 By Katey McGregor
By now we’ve all seen it, the video of the young men telling young women what they most want in a girlfriend/wife. If you haven’t, stop reading, and go watch it here before continuing.

Ok, all up to speed? Good. “Thoughts On Girls” is more than a travesty, and heartbreaking to say the least. As a twenty-three year old woman, I’m not so far removed from my pubescent years and unfortunately Young Women’s is still a vivid if not disturbing memory for me. Even though it was only a few years ago, thankfully I think I’ve changed quite a bit from the boy-obsessed nut job I was back then, and my independence has developed significantly. However, knowing who I was then versus who I am now, my first reaction upon viewing this video was, “Oh no. They’re showing this to teen girls???”

Now, I understand that every girl is different, but the years spent in teen-dom are critical to forming self-confidence, personality, independence, and views on the world and relationships that will continue to solidify for the rest of that person’s life. So showing a video to these girls that teaches them that not only should satisfying a boy’s wants and desires be their focus, but that the way they dress, behave, think, feel, and practice religion should be focused on whether or not some boy is going to approve of them.

Not a good plan.

As a young teen, my entire identity was centered on whether or not I had a boyfriend. I was so obsessed with this idea that I HAD to have one, and that if I didn’t have one then obviously there was a problem with me. Satisfaction in my own self-identity could only be achieved by attaining the attention and approval of a boy, and it didn’t even matter who he was; he just had to like me, and everything would be perfect. So when I turned 16 and there wasn’t a line of suitors out my door, I truly believed that I was worth nothing.

Maybe my experience was slightly more intense than most, but I started to think about how this video would have affected me if I had seen it back then. How sad to think that I would have abided by the Church’s dress standards not because Heavenly Father has required it of me, but because some pimply teenage boy told me to. How disturbing to think that I would have heard one of them tell me that in order to make him happy I would have to, “Cook really well… have lots of babies… support him in everything he does.” Going to college and becoming educated obviously would not have made a boy like me. Getting involved in extra-curriculars would not have made a boy love me. When such a huge part of a young girl’s identity is yet to be defined, approval from others is key in developing who she is and who she will be in the future. Do we honestly want our women to be molded according to the whims of a teenage boy?

Now, maybe I’m not cutting the boys enough slack. Obviously, they are very young and haven’t had a chance to develop opinions about what kind of girl they’d like to marry because they haven’t even had time to date very many. They only know what they’ve been told. And that’s the problem. This is what they have been told. The ideal woman but be modest- not because Heavenly Father has required it, but because it makes him “uncomfortable.” Another conversation could be started in relation to this; why does it make him uncomfortable? Maybe because women have be overly-sexualized by both the Church and society, and it seems that “sexually aroused” can now be defined as “uncomfortable”…but I digress.

These young men have been told what their ideal woman should be like. They haven’t formed their own opinions and they haven’t had their own experiences. It’s clear that they’ve probably dated few girls, if any. They want someone who will pop out babies and cook for them, someone who will laugh at all their jokes and support them in everything they do. Not once in the video were these young men asked about how they think they should treat women or even support them in their endeavors. Not once did one of those young men mention that their ideal woman would seek a career or even an education. The ideal woman would not place value on developing her talents or personality- she would just have a good sense of humor, which translates into thinking that everything he says is hilarious. Ultimately, this video provides us with a disturbing commentary on what is being taught to these boys- that women are there to serve them and make them feel special, with no emphasis on appreciating who she is on a personal level. The focus is on making sure that she is there for him in the ways that he wants, behaving in a way that he approved. And this is what’s being taught to our girls. Develop into who he wants you to be, not into who you want you to be.

This gap between what should be taught and what is actually taught is saddening and ultimately threatening to the health of these youths’ future relationships and relations towards each other. These young girls need to be taught that they do not exist to ensure the pleasure of the men around them, but to be bright, educated, successful, contributing members of society. These young men need to be taught that their women have as much potential as they do to change the world, that they have needs, dreams, and goals that should be met just as much as theirs. Change towards achieving equality begins here, with the youth. And if this is what we are teaching- if this is what we are encouraging- we cannot hope that our women OR our men will ever live in the world that they deserve.

Katey is a student at BYU Hawaii. She studies marketing.

All posts by Katey M