Scarred, Broken, and Held in Trust 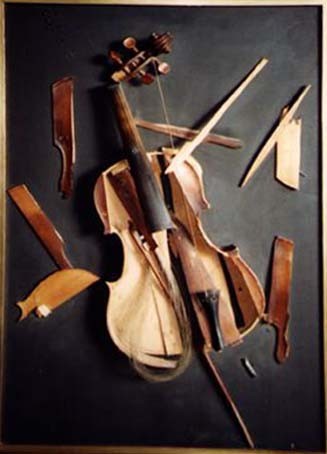 Someone else has left. Friend, family member, fellow guardian of once shared sacred truths. He’s found another path. Time will tell if she was called to this other path or if he was simply called away from our community, anywhere but here. He’s still here. God willing, she’s not going anywhere as a friend and loved one. But he can no longer identify as one of us. That’s okay, that should be okay, because we’re still figuring out what it means to be “one of us.”

A friend once wisely commented that when someone experiences the death of a loved one or a loss of faith (and these can sometimes feel identical), ideally the community would take those beliefs and hopes about the once-accepted sense of the world that now are shattered and hold them in trust, preserving them for when our friend and family member might be ready to receive them back again. Of course, she might never want them back. But entrusting ourselves with their beliefs and hopes is itself an act of faith that just might, in the end, be what saves us, if not them.

Our initial questions cannot be: Why did she leave? How can we get him to come back? What can we do better in the future? Oh, these questions will still be there, and they are significant, but they come because they are inevitable. We will get to them eventually. But we must attend to something else first before we can not just attempt to answer them, but live them, humbly and honestly.

What if, instead of gazing outward from our snug interior at the uncomfortable No-Man’s Land of self-imposed Exile, asking academic questions about causality and communal loyalty, we instead take upon ourselves the responsibility to become a sacred archive of trust? We take and catalog those scarred and broken objects that he or she once lovingly held close to their hearts, those beliefs and hopes that were once meaningful but have become too painful to hold, or too useless to implement. We tinker with them, polish them up so they work better than they did before, put our own names on them, tack them on to our own precious beliefs and hopes, make them shine a little brighter, function a little more imaginatively, and, hopefully, much less destructively. We write about them, speak about them, ask others to think about them differently, to see them in ways they have never been seen before, add our lamentations and questions and answers and provocations to the collective mass that has already gathered around them. We hold these beliefs and hopes and memories and understandings, and preserve them as pearls of great price, so that if and when they should ever return we are ready to give them back, labored over and spit-shined, ready to be put to use again, but in different ways, for different purposes, as reawakened memories that bond and redeem instead of nightmares that alienate and damn. Such a work requires knowing and loving the other person well enough to understand what she thought about her beliefs and hopes and desires, how they looked to her, what secrets they held, what feelings they provoked, what she now believes and hopes for in their place. Such a work requires that we understand our histories, including the histories of the marginalized and oppressed in our broader, majoritarian histories. It requires imagination and empathy and patience. It requires broad and deep reading, and listening and responding. It requires constant repentance. We must constantly change and revise and evolve in order to be archivists of sacred heart-objects.

Perhaps most dangerous of all, such a work requires co-authoring and co-ownership of what once we relinquished to the authority of others. This world full of the objects and contraptions of beliefs, hopes, magic, miracles, catastrophe, redemption, in which we are all natives or adopted citizens, is much larger than any institution or group of institutions that have sprung up to de-naturalize and correlate the things of this world. Whether we are the unthinking or the intellectual faithful, we have too often ceded too many of these objects to the authorities of these institutions, either believing the authorities to be their true authors and proprietors, or insisting that, whatever the origins of these objects of knowledge and belief, those in authority have re-branded and claimed them all, and there is nothing to be done about it except to rage against the machine. This world is ours if it is anyone’s, bequeathed to us no less than to anyone else, and we must claim those objects and architectures that make up this world and sear them with our own love, tears, and imagination. We must engrave our own names in them alongside the names of others who would claim them. The more names that are etched into these objects, the more weight they can bear.

It would be narrow-minded in the extreme to assume that because some have left and we have remained, that we ourselves will never have need of delivering our own worn-out hopes and beliefs to the archive, our once-precious treasures that we seem to have outgrown and out-loved, to be held in trust by others when we can no longer carry their burdens ourselves. Sometimes these objects are sufficiently bruised and battered that, even if we stay, we need to put them down for awhile, leave it to others to restore them and make them better, to think of grander, more creative ways that they can work and not break so easily, to reveal connections and redemptions and angles of light that we could not see.

One sign that we carry objects around like this that have, in fact, broken long ago, is when we are grateful for our certainty of timeless truths, appreciative of our status as the very elect who have not been deceived, relieved that we have done nothing to put ourselves in the position of these poor wayward souls who could not accept joy or see truth. Instead of recognizing that some of our belief- and hope-objects have been broken or scarred beyond recognition, and that this inevitably happens over the course of a lifetime, we insist that every object, entity, and thing are perfectly and timelessly tuned, perpetual-motion-belief-and-hope machines that are in no danger of slowing down or corroding. Then we wait until nearly every object in our world has shattered, and there’s nothing else to hold on to. When that happens, there is often nowhere else to go except anywhere but here. Or, worse, not being in a community that can archive and repair these worn-out objects, others insist that nothing is broken, that nothing could break, and when something does crack and disintegrates in our hands, we are to blame for carelessly mishandling them. Ironically, though the perfectly steadfast and effortlessly loyal were certain every object was unbreakable, now they have a very different solution: don’t touch the objects.

Instead, if we are fortunate, there will be those willing to be that archive of trust for us, those who understand that perhaps we will one day be able to believe all things and hope all things and endure many things–but probably not all at the same time, and maybe not in this life. Here, please take this; I cannot speak of it anymore. Its very name causes me pain and sorrow. But it’s a part of this world, of this community, for better or worse; perhaps someday we will all collectively discard it. But if not, I trust you to hold on to it for me, to understand what I thought about it and felt for it, perhaps figure out a new name for it, plant it in a new landscape where it can grow in different soil, be set against a different sun in a different sky, and become something I can touch again and speak about, if not fully shoulder and claim as my own.

They may one day return. Or they may not. We may one day leave ourselves, even if only temporarily. Or we may stay forever. If our religion is real and not fantasy, we’ll take seriously the proposition that if love within our communities is real, if it can be enacted in the bodies of real human beings made up of darkness and light, there will be those that will be joyfully prepared to give us back what was once ours and much, much more.

If we can’t sing for them, this will be our song.

If we can’t preach on their behalf, this will be our sermon.

If we can’t die for them, this will be our final act of love.