Who Do You Say God Is? – Walker’s Womanism and Thoughts On A Black Christ 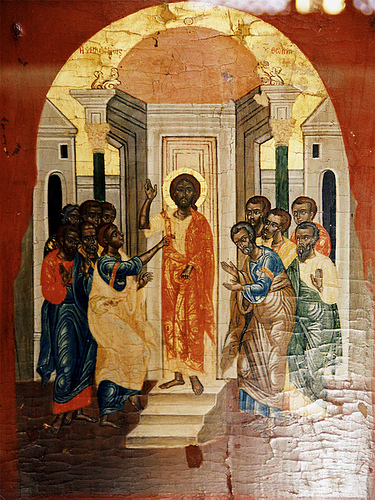 Well, us talk and talk about God, but I’m still adrift. Trying to chase that old white man out of my head. I been so busy thinking bout him I never truly notice nothing God make. [1]

Since the inception of the word “womanist” in 1983, the term itself and its meaning has ebbed and flowed through public and private discourse as an allegory of black women and the relationships that are formed with the past, the present and the future. These relationships do not directly focus on perpetual victimization, but rather, the building of physical, spiritual, emotional and mental connections that strengthen ones sense of the self, the world and the divine spirit.

In the book, In Search Of Our Mothers’ Gardens, author Alice Walker describes a womanist as:

A woman who loves another woman, sexually and/ or non sexually. She appreciates and prefers women’s culture, women’s emotional flexibility…[she] is committed to the survival and wholeness of an entire people, male and female. Not a separatist, except periodically for health…loves the spirit…loves struggle. Loves herself. Regardless. [2]

From this ‘love of the spirit’ emerged a theology conceptualized from the unique experiences of black women. One that separated itself from (white) feminist theology and black (male) liberation theology.

There have been long standing connections between people of black African descent and the God of the Old and New Testaments of the Bible, beginning with chattel slavery in the United States. When white preachers were speaking of divinely sanctioned servitude over the pulpit [3], the conversion from traditional African religious and spiritual beliefs to Christianity provided a base for enslaved black Christians in the United States to find some comfort in the redemptive power of Jesus Christ, who many believed once suffered as they did only to ultimately conquer sorrow and death. Many black liberation and womanist theologians have described this vision of the Savior as the ‘Black Christ’, his Blackness being symbolic of oppression or a reference to black as a physical attribute [4]. This concept of Christ (as part of the Trinity) allowed for black people to transcend notions of an omnipotent White racist God the Father and Son while simultaneously rejecting the incompatibility of the teachings of Christ with the actions of white Christians who engaged in racism.

Similar to Mormon theology, personal revelation is instrumental in the progression of the spirit. In the quote shown above from the book The Color Purple, the main character Celie discusses her relationship with a god who is distant and unfamiliar. Celie’s god is a repressive white male figure with whom she couldn’t grow close to. It is through her interactions with the character Shug on the topic of God that highlights the transformative power of one seeking and uncovering an individual image of God in the face of immeasurable pain and suffering. I often remember this moment in the book when I think of an experience I had in the temple in which I came upon a portrait of Christ in Heaven surrounded by all white angels. Seeing Christ depicted as a fair-skinned, brown-haired and blue-eyed man was nothing new to me but the experience provided an opportunity to reflect on the double consciousness that is created as a result of what was once, and for some still is, a divinely inspired perception of people of color as other versus what the scriptures say about God’s relationship with all of us [5]. That if I was to remain an active Mormon, I had to separate myself from the idea of a racist god who changed his mind about black people in 1978. It was then that I stopped chasing an old white racist male god and embraced a God and Christ who empowers and uplifts.

While black liberation theology has traditionally centered on the concept of the Savior’s life, death and resurrection through the experiences of black people in the scope of the male experience, I have found my faith through a womanist theology that encapsulates the manifestation of a divine spirit that does not embody the oppressor.

[3] Stringfellow, A Scriptural defense of slavery, 1856