The Rise of Modern Mormonism 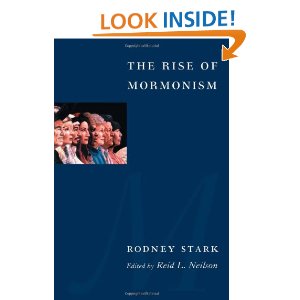 I volunteered to give the presentation on Mormons, it sounded like a good idea at the time, for my New Religious Movements class. My presentation pulls form the work of Rodney Stark. At the time of his work, he asserted that the LDS Church is the fastest growing religion in the world. While I had heard Starks work quoted occasionally online, I had not read his book, The Rise of Modern Mormonism. I found the book to be a fascinating and frustrating read.

I found some of these conditions to be rather interesting. I found the issues of socialization something I have been pondering over the last few days. I often wonder how well we are doing at socializing our youth to move into a modern world. I often feel that the gender socialization reflects more a 1950s worldview rather than a modern one. What do you think about this list of conditions necessary to new religious movements to survive? While Stark does contrast other NRM that have NOT survived with Mormonism, he does not adequately compare and contrast other NRM such as the Seventh Day Adventists, and the Jehovah Witnesses, which I think would be essential to strengthening his arguments and theory.

If you were to give a presentation on the rise of Modern Mormonism and the possibility of the LDS Church in the future, what would you add? What do you think the Church’s strengths and weakness will be going forward?