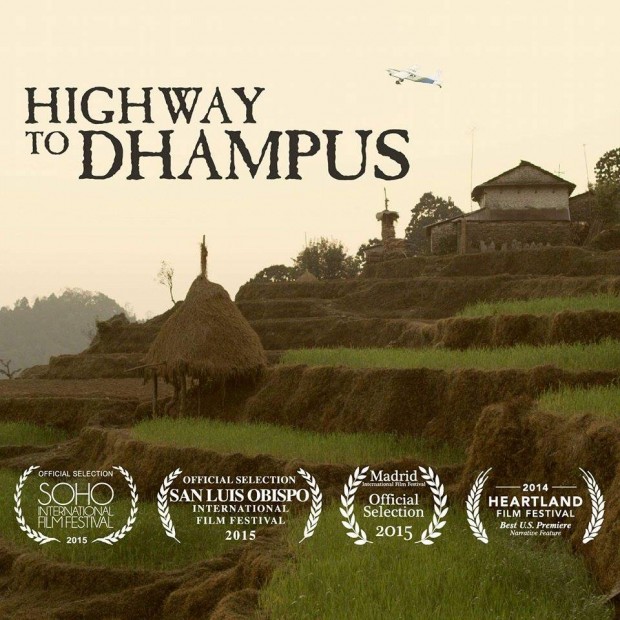 My husband and I were recently able to see Highway to Dhampus, written and directed by Rick McFarland.

The basic storyline is that a socialite, Elizabeth, is trying to repair her image by visiting an orphanage in Nepal, and being photographed doing so. She is accompanied to the remote orphanage by an American photographer, Colt,  and a native Nepalese pilot named Ajit.

The photographer is there strictly for business. He is bothered by Elizabeth’s selfishness and inability to see anything beyond herself. He has no interest beyond getting the job done.  Their pilot is equally unimpressed with Elizabeth and dislikes that she doesn’t have pure intentions.

In the trailer we see the headmistress of the orphanage tell Ajit, as he is venting his frustration with her intentions, that “The children don’t see intentions”.
I loved that line. It reminded me of the pure innocence and goodness of children. It also made me remember that my kids usually see the good in me and not the failings that I constantly tear myself up over.

Highway to Dhampus was filmed beautifully. The mountains and scenery in remote Nepal were amazing.  I really enjoyed the long scenery shots and the beautiful music to accompany them.

Beyond the beautiful setting, the story of the film was what really touched me and caused a lot of deep introspection.

My life has taken me on an interesting path. In 2011 we lost twin boys at twenty weeks due to preterm labor. When one loses a child, or really any loved one who is taken too soon,  it forces an introspection to look deeper at life, death and life after death.

Director Rick McFarland wrote this film to reflect on elements and characters of his own life. He talked about how his mother had passed away and how he incorporated loss into Highway to Dhampus. This, of course, hit a very personal chord with me, having dealt with losing my babies and mourning the loss of experiencing life with them.

The other reason why the subject of loss and death in the film touched me so personally is that I actually work in that line of business now. My every day life is filled with the loss of life and the people it effects.

Back in December, I stumbled upon a job posting for a monument company in need of a designer for headstones and was offered the position. I turned it down after being unable to make a schedule work. Later that month I had to grapple with the unfairness of death again after my otherwise healthy and “was going to live until he was at least 100” grandfather passed away due to lymphoma at age 86.

When the monument company came back to me six months later and offered me the job again,  things all aligned and we were able to work a schedule out. With the flexibility I was offered, the age of my kids, and the depression stemming from feelings of inadequacy and my perceived failure as a stay at home mom it just made sense to take the job.

I have been working with this company for three months now and I am constantly touched by the love that people have for those they have lost. For me, it has been a deeply satisfying business to be in.

I share all of that because I was so truly and personally touched by the scenes in which death and loss were touched on in Highway to Dhampus.  I was in tears, and I wasn’t alone. There were a LOT of sniffles filling the theater.

There is a scene where Ajit and Colt take Elizabeth to the local temple. Ajit, the local pilot, tells Elizabeth that in Nepal they believe in reincarnation and talks about the smoke rising into the air and the person returning to the sky, an earth element from which they came. Elizabeth then realizes that the burning pyres they are looking down on at the temple are bodies being cremated. It feels shocking for a second, and then the beauty, love, and meaning of the ritual takes over.

Highway to Dhampus just got me in so many places and made me want to be a deeper, kinder person. I left wanting to make my life more meaningful and give more of myself to my family and others. I was touched by the personal relationships the characters formed and enjoyed watching them all change for the better. Seeing this movie made me once again stop and remember those who have passed and imagine where or what they may be now. It was wonderful and beautiful to see how the dead are honored in another religion and culture.

Highway to Dhampus’ final Utah showings are tonight at the following locations:

For those interested, this was an informative video explaining a bit about Hindu cremation and is filmed at the Pashupatinath Temple in Kathmandu, Nepal. It is the same temple that Elizabeth, Colt, and Ajit visit in the film.  It may be a bit much for some, but I found it very interesting and touching to hear about how they prepare the body for cremation and what they use for the cremation process.

I was also very impressed with Kathy McFarland’s creation of a nonprofit organization, Mind the Gap Worldwide, which was inspired by experiences in Nepal while filming Highway to Dhamphus. Mind the Gap Worldwide was created to help bridge the gap for people living without basic necessities.  It’s focus is on projects that help people secure six things: clean water, food, clothing, and shelter, as well as access to education, and health care.