“Religious freedom is under attack!”: explained 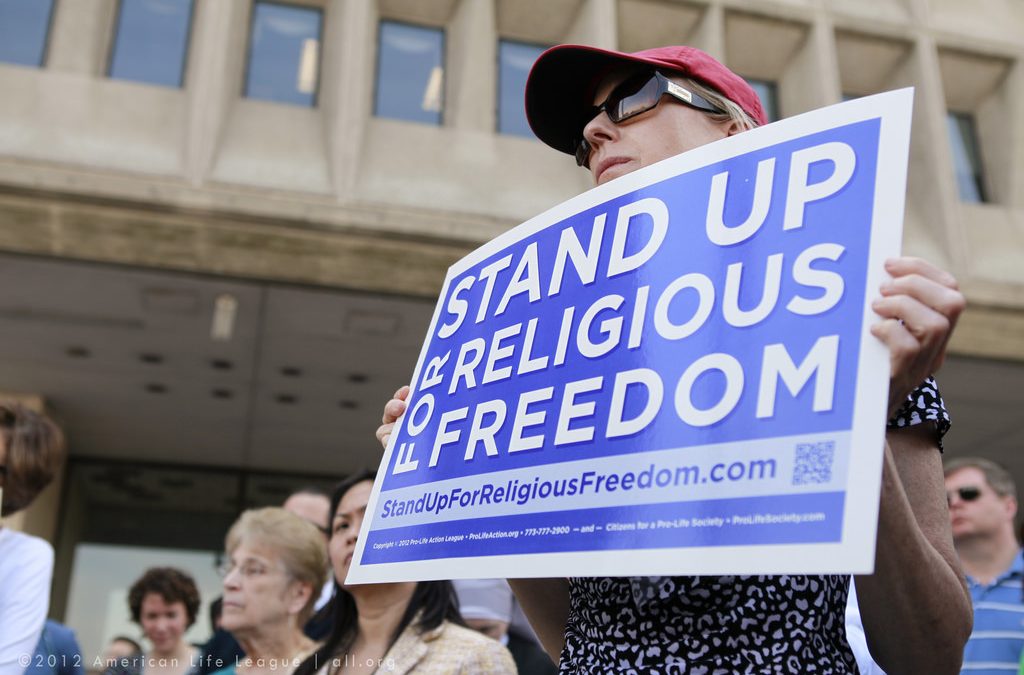 In the aftermath of the 2015 U.S. Supreme Court decision that legalized same-sex marriage across the country, many religious conservatives and conservative religious institutions stepped up their warnings that “religious freedom is under attack” in the United States and around the world.

For its part, the LDS Church has recently engaged in a high-profile campaign to promote religious freedom and to educate its members and the public at large about what it is identifying a clear threats to individual and institutional freedom of religion. The topic has become increasingly more common in General Conference talks and other public statements by LDS General Authorities.

Religious progressives and political liberals alike often tend to downplay these concerns, seeing them as exaggerated responses to a non-existent problem. After all, when does the government ever stop anyone from attending whatever house of worship they want in the United States? How many Americans are being imprisoned simply for belonging to an unpopular minority religious group?

The reality is that this issue is more complicated than either side would like to admit.

With very few exceptions, U.S. Courts have almost always held that people are free to believe whatever they want. They have also been extremely hesitant to place limits on what individuals and religious organizations are permitted to publicly say regarding their religious beliefs.

The Courts have, however, held that people are not allowed to do whatever they want in the name of religious freedom. Ironically, the first major Supreme Court case to test this was Reynolds vs. United States where the Court argued in 1878 that the U.S. government was within its rights to enforce anti-polygamy legislation against members of the LDS Church. In essence, the Court held that while the First Amendment protects just about all forms of religious belief and expression, it does not universally protect all forms of religious conduct.

One of the recent applications of this principle comes when an individual or organization claims that they should be exempt from a generally applicable law on the basis of religious freedom. Several high-profile examples include Christian business providers who decline to offer their services for same-sex weddings, including bakers, florists, and photographers.

Their argument is that the First Amendment free exercise clause (and sometimes freedom of speech/expression clause) should allow them to (politely) decline to offer their services as doing so would, in their view, constitute an endorsement of the ceremony which does not align with their religious views. The opposing argument is that while the Constitution does indeed protect freedom of religious expression, it does not protect behavior, even religious behavior, that formally discriminates against minorities in public venues such as places of business. They argue that declining to offer the service is a form of discrimination which emotionally and/or psychologically harms the potential customers.

When a judge is called upon to decide cases such as this, they apply a series of standards found in the Religious Freedom Restoration Act. As explained by Sean Davis writing for The Federalist:

The RFRA statutes, which currently bind nearly two dozen state governments as well as the federal government, require courts to use a simple balancing test when weighing the facts of specific religious freedom cases. The laws state that the government may only substantially burden the free exercise of religion of a person or organization if the government 1) has a compelling interest to do so, and 2) is using the least restrictive means possible to further that compelling interest. In legal parlance, RFRA requires courts to use strict scrutiny when adjudicating these types of cases.

In cases concerning wedding service providers, a judge would need to determine:

1) Would requiring a business owner to provide services for a ceremony that they disagree with impose a “substantial burden” on them? For example, would they be fined by the government for failing to comply with a non-discrimination law?

2) If so, would requiring a business owner to provide services for a ceremony that they disagree with contribute to a “compelling interest” on the part of the government? In other words, is there a good reason to require someone to do something they feel that they should not be required to do? In this example, is preventing discrimination of sexual minorities a sufficiently “compelling interest” for the government?

3) If so, is there another way to go about achieving this compelling interest (preventing non-discrimination) in a way that still allows the business owners to decline services to same-sex weddings?

So is “religious freedom under attack” in the United States?

Religious conservatives have a point when they argue that their religious liberty is being threatened by cases such as this. Technically speaking, requiring a Christian baker to provide a wedding cake for a same-sex marriage ceremony against that person’s sincerely held religious beliefs is a restriction of that person’s freedom of religious expression and action. That is a legitimate claim.

That being said, liberals have a point when they argue that the government routinely restricts people’s freedom all the time to prevent harm to others. For example, the government restricts our freedom to go around punching each other in the face. In this case, the Civil Rights Act stipulates that the government restrict our freedom in the interest of preventing discrimination on the basis of race and/or ethnicity. Liberals ask why this particular issue should be any different. Given the historical reality of discrimination against the LGBT community, that is also a legitimate claim.

How, then, do we decide between the two? Is there a way to allow business owners to decline to provide services for same-sex weddings while still removing the possibility of discrimination against same-sex couples? Is there a way to compromise in this case? Or is it a mutually exclusive, all-or-nothing solution? That is something we are currently working out as a society.

In my view, conservatives would do well to ratchet down the hyperbolic rhetoric on the issue. “Religious freedom is under attack!” is unnecessarily combative and divisive, as well as a “bumper sticker” solution to an extremely complicated and nuanced legal issue. It is also irresponsible (again, in my view) for religious leaders to use sensationalist language such as this in public or private discourse.

In my view, liberals would do well to recognize that the burden ought to be on those who argue for a restriction on a person’s religious liberty. In general, a liberal democracy should allow people as much freedom as possible while still safeguarding the rights of all. It’s also helpful to try putting the shoe on the other foot. What if someone were to ask a baker to make a cake with an offensive racial, ethnic, or religious slur written on it? Should the baker be free to refuse on moral or religious ground? If so, what guidelines should then be used to decide when and where a service provider can refuse to provide services on the basis of conscience or religious objection? These are not easy questions.

It’s also important to remember that religious freedom really is under attack in many parts of the world. I think liberals are a little too quick to forget this when they hear the leaders of a global religious organization talk about religious freedom. I think that conservatives, though, are a little too quick to claim a moral equivalence between baking a cake for a same-sex wedding and getting thrown in jail for one’s religious beliefs.

Finally, there is no realistic basis for worry that the LDS Church will be forced by the government to conduct same-sex marriages in its temples or chapels, nor is the Church’s tax-exempt status going to be seriously threatened for allowing only heterosexual marriages in its buildings. This is not going to happen any time in the foreseeable future and anyone who says otherwise needs to calm down and do their homework. (Of course, this could change if for some reason our government were to become significantly more authoritarian or illiberal…)

For those interested in learning more about this topic, I highly recommend The State and Religion in a Nutshell which gives an excellent overview of the intersection of religion and public law in the United States.