The Relief Society is Not a Women’s Organization 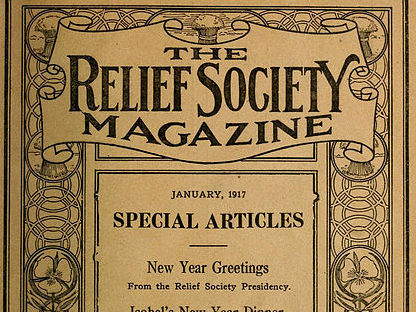 After the Women’s March a few weeks ago (you know the one, there was no doubt a contingent near you) there was this Facebook post making its way around the internet equating that grand action with attending Relief Society.  It was quite the leap. 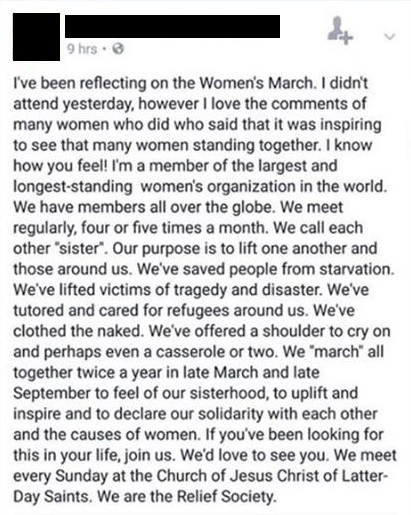 Let’s back this up and go over a basic timeline of Relief Society history.

The Relief Society of Nauvoo was founded in 1842. The way this gets discussed in church, you’d think it was because the Lord decreed it so right at that time.  The reality is that women’s organizations like this were very popular at the time, and Mormon women were far from the first to form one.  What is noteworthy is that, at this point, it was entirely a women’s organization. They had their own membership rolls, leadership, and they paid dues.

The Relief Society of Nauvoo was disbanded in 1844.  I’ve learned that this will come as a shock to many–especially given that the church celebrated the sesquicentennial anniversary of the Relief Society in 1992. Alas, it had not been around for 150 years because in 1844 it ceased to exist for quite awhile. It was disbanded because women like Emma Smith were using the organization to speak out against polygamy and Brigham Young wasn’t having it. (True story. Check it out in The First Fifty Years of Relief Society.)

Women’s coalitions started popping up in local wards again in 1851. In 1866 they made it official again. For some time it is a pretty amazing organization. They join the National Council of Women, fighting for suffrage. They build hospitals. They start holding their own general conferences. They build their own buildings, and they create their own manuals. They have their magazines.

But then something happens.

They lose their buildings, and they lose their magazines. The church takes ownership of the hospitals and co-opts their conferences. Before you know it, instead of having their own meetings and their own budget and their own agenda, they are meeting in a three-hour block of church that is presided over by men who grant them meager budgets and approve/dictate their agendas. No longer do women even run this organization on their own.  Can it be called a women’s organization if women do not own it?

It is referred to as an auxiliary. It is supplementary to the organization to which it belongs. Can it even be called a women’s organization when it is just an auxiliary to a larger one that is run entirely by men?

I submit that you cannot.