Relief Society and the Priesthood

Two weeks ago I was asked to give the Monthly Relief Society Lesson on the Leadership Training Broadcast on the Priesthood in the home and then the Relief Society President also asked me to add in how the sisters can come to value Relief Society more, and feel the power and the potential that we have as sisters.  The following lesson is what I gave on Sunday and it was amazing.  I have a testimony how powerful the Relief Society can be, and how we need to find our place as equals to the Priesthood Quorums- not identical, but equal. 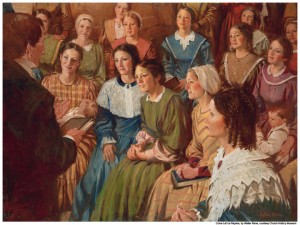 • Frame how history is often more clear, as we get further away because our tools are better, and we find better source material thanks to archiving and cataloging.

• The church is really working on employing the best historical techniques available. It has an amazing history of archiving and keeping documents. In the late 1970s- 1980s they began to systematically archive and organize the documents. And now the church history dept. wins historical awards for how well they not only preserve and study data but the way in which they open those documents up to scholars, members and non members a like. I really emphasized how great the church history department is and how we should be very excited about the work that is going on in Mormon history.

• The fascinating thing is that we often teach history in the form of timelines, but they are not flat, filled with dates, there is are layers and layers of human complexity, – line drawing

• “Don’t confuse the power of the priesthood with the keys and offices of the priesthood,” Sister Beck said. “The power is limitless and is shared with those who make and keep covenants. Too much is said and misunderstood about what brothers have and sister’s don’t. …Our responsibility, Sister Beck said, is to make sure that our homes are blessed with priesthood power, as the Primary song says, “every hour” (Children’s Songbook, 190). “It isn’t just when Dad is there. It isn’t just when Mom is there. It isn’t just when a priesthood ordination or blessing is being performed. It’s every hour as covenants are made and kept.”

• But God is always calling us to find and live up to our privileges. And as Sister Beck said this starts when we know the history of the Women in this dispensation and I would add those women how are our spiritual for bearers.

• History of Women in the OT and NT holding valuable leadership positions. Jesus first appeared to Mary Magdalene and told her to tell his apostles about his resurrection. She has thus been called “apostle to the apostles”

Deborah- how we often tell her story incompletely.

We discussed what a Prophetess was

Greet Andronicus and Junia, my relatives who were in prison with me; they are prominent among the apostles, and they were in Christ before I was.

• The Joseph Smith Papers Project- and the RS minutes and how it changed quotes about what we thought JS said regarding the Sisters purpose.

• In these foundational sermons, Joseph Smith instructed women regarding “the order of the priesthood.” including the keys, offices, ordinances, gifts, and blessings of the priesthood. He thereby prepared them to participate in the sacred ordinances to be administered in the Nauvoo Temple at its completion. He also encouraged the sisters in their important charitable work and expounded at length upon the broader meaning of charity.

• He announced, “the Society should move according to the ancient Priesthood.” This, he declared, required “a select Society separate from all the evils of the world, choice, virtuous and holy.”[15] This was the beginning of the Society’s understanding of his repeated references to the “ancient Priesthood.”

23 And now, he imparted his word by angels unto men, yea, not only men but women also. Now this is not all; little children do have words given unto them many times, which confound the wise and the learned. I love how this verse teaches that God ministers unto all of us.

• Spiritual Gifts are available to all

• Talked about how the budget changes were hard but give us the opportunity to really serve and not worry about money. We talked about the loss of autonomy the RS faced and how that made some of the sisters who lived through it sad.  I though this was great.

• So how do we as women live up to our privileges, how do we claim the blessings that God is wishing to bestow on us personally and as a RS? How do we become what God has asked us to become? How do we move past labeling who is married, how has kids, who is _____.  How do we get YW excited to come to RS.  We also talked about how YW are leaving the church faster than the Boys (see shield of faith) and how we need to think of ways to correct that.

This was an amazing lesson.  I was so happy that we could talk about the history of the Relief Society and discuss how we can become what God wants us to become.  I really do think that too often when we talk about the Priesthood we talk about supporting men.  But I firmly believe that God intended RS to be something extraordinary, something that will change the world.  And we support the priesthood by being proactive in doing the work of God.