Rejoicing With Those Who Leave 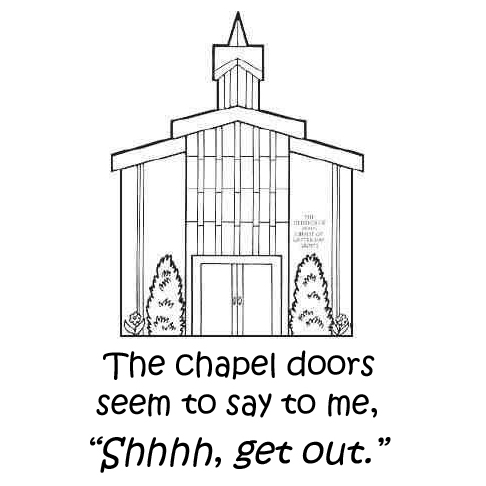 In the April General Conference, President Rosemary Wixom shared the story of a young mother who had left the Church. The woman did so not “because of bad behavior, spiritual apathy, looking for an excuse not to live the commandments, or searching for an easy out” but as part of her lifelong search for truth. That search was something she had learned at home, in Primary, in Young Women, and in seminary. She left because she was teachable and was not finding answers within the Church. Only after finding a separate space for herself was she able to further develop her faith in the Savior and testimony of basic gospel truths.[1]

Like this woman and many of our peers, my wife has chosen to leave the Church in her quest to develop a closer relationship with the Savior and to learn what she really believes.

For her family and many other church members we know, this decision is a cause for mourning. As word spread in the ward that I still attend, I began to receive consoling comments from those around me. When she occasionally attended a meeting or activity, she was greeted with meaningful hugs from members she hardly knew. (Which, by the way, did not make occasional attendance any more appealing.)

This sense of mourning is a perfectly natural reaction if we focus exclusively on that single change: she did attend church and now she doesn’t. That’s a neatly wrapped narrative of fall. But like the original Fall, what has really taken place is more complex and positive than it might initially appear. There is plenty of reason to rejoice.[2]

Like the young mother in Pres. Wixom’s talk, my wife struggled for years over what she believed and where she fit in the Church. Diligent study, attendance, and serving in callings did not solve this struggle. Though we had close friends in our wards, she rarely found attendance to be uplifting or inspiring. Instead, her questions mounted alongside frustration with those who were intolerant of the ideas or struggles of others. The Church was decidedly not leading her to Christ or bringing peace into her life.

Faced with this continuing frustration, my wife chose to prioritize her testimony of the Savior over her participation in the Church. As with any act of true discipleship, this decision wasn’t easy. But it was absolutely the right decision, one that has blessed her and our family.

It was the right decision because it was an active decision to follow the Savior. She chose to be a “thing to act” in developing her testimony instead of a “thing to be acted upon” by the Church, to use Lehi’s language.[3] After years of wrestling to build her testimony of the Savior in spite of the discomfort she felt within the Church, my wife is now acting with greater courage and effort than were required of her within the Church. And with that courage and effort come positive, Christlike growth.

It was the right decision because her new church encourages her to seek Christ. There, my wife can more easily connect with the Savior because she is comfortable being herself. She is welcomed for who she is while simultaneously being encouraged and supported in her spiritual growth. She is invited to do meaningful service for strangers in need with much greater frequency. She finds peace and a sense of worship that was lacking for her in the LDS Church. There’s a far greater focus on living as Christ would have us live – literally following the example of His life – than making sure she doesn’t violate a set of standards. That’s both inspiring and fulfilling.

It is true that this change arose from a struggle with doubt and uncertainty. But that struggle existed even while my wife was active and dedicated to the Church. That her struggle is now public knowledge is a sign not of crisis but of progress. She made a difficult decision to seek after the Savior, despite the pressures around her. That is something we should be ready to celebrate.

Has her search led her to the same certainties proclaimed by me or other believing Latter-day Saints? No. But her aim is right and I have faith that Christ is guiding her now more than ever. She’s been led to good people as part of that journey and I am grateful for what they have given her.

The woman in Pres. Wixom’s story described the state of her testimony when she left the Church in these words, “My testimony had become like a pile of ashes. It had all burned down. All that remained was Jesus Christ.” Unfortunately, In the Church, we don’t make this level of belief very easy.

Though we proclaim faith in Christ as the first principle of the gospel, in practice we often demand that members start with Joseph Smith and the Book of Mormon, building outwardly from there to accept all of our peculiar doctrines. Members with doubts about these doctrines receive powerful signals from fellow members to quiet their questions, accept the testimony of others, and keep their spiritual journey to themselves. We celebrate those who return but are rarely willing to put aside our formulaic work on Church programs to administer to those in the midst of these transitions.

What would our wards and stakes be like if we instead lived this counsel from President Dieter F. Uchtdorf?

“In the end, we are all pilgrims seeking God’s light as we journey on the path of discipleship. We do not condemn others for the amount of light they may or may not have; rather, we nourish and encourage all light until it grows clear, bright, and true.”[5]

That is what we’re doing now, in our own family. We attend different churches and worship in different ways, but “we talk of Christ, we rejoice in Christ, we preach of Christ, [and] we prophesy of Christ” with greater frequency, openness, enthusiasm, and meaning than we did before.[6] Together, the Light of Christ in our lives is growing clearer, brighter, and truer. I hope other members can join us in rejoicing with those who make difficult decisions to follow the Savior, even if discipleship takes them on a journey outside of our church.