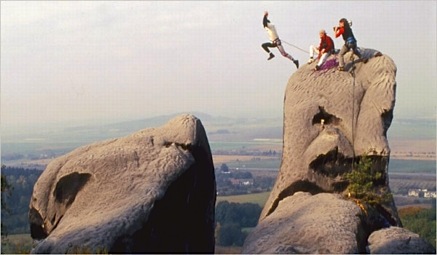 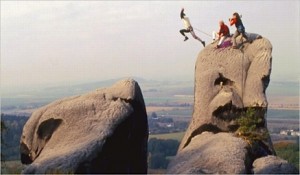 These thoughts grew out of a very simple post in an online Mormon discussion.  After some internal debate I’ve decided to let the following quotes speak for themselves without much interruption from me.

What I’m referring to when I say eternal progression is the ability for us to progress between kingdoms post resurrection and final judgment.

We should first ask, what is the official position of the church?  There isn’t one. The only official statement we have on the subject is a letter from the First Presidency:

-Secretary to the First Presidency in a 1952 letter

That hasn’t prevented some of the Brethren from sharing their opinion. Some members incorrectly assume that anything said by a General Authority is doctrinal and binding upon the church.  That’s not the case.  In May of 2007 the church put out a well thought out press release aptly titled “Approaching Mormon Doctrine.” In part it says, “Not every statement made by a Church leader, past or present, necessarily constitutes doctrine. A single statement made by a single leader on a single occasion often represents a personal, though well-considered, opinion, but is not meant to be officially binding for the whole Church.”  When the church has no official doctrinal position on a given subject it is our privilege as Saints to exercise some faith and discernment in an effort to develop our own beliefs.

There are a number of conflicting statements from a handful of General Authorities asserting that progression is indeed possible post resurrection/judgment and naturally there are others who reject this idea.  I haven’t included any statements that reject the idea of progression between kingdoms in the eternities.  Primarily because I think they are wrong and I don’t care to advertise their mistaken beliefs.

That being said, here are three of the most forceful statements in favor of the idea of eternal progression between kingdoms.

“I am not a strict constructionalist, believing that we seal our eternal progress by what we do here. It is my belief that God will save all of His children that he can: and while, if we live unrighteously here, we shall not go to the other side in the same status, so to speak, as those who lived righteously; nevertheless, the unrighteous will have their chance, and in the eons of the eternities that are to follow, they, too, may climb to the destinies to which they who are righteous and serve God, have climbed to those eternities that are to come.”

“Some years ago I was in Washington, D.C., with President Harold B. Lee. Early one morning he called me to come into his hotel room. He was sitting in his robe reading Gospel Doctrine, by President Joseph F. Smith, and he said, “Listen to this!

“‘Jesus had not finished his work when his body was slain, neither did he finish it after his  HYPERLINK “http://www.lds.org/topics/resurrection?lang=eng”resurrection from the dead; although he had accomplished the purpose for which he then came to the earth, he had not fulfilled all his work. And when will he? Not until he has redeemed and saved every son and daughter of our father Adam that have been or ever will be born upon this earth to the end of time, except the sons of perdition. That is his mission. We will not finish our work until we have saved ourselves, and then not until we shall have saved all depending upon us; for we are to become saviors upon Mount Zion, as well as Christ. We are called to this mission.’”

“There is never a time,” the Prophet  taught, “when the spirit is too old to approach God. All are within the reach of pardoning mercy, who have not committed the unpardonable sin.”

And so we pray, and we fast, and we plead, and we implore. We love those who wander, and we never give up hope.

I bear witness of Christ and of the power of His atonement. And I know that “his anger kindleth against the wicked; they repent, and in a moment it is turned away, and they are in his favor, and he giveth them life; therefore, weeping may endure for a night, but joy cometh in the morning.”

““It is reasonable to believe, in the absence of direct revelation by which alone absolute knowledge of the matter could be acquired, that, in accordance with God’s plan of eternal progression, advancement from grade to grade within any kingdom, and from kingdom to kingdom, will be provided for. But if the recipients of a lower glory be enabled to advance, surely the intelligences of higher rank will not be stopped in their progress; and thus we may conclude, that degrees and grades will ever characterize the kingdoms of our God. Eternity is progressive; perfection is relative; the essential feature of God’s living purpose is its associated power of eternal increase.”

Here’s where I think things get interesting.  If you choose to reject this version of eternal progression, why?

If given the option between an eternity where people “get what they deserve!” and are damned for all eternity; or an existence where we can all make a free will choice, at any time, to accept the atonement of Jesus Christ and progress at a pace and trajectory that is comfortable to us, why not the latter?

What does our choice between two reasonable arguments say about us when one option is damnation and the other is universal salvation?

Does our sense of fairness override our covenant (love) relationship with one another?

What does a rejection of eternal progression say about our understanding of the Atonement?

Is the atonement infinite (reference to time) and eternal (nature or quality)?

Is it prudent to place time constraints on Gethsemane?

And finally, is God powerful enough to save every son and daughter that wants to be saved?

Each time I revisit this issue I can’t help but be reminded of the laborers in the vineyard.  Are we a laborer that complains about our wage relative to others?  Or are we laborers who are truly happy that everyone at the end of the workday has sufficient for his or her needs. (see Matthew 20:1-16)