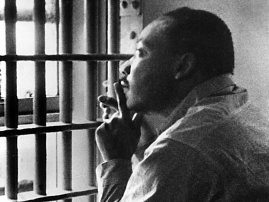 “In spite of my shattered dreams of the past, I came to Birmingham with the hope that the white religious leadership of this community would see the justice of our cause and with deep moral concern serve as the channel through which our just grievances could get to the power structure. I had hoped that each of you would understand. But again I have been disappointed.”

King goes on to write, “I have longed to hear white ministers say, follow this decree (desegregation) because integration is morally right and the Negro is your brother.”

White Mormon leaders weren’t interested in what was morally right as much as they were maintaining Church practice, policy, precedent, and tradition. Racism and hate were oozing from our discriminatory practices and by extension some of our members. Seeing the Lord’s Prophets, Seers and Revelators unable to discern truth from error and hate from love is a jagged little pill.

“The contemporary church is so often a weak, ineffectual voice with an uncertain sound. It is so often the arch supporter of the status quo. Far from being disturbed by the presence of the church, the power structure of the average community is consoled by the church’s often vocal sanction of things as they are.”

It has been said that “a corrupt tree bringeth forth evil fruit.“(Matt 7:17) In this case the Church’s fruit was hate, fear, bias, segregation, pain, discrimination and oppression. What does that say about Mormonism and its leadership? Maintaining the status quo shouldn’t be an option when the alternative is the aforementioned offenses against humanity.

Finally Dr. King writes: “But the judgment of God is upon the church as never before. If the church of today does not recapture the sacrificial spirit of the early church, it will lose its authentic ring, forfeit the loyalty of millions, and be dismissed as an irrelevant social club with no meaning for the twentieth century. I meet young people every day whose disappointment with the church has risen to outright disgust.”

Years before King wrote his letter from Birmingham the First Presidency of the Church had released a statement that says in part,

“The position of the Church regarding the Negro may be understood when another doctrine of the Church is kept in mind, namely, that the conduct of spirits in the premortal existence has some determining effect upon the conditions and circumstances under which these spirits take on mortality and that while the details of this principle have not been made known, the mortality is a privilege that is given to those who maintain their first estate; and that the worth of the privilege is so great that spirits are willing to come to earth and take on bodies no matter what the handicap may be as to the kind of bodies they are to secure; and that among the handicaps, failure of the right to enjoy in mortality the blessings of the priesthood is a handicap which spirits are willing to assume in order that they might come to earth. Under this principle there is no injustice whatsoever involved in this deprivation as to the holding of the priesthood by the Negroes.” Letter from the First Presidency Aug 17, 1949

Recently an official statement on Race and the Priesthood was published by the Church stating,

“the Church disavows the theories advanced in the past that black skin is a sign of divine disfavor or curse, or that it reflects actions in a premortal life; that mixed-race marriages are a sin; or that blacks or people of any other race or ethnicity are inferior in any way to anyone else. Church leaders today unequivocally condemn all racism, past and present, in any form”

Whether we believe our prejudice and discrimination  was God’s will or an extension of cultural norms, the net result was the same- hate and oppression.