Rebecca at the Well or, Going the Extra Mile for the Camels 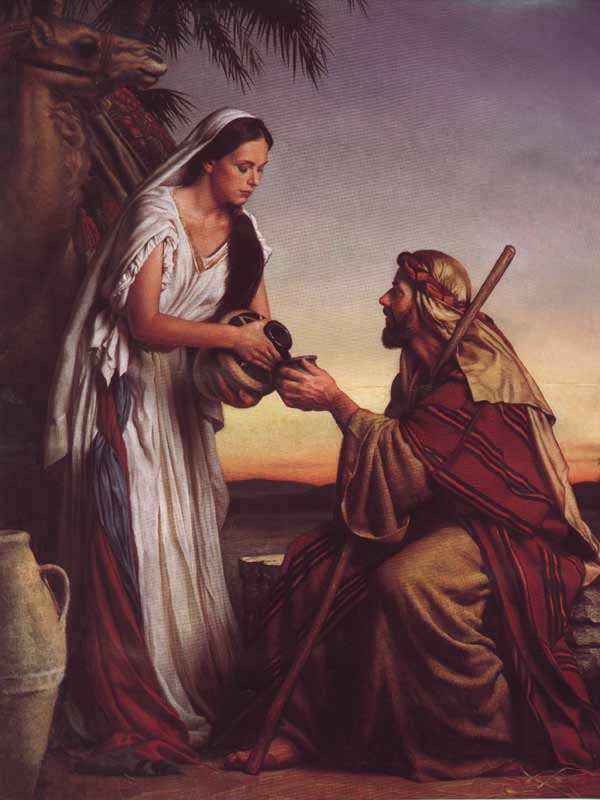 The story of how the servant of Abraham went looking for a wife for Isaac (Gen. 24), and found Rebecca is one of the most charming stories in the Old Testament. At least I think so. It is a tale taut with expectation and hazard. Abraham calls his servant and has him place his hand under Abraham’s thigh before swearing not to take a wife for Isaac from the Canaanites. This particular oath, taken with one hand so close to Abraham’s “family jewels,” reinforces that this is very serious business. The continuation of Abraham’s familial line is at stake. Isaac must have just the right woman for his wife. There can be no mistakes.

The servant of Abraham takes a caravan of ten camels and heads to Abraham’s ancestral lands, to find a wife from Abraham’s people. Marrying your cousin might seem a bit insular, but in the world of the pastoral nomad up through the days of the Bedouin tribes this was common practice. In the desert world, women, especially women who were fertile, were a source of political power based on how many sons they could produce so endogamy (the practice of marrying within one’s family) was common. Women were almost never married outside their clan or tribe.

But that isn’t enough for the servant of Abraham. Whomever he brings back to be Isaac’s bride has to be above and beyond.  As he approaches his destination, he makes a little arrangement with God for a sign. Note that God does not make an arrangement with him. He sets the terms. He is looking for something very specific in a woman. If you remember, he asks:

May it be that when I say to a young woman, ‘Please let down your jar that I may have a drink,’ and she says, ‘Drink, and I’ll water your camels too’—let her be the one you have chosen for your servant Isaac. (Gen. 24:14)

Here is the primary takeaway point: the servant of Abraham is charged with the survival of Abraham’s line. A woman best suited to ensure that survival will be one who respects the rules of hospitality. We’ve mentioned hospitality before, most recently in the context of the very bad things that happen to those who flout its conventions. In my podcast on the Old Testament, we discuss hospitality and its role in the Biblical world in greater detail (“Abraham’s Covenant”) along with how it informs the story of Abraham and Abimelech.

The story of the Patriarchs in Genesis is in many ways a story of survival. It answers the question of why the Patriarchs survived, why they received God’s favor, and how they went on to propagate the nation of Israel. Hospitality stories show up throughout these stories, and it is one of the core justifications that the text gives for who survives, who does not, and why.

Abraham is remembered both in the Bible and in the vast body of tradition that grew up around him for his generosity and his respect for the canons of hospitality. The servant of Abraham is looking for a woman whose sense of hospitality is just as lavish as Abraham’s. 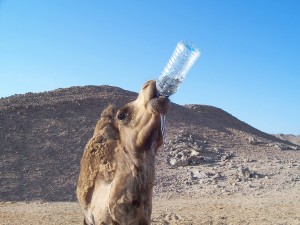 A camel coming in from the desert can drink at least 25 gallons of water.

How lavish? Let’s do the math on this.

The servant of Abraham had hardly finished making his request of God when Rebecca shows up, and she meets his criteria to the letter. She gives him a drink and then starts drawing water for his camels. One camel coming out of the desert will easily consume twenty-five gallons in one extended slurp before stopping. There are ten camels, which means that Rebecca must draw 250 gallons of water based on our back-of-the-envelope calculation.

A water pitcher from this part of Bronze Age Palestine holds between two and three gallons, but let’s call it 2.5 gallons just to make this easy. That comes to about 100 trips to the well, drawing over a ton of water. She did this for a complete stranger, and did so without being asked.

If we look at hospitality as just a cultural artifact from a distant time, one might decide that it’s something that is less germane to our world, where we have farmed out much of the business of hospitality to an entire industry dedicated to providing it. But that would miss the point. The lesson of Rebecca, Abraham, and all the other Patriarchs and Matriarchs of the Old Testament is that survival depends, quite literally, on how we treat the stranger at the gate.

Recent news stories have mentioned some research coming out of Israel to the effect that archaeologists believe that the camel had not been domesticated during the time of Abraham. This isn’t really news; in the scholarly community it’s been known for a long time. That would mean that the story of Rebecca is a later addition by a different editor writing during a time after camels were domesticated. Is it a problem that we have this “impossible” story? No.

As I have stated elsewhere, the Bible does not use its narratives and stories to prove a point, it does so to make a point. That point bears on the character of Rebecca and her importance in the history of the people of Israel. Dismissing the story because it does not match the world of Abraham is to toss away one of the gems of scripture and world literature. The same could be said of the story of the woman taken in adultery (John 7:53 – 8:11), which does not appear in the earliest manuscripts of the John’s Gospel. Someone may wish to discard it on that basis, but it won’t be me. Like the story of Rebecca, it is too consonant, too consistent with the Bible’s message and its understanding of the characters in these stories.

When looking at the Bible through the lens of its cultural background, one must remember that part of that cultural context is how the text teaches the reader.

Dr. Sheldon Greaves holds a Ph.D. in ancient Near Eastern  Studies from the University of California at Berkeley. He is also a Scholar-in-Residence at Christ Church Episcopal in Portola Valley, CA, and adjunct faculty member at Stanford University.