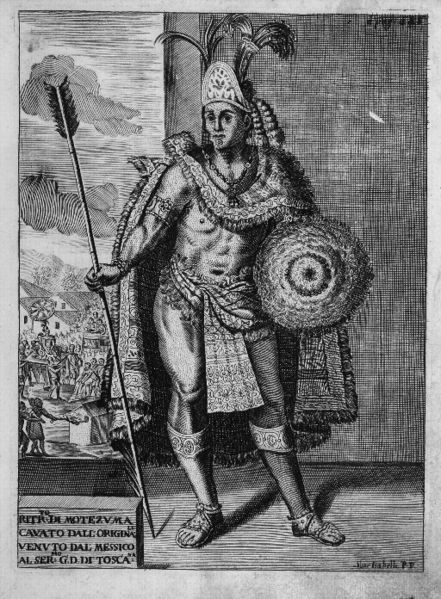 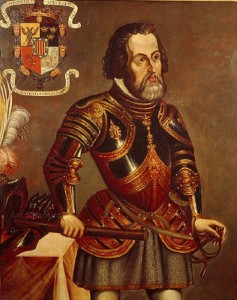 What About the Prophecy of Quetzalcoatl’s Return? As with “white” and “bearded,” the idea that Quetzalcoatl promised to return is an indelible aspect of the modern version of the tale. It is part of what we all know and is typically referenced without documentation. Also similarly to “white” and “bearded,” this well-known aspect of the tale is problematic. When B. H. Nicholson summarized the basic Topiltzin Quetzalcoatl tale he made no reconstruction of a promise to return. I agree with his reconstruction. It is absolutely certain that the original lore contained a section on Quetzalcoatl’s departure, but the corresponding promise to return is absent from all but one native source. That one reference is problematic. Rather, the promise to return is inextricably connected to Spanish accounts. 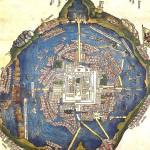 Tenochtitlán Map From The Memory Of Hernan Cortés.

Those accounts begin at the very beginning of the Spanish presence in the New World. When Cortés entered the capital city of the Aztecs, Tenochtitlan,20 he made one of the most remarkable and fateful meetings of cultures in the history of the World. For the first time, a representative of a European nation met the ruler of the largest political domain in the New World. It was not only an encounter of cultures but also an encounter of languages. Cortés spoke no Nahuatl. Motecuhzoma (Anglicized to Montezuma)21 spoke no Spanish. A Spaniard who had been captured by and lived with the Maya, spoke Maya to an native woman, known as Marina,22 apparently a native speaker of Nahuatl who was sold to a Maya village after a family misfortune. Marina translated from Maya into Nahuatl. In this monumental meeting of cultures, communications between the two important figures went through two different translators and three languages.

Cortés indicates no difficulty with communication. In fact, he is very clear about the content of this meeting. In a letter written in 1520 to the king of Spain (published in 1522), he “quotes” Motecuhzoma’s welcoming speech:

Moctezuma II, from the Codex Mendoza

For a long time we have known from the writings of our ancestors that neither I [Motecuhzoma], nor any of those who dwell in this land, are natives of it, but foreigners who came from a very distant land and likewise we know that a chieftain, of whom they were all vassals, brought our people to this region. And he returned to his native land and after many years came again, by which time all those who had remained were married to native women and had built up the villages and raised children. And when he wished to lead them away again they would not go, nor even admit him as their chief; and so he departed. And we have always held that those who descended from him would come and conquer this land and take us as their vassals. So because of the place from which you claim to come, namely from where the sun rises, and the thing you tell us of the great Lord or king who sent you here, we believe and are certain that his is our natural Lord, especially as you say that he has known of us for some time.23 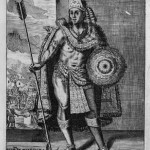 This passage is remarkable—perhaps too remarkable, considering the number of translations Motecuhzoma’s words endured before reaching Cortés and the passage of nearly a year before the speech was recorded. A. R. Pagden, professor of history at the University of California, Los Angeles, comments on its doubtful authenticity: “Both this speech and the one that follows would seem to be apocryphal. Motecuhzoma could never have held the views with which Cortés accredits him. Eulalia Guzmán, a Mexican anthropologist (1890–1985), has pointed out the biblical tone of both these passages and how their phraseology reflects the language of the Siete Partidas [law code of Alfonso X24]. Cortés is casting Motecuhzoma into the role of a 16th Century Spaniard welcoming his ‘natural [divinely appointed] Lord,’ who in this case has been accredited with a vaguely Messianic past.”25 Pagden suggests that a similar tale seems to have been current in the native culture but that it was probably not faithfully reproduced in this record.26

Furthermore, Cortés’s description does not fit the Quetzalcoatl motifs. In Cortés’s report, a foreign leader brings his people to this land. They intermarry; and when he asks them to leave, they refuse. None of these elements matches the Quetzalcoatl lore, although there are points of similarity. However, the result of seeing the Spanish as foreordained to conquer Mexico was so effective that this story of a returning god was spread wherever the Spanish entered new territory. Historian Jacques Lafaye comments: “The prophecy of Quetzalcoatl was a specific Mexican instance of a belief common to the majority of the Indian peoples, the belief that men from the East would come to dominate them. Alvar Núñez Cabeza de Vaca heard of it during his trek across the Southwest; Gómara cites it for Española; the Chibchas, the Tupi of Brazil, the Guaraní of Paraguay, had similar beliefs. In different regions of the New World the Spaniards were taken for ‘Children of the Sun.’”27 Such a widespread pattern indicates either a pan-American myth28 or a Spanish convenience, justifying their arrival and conquests. Although I have not done serious work on the myth of the other native peoples throughout South America, it seems more reasonable to me that the Spanish brought the myth with them, rather than discovering it in virtually the same form all of these diverse locales.

The purpose of Quetzalcoatl’s return as it appears in most sources is a prediction of the Spaniards’ arrival—which is not the same thing as predicting Quetzalcoatl’s return. As the return motif became increasingly Hispanicized, it more strongly justified the conquest—even its excesses. By a.d. 1579–81 when Diego de Durán composed his history, he has Quetzalcoatl instructing his people before his departure:

. . . and delivering to them [of Tula] a large discourse, he prophesied the coming of a strange people from the Eastern parts who would land in this place, with strange clothes of different colors, dressed from head to foot, and with coverings on their heads, and that this punishment was to be sent them from God in payment of the poor treatment which they had given him, and the agony he had suffered. With this great punishment, small and large would perish, not being able to escape from the hands of these his sons; that they were to come to destroy them, even though they were to hide in caves and in the caverns of the earth, and from there they would be taken and there they would go to persecute and kill these people.29

After the conquest, Cortés injects a new element into the native mythic consciousness. The remarkable arrival of strange men from the East was predicted, inevitable, and destined to overthrow the Mesoamerican world order. This Spanish mutation of the myth was so strongly attached to the political motives and historical reality of the conquest that it eventually fed back to the natives themselves, as witnessed by Sahagún’s informants. Nevertheless, the particular forms of the myth that are visible in the literature demonstrate that they are additions made through the influence of the clash of cultures that was the conquest of New Spain.

However, this element of the tale is post-conquest and cannot be reconstructed as an element of the pre-Columbian version of the tale. Therefore, it cannot have any relationship to the Savior’s promise of his second coming.

Summary: there are many more elements of the Quetzalcoatl story that are modified into more Christian forms. They can be reconstructed to show where they had some similarities to the native stories, but in all of them, as in these examples, the native story is quite foreign. What has happened is that some of the early Spanish priests put a more Christian spin on the stories. Unfortunately, when we look at the LDS authors who repeat the Quetzalcoatl stories, it is the Spanish fathers they quote and not the more native records.

Quetzalcoatl might appear to be a remembrance of Christ, but only because LDS authors have put their own spin on the story that the Spanish fathers had already spun into Christian gold from native Aztec straw.

20Modern Mexico City was built on the site of Tenochtitlan. When Cortés arrived, the city occupied an island in a large lake. Bridges provided the only access, sections of which could be removed to improve the city’s defenses. The lake has since been drained and the entire area is occupied by the modern city.

21The name of this important Aztec king is spelled in several ways, attempting to approximate the Nahuatl pronunciation. A rendition that may be closer to the Nahuatl would be Mo-tekw-soma. The unvoiced w (w) creates the transliteration problems.

24Written between 1251 and 1265, the Siete Partidas are the law code of Alfonso X, “el Sabio” (the wise). It is “generally considered the most important law code of the Middle Ages (and largest legislative compilation since Roman times).” Suzanne H. Peterson, “The Legislative Works of Alfonso X, el sabio,” http://faculty.washington.edu/petersen/alfonso/lawtrans.htm (accessed May 2007).

26Ibid., 467. Thomas, Conquest, 406, exercises a similar caution: “Whether the myth of Quetzalcoatl, or Tezcatlipoca, or any other deity, did or did not exercise a decisive influence over Montezuma’s judgments we may never know. But he was exceptionally superstitious, even for a Mexican. He certainly seems, at the very least for a time, to have toyed with the idea of identifying Cortés with a lost lord who vanished into the east. But this identification did not necessarily implicate Quetzalcoatl.”

28This appears to be the position taken in David G. Calderwood, Voices from the Dust: New Insights into Ancient America (Austin, Tex.: Historical Publications, 2005).