Q&A with Scott Hales, creator of ‘The Garden of Enid’ 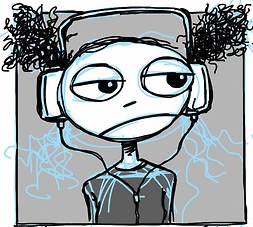 I had the delight of interviewing Scott Hales (click for bio), creator of the webcomic, ‘The Garden of Enid’. In many ways, Scott Hales is a pretty impressive guy. He’s a published scholar, a prolific blogger, but I have also learned that he is a pretty nice guy as well. So nice, in fact, that he agreed to answer a few questions of mine to give us a few insights into his wonderful webcomic, ‘The Garden of Enid.’

Tell us a little bit about Enid. What was her initial inspiration? What about her family?

Enid is deliberately designed to be whoever the reader needs her to be, and I’ve been surprised by the way readers have responded to and interpreted her. I try to say something with the comic, but I try not to be too partisan on any issue. I worry about divisions in the Church and among Church members, and I hope Enid allows Mormons of all stripes to come together to laugh, talk, and recognize and appreciate what binds us together as Latter-day Saints. It’s cheesy, but I sometimes say that The Garden of Enid is my love letter to Mormonism. One of my personal favorites

I started drawing Enid last December after I finished the rough draft of my doctoral dissertation on Mormon novels. I’d been wanting to draw a Mormon webcomic for some time, but nothing I came up with seemed to gain any momentum. After I drew the first comic, the character came to life in my mind. I don’t have much in common with Enid at this stage in my life, so developing her character has been fun and challenging.

For those who aren’t yet familiar with the comic, Enid is a fifteen-year-old Mia Maid who live somewhere in the Midwest. She comes from a single-parent home and relies a great deal on certain members of her ward. Her mother is a member of the church, but she’s had a rocky life and now suffers from a host of challenges, including morbid obesity and depression, which keep her mostly homebound. Enid has also never met her father—although she occasionally speculates about who and where he is. The comic is ultimately about Enid’s relationship with these people, particularly her mother, as well as her relationship with Mormonism. I have noticed that your comics, while  funny, also carry relevant or important messages. Do you have a particular comic with her that means a lot to you?

I think the comic that means the most to me so far has been “Enid vs. Scratchboard Theology.” It was the first comic, I think, to get widely read and shared—but it also articulates how I understand God and the Gospel. I think it was one of the first comics to give The Garden of Enid its serious undertones. I love when Enid converses with historical figures like Joseph Smith. Where did that idea come from? If you could have an hour long lunch with any church history figure, who would it be?

The idea initially came from a webcomic called Coffee with Jesus. In Coffee with Jesus, modern people bring their problems to Jesus and Jesus usually puts them in their place with some wit and humor. I liked the idea, so I drew a comic where Enid has a similar conversation with Joseph Smith. I’ve since branched out into other historical characters, including Brigham Young, B. H. Roberts, and Eliza R. Snow. For me, these comics allow me to address the messiness of Mormon history, which is something I find very interesting. I think a lot of people are surprised (and sometimes hurt) when they learn that Mormon history is as messy as any other history, and I’ve found that a little humor and playfulness is a good way to cope with the messiness. I often wonder how historical church figures would respond to some of the confusion the historical record has left us. For example, so much of what we know about Joseph Smith has been pieced together by ambiguously worded documents and second-, third-, and fourth-hand accounts of his life, works, and personality. How would he set the record straight? What would he clarify if he could? Ultimately, we don’t know—and we can’t know—so it’s best to keep an open mind in matters of Church history, My historical comics, I think, are designed to help Mormons see the past as something far less certain than we usually see it. For this reason, Joseph Smith would be my top choice for an hour-long lunch. I’d like to hear his take on the modern church. My second choice would be the novelist Nephi Anderson of Added Upon fame. He’s underappreciated if not altogether forgotten among Mormons today, which is unfortunate. We owe a lot culturally to Brother Nephi, and he deserves to be known for something other than writing a novel that inspired aspects of Saturday’s Warrior.
What, would you say, is the state of LDS art in 2014? (As in, art produced by Latter Day Saints, about Latter Day Saints, our experience, etc)?

The Mormon art I know best is the literary art, but I’m trying to get to know Mormon comic arts better. I think Mormon literature is in a good place, but I also think it is in the middle of an important transition as writers like Steven Peck become more influential. I’m personally bored with Mormon stories that focus primarily on conflicts between the individual and the institution or the individual and Utah culture—which have dominated literary Mormon fiction since the 1990s—and I’m hoping that Mormon writers will begin to treat the Mormon historical and intellectual traditions as playgrounds for their imaginations. I try to do this a little with The Garden of Enid, but I also see it most prominently in works like Steve Peck’s A Short Stay in Hell and Jack Harrell’s A Sense of Order. The highly imaginative and fun writings of Levi Peterson, I think, paved the way for these works.

I’m also a fan of Mormon literature that seeks to depict the everyday life of everyday, believing Mormons. The fairly recent anthology of short Mormon fiction, Dispensation: Latter-day Fiction, has several excellent examples of this kind of writing. I’m okay with stories that explore doubt in new ways, but I appreciate even more stories that identify other conflicts in Mormon life. Angela Hallstrom’s short story “Thanksgiving,” for example, is an excellent story about a Mormon family dealing with an in-law’s mental illness. Douglas Thayer’s “Wolves,” another story in the collection, deals with torture. If a story introduces me to a new corner of Mormon life or thought, I appreciate it.

In respect to Mormon comic arts, I think the Mormon community has no shortage of talented cartoonists—people who have a lot more talent and skill than I have. What I notice, though, is not too many people are using their cartooning to tell Mormon stories—or, if they are, they take a rather cloaked approach. Exceptions include cartoonists like Jon Clark, Arie Van de Graaf, Henrique Siqueira, and certainly others who draw gag cartoons about Mormon life. I like their cartoons very much, and I envy their ability to boil humor down to a single panel, but I wish we had more cartoonists who extended their Mormon stories beyond the gags. For this reason, I’ve been a big fan of Stephen Carter and Jett Atwood’s iPlates series, which puts a new spin on the Book of Mormon.

I noticed you also have a blog, Artistic Preaching. Could you explain to our readers why you created this blog?

Artistic Preaching is a rechristened version of a Mormon literature blog I have been writing for the last four years or so. It used to be called The Low-Tech World, but I became dissatisfied with that title because it had nothing to do with Mormon literature—or anything Mormon for that matter. The new title is a phrase from an Improvement Era article on Mormon fiction written by Nephi Anderson, the novelist. In the article, Anderson says that a good Mormon story ought to be “artistic preaching”—meaning it should try to instruct readers in an aesthetically pleasing and sophisticated way. This is an old idea in literary theory, but we sometimes roll our eyes at it—particularly in Mormon culture—because Mormon writers have a reputation for being more preachy than artistic. I like the idea, though, and I think some of our best writers—people like Douglas Thayer, Levi Peterson, and even Anderson—have at one time or another found the right balance.

I created the blog as a way to make people aware of Mormon literature—which I think suffers unfairly from a bad reputation. I focus mainly on what might be termed “literary” fiction, although I am open to all kinds of writings by Mormon authors—whether they deal with Mormonism or not. I also use the blog to clarify my own thinking about Mormon literature. I find that I no longer believe everything I once believed about Mormon literature because the blog—and those who comment on it—have allowed my thinking to evolve in productive ways. I also think blogging is a way for me to keep my writing fresh. I try to update it at least once a week, but lately my work on the comic has been my first creative priority.

Find and connect with ‘The Garden of Enid’ on Tumblr, Facebook, and all other forms of social media!