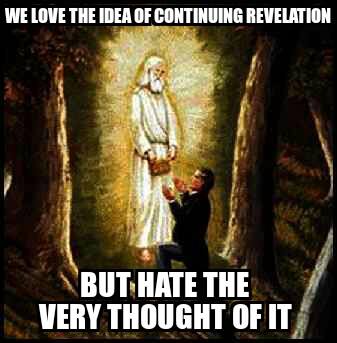 One of the reasons I fell in love with Mormonism is that while investigating the Church I read the word “Ohio” in the D&C. This may seem an odd reason to some but for me it was evidence that this was a Church all about the here and now. Joseph prophesied about current events. He was a Prophet who revealed with frequency and ease. The revelations contained in the Doctrine & Covenants are evidence of God’s love for and attention to his children. So I ask myself, why not a revelation on the ordination of women to the priesthood? Surely amidst all the P.R. maneuvering the Brethren could have walked into the Temple a little early one Thursday morning and asked God if they could please ordain women to the priesthood. Why haven’t they? The most likely reason is that Thomas S. Monson is not a Prophet, seer, or revelator. It has been said, “Ye shall know them by their fruits.” If this is true, my empty harvest basket speaks volumes about what an un-revelator the prophet is. Has the prophet fallen? I walked away from conference feeling this way. I want to desperately feel another way.

I can’t end without a couple thoughts on Elder Oaks’ bizarro talk.

When he said there was a divinely decreed pattern he was lying. Maybe not lying but he was being extremely dishonest and disingenuous. One can make an argument that there is a pattern or a tradition for excluding women from the priesthood within the Church but neither of them are divine.

He was right though about priesthood keys being given to direct, control, and govern. The priesthood IS about power and control. It has little if nothing to do with the charismatic gifts of the Spirit. A Facebook friend summed it up perfectly,

“Priesthood traditionally existed as a means of social control and enforcing mainstream ideology. By acting as an intermediary between human and divine, Priesthood legitimized the power of the dominant by giving the accepted interpretation of divine will. It’s was a construct meant to take something we call “the power of God” and control/organize it. There were the gifts and power of god and then there was the -hood/order of priests (brokers and middlemen) who sought to manage/control it.”

Sigh. What a letdown. It’s the Monday after conference weekend and all I have is a fallen Prophet and regret that I never submitted an Ordain Women profile.

*I should add that I intentionally skipped the “fallen Prophet” vs. “never was” discussion because it was a distraction from my overall message of irritation and angst. I’m happy to engage in any and all discussions about pretty much anything in the comments.