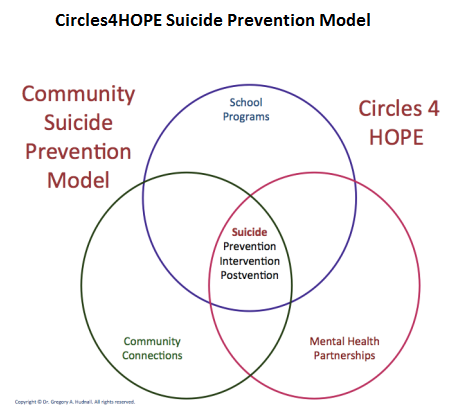 After Dr. Greg Hudnall, a high school principal, helped identify the body of a boy who had died by suicide, he made a promise that he would do all he could the rest of his days to prevent another child from taking his life. This promise resulted in the development of the Utah County HOPE Task Force, a group of professionals, parents, and concerned citizens set on preventing youth suicide. HOPE an acronym for hold on, persuade, empower.

Representatives from various community entities began meeting every month to determine how to best utilize all available resources for suicide prevention, intervention, and postvention. It was a true collaboration; everyone came to the table to determine what role they could play and what services they could best provide.

This talented group, dubbed by Hudnall as the ‘Circle of Influence Community Stakeholders,’ collaborated efforts to help educate teachers, parents, coaches, clergy, and the community to recognize warning signs and to help teenagers help each other. The first HOPE4UTAH conference was held at Brigham Young University in 2000. Representatives from all agencies were working together for the public good, and knew they had a unique chance to address a very serious problem in their community. The model developed by the HOPE Task Force was later found to resemble many of the same steps as listed bythe 1999 U.S. Surgeon General’s Call to Action to Prevent Suicide.

From 1999 to 2005, Provo, a city of 114,000 residents was averaging one to two youth suicides a year. In 2004 the youth suicides prompted the expansion of the Utah County HOPE Task Force’s prevention model to include peer-to-peer intervention through the use of HOPE Squads. HOPE Squads are groups of secondary students who serve as peer mentors and are trained in suicide awareness to assist and help peers who are suffering from depression or may be suicidal in Utah middle and high schools. HOPE Squad participants participate in meetings and trainings, help distribute risk and suicide prevalence information at school and community events, and refer students who are struggling with mental health concerns to school professionals. The goal of peer intervention is to break the ‘code of silence,’ as research shows that 80% of at-risk students give warning signs or tell a peer, but rarely confide in an adult. From 2005 to 2013 Provo City School District, the ninth largest district in the state of Utah with 15,000 students has not lost one student to suicide.

Over the past 15 years, members of the HOPE Task Force and HOPE4UTAH have trained over 20,000 Utahans in suicide prevention, increased capacity to over 1,700 volunteers, implemented over 33 HOPE Squads in Utah middle and high schools, and referred over 87 students for help. Since 2006, there have been zero youth suicides in the school district in which the program was first implemented. HOPE4UTAH is committed to its mission: To reduce the number of youth suicides in the state of Utah by providing a suicide model that provides education, training, and expertise in suicide prevention, intervention, and postvention.

Another community, Syracuse, north of Provo lost seventeen people in 2012 to suicide. Community leaders enlisted help from the local task force, NUHOPE (Northern Utah HOPE Task Force) that was trained by the originators of HOPE4UTAH. The community leaders rallied education, law enforcement, city and health leaders, even students, to collaborate on how to address the suicide concerns. Due to the community’s efforts, Syracuse has dropped from seventeen to one death from suicide. One is too many, but the success from 17 to 1 shows the power of a community coming together.

The community suicide prevention model HOPE4UTAH created is called the Circles4HOPE. The Circles4HOPE model was developed from a partnership with public and private agencies, including linkage to public and private health care systems collaborating together in Provo Utah. Suicide prevention was the core priority. The model is designed for collaboration among community organizations, mental health agencies and schools. This comprehensive, holistic approach to community suicide prevention, intervention, and postvention is essential to effectively combat suicide.

1. Common Language: Warning signs, who is at risk…

2. Common Understanding: How to intervene…

3. Common Knowledge: Where to go for help… 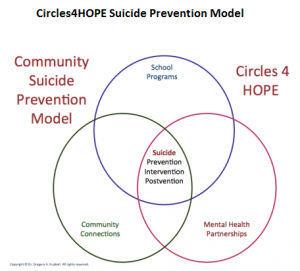 If you would like to listen to Dr. Natasha Helfer-Parker’s interview of Dr. Hudnall on the Mormon Mental Health podcast, click here.

Dr. Gregory A. Hudnall is a former high school principal, student service director and associate superintendent with the Provo City School District (ninth largest district in Utah with 14,000 students). Greg has been involved with suicide prevention for the past twenty years and personally involved with over twenty-five suicides as a first responder or consultant. He was invited to testify before the United States Surgeon General on suicide in Utah. He has also been invited to testify before the Utah legislature numerous times. He has trained over 20,000 people in Utah, including students, educators, mental health workers, judges, church leaders and law enforcement officers. He is considered one of the Utah’s leading experts in school based suicide prevention, intervention and postvention. His program, “HOPE Squads” has been responsible for saving over seventy-five student lives. Greg travels the globe working with educators, parents and students including recent trips to Egypt and Saudi Arabia. Greg is the currently the executive director of “Hope4Utah” a non-profit organization dedicated to suicide prevention, intervention and postvention

All posts by Greg Hudnall