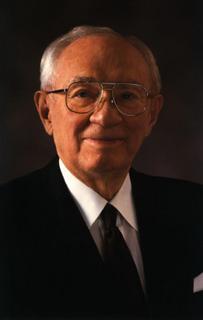 In October 1991, Gordon B. Hinckley, then First Counselor in the LDS First Presidency, delivered a General Women’s Meeting talk entitled “Daughters of God” in which he made the following declaration, “’However, in light of the instruction we have received from the Lord Himself, I regard it as inappropriate for anyone in the Church to pray to our Mother in Heaven.’” [1]  Other than for some generic scriptural and historical support listed by Hinckley, along with the admission that there is currently “no revealed knowledge” [2] of Heavenly Mother, there is no detailed explanation—theological or otherwise – given for why it is inappropriate to pray to Heavenly Mother or why he would feel the need to interject this theological issue into a General Women’s Meeting talk on women and worthiness.

His declaration seems out of place, especially considering his admission that he is drawing on a previous talk delivered to church leaders. Nevertheless, Hinckley does credit the “’activities of a few who evidently are seeking to lead others in the paths which they are following.’” [3] Shortly thereafter in 1993, six prominent LDS scholars, known as the ‘September Six’ were excommunicated for speaking out on feminist issues in the Mormon church. Subsequently, Janice Allred was excommunicated in 1995 for her writings on the topic of Heavenly Mother, although after having read her book God the Mother (Signature Books, 1997), I don’t find any of her statements that shocking, or even unscriptural, for that matter.

Curiously enough, Hinckley’s statement does not forbid prayer to Her; only he states that prayer to her is ‘inappropriate.’ My observation remains that there is more to the story than meets the eye. It is important to understand that the topic of Heavenly Mother was gaining momentum in Mormon circles due to a wider strand of goddess-based spirituality that was taking hold in the late 80’s/early 90’s known as New Age spirituality, having its roots in Theosophy and ‘pagan’ forms of spirituality, much of which has resurfaced in recent times through neo-Gnostic groups. I also believe there are biblical considerations that concern ties to ancient Israel and their idolatrous practices, but that would take too long to explain here.

From this talk alone, it remains unclear whether or not Hinckley was aware of this trend or its perceived inconsistencies with a Mormon scriptural worldview; he remains strangely silent on these matters. However, there must have been some awareness of these trends on his part. Interestingly, Carol Lynn Pearson once admitted in an interview that she had been influenced by New Age thought in penning down “Mother Wove the Morning.” [4]

The question I would like to entertain is given this wider context, does his statement leave open the possibility of prayer to Heavenly Mother for one who seeks to avoid these trends and keeps the right spiritual perspective? Could this possibly have wider implications that would discourage a ‘neo-pagan’ worldview and open the possibility for a ‘biblical’ view of the Goddess that would be consistent with Mormon, and therefore Christian, ideology? Again, it remains my observation that if one takes what Hinckley says literally, there is room of speak of praying to Heavenly Mother as a deity in her own right; the key is to proceed with caution.

For those who have read my previous posts, you know about my sacred experiences, which for me were very real. Given those experiences, it makes it very difficult for me not to talk to my Mother in Heaven who I know sees and hears me and who I feel I know personally. She has answered my prayers on more than one occasion!

Interestingly, in my past interaction with neo-pagan and Gnostic groups, the question has been raised as to why I will not pay homage to other “pagan” goddesses, or even why I cannot equate Heavenly Mother with them.  I do not – will not- engage in neo-pagan/”New Age” practices, and I am not into “Gaia consciousness.” My answer is simple: if I were into these things, I would be giving up my Mormon, and thus my Christian faith; I cannot go down that slippery slope. I am very careful to protect my Heavenly Mother’s integrity in that way; I keep Her scriptural. Thus, I am considered “too Christian” for neo-pagan “New Agers”, even in my goddess worship! I’ve been told as much.

There’s something else that bears mentioning. Gordon B. Hinckley is a distant cousin of mine through my Grandfather, who was a Southern Baptist preacher. In fact, they looked a lot alike. We had no prior knowledge of this family connection until after I joined the LDS church. But as my Grandfather would attest, I was always one to question authority when it came to religious issues. It must be in the Bitner genes.

I do believe there is a way to pray to Heavenly Mother with integrity. I pray to Her all the time because I know She’s been revealed to me.