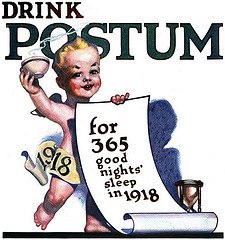 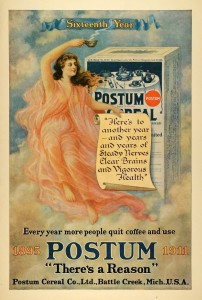 HISTORY OF ORIGINAL POSTUM:
Postum was developed by C.W. Post in the 1890s as a result of a stay he had in a sanitarium owned by Kellogg. An instant cereal beverage was served there as a healthy drink for its patients. C.W. Post knew a good thing when it saw it. When he was deemed healthy enough to be discharged, he set out to develop the grain beverage he was served himself. C.W. worked in a 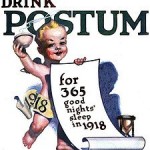 small barn in Battle Creek Michigan and was able to reproduce the beverage which he named POSTUM and introduced it to the public as a healthful cereal drink to replace the demons of coffee.

Coffee at that time was well known for its addictive qualities and its frequent problems with irritating the stomach and digestive tract and problems with reflux. C.W was also a spiritual person who saw coffee as enslaving to its drinkers. C. W. often used the healthy theme in his advertising. Post used the concept of Mr. Nerves was the coffee drinker and the Postum drinker was calm, cool and collective. All of the Posters used in advertising demonized coffee because of its harmful effects and Postum was the smart choice because it would “Make Dreams Come True” by causing “clear thinking”. Post further stated 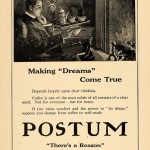 that “Coffee is one of the most subtle of all enemies of a clear mind. If you value comfort and the power to do things, suppose you change from coffee to well-made POSTUM.”

Postum was Post Cereal’s first product. After experiencing considerable success with Postum, C.W. developed Grape Nuts out of the spent grain from Postum and another cereal called Elija’s Manna that later became known as Corn Flakes.

MORMONISM’S BROAD ACCEPTANCE AND LOVE OF POSTUM:
The Word of Wisdom was established in the LDS faith about 200 hundred years ago. The Word of Wisdom is a health code that Mormons are commanded to live by and is attributed to the longevity of LDS members who follow it. One of the components of The Word of Wisdom is that it discourages the use of hot drinks which were interpreted as coffee and tea at that time. The Latter-day Saints stopped drinking coffee and as a result of this commandment. Postum became a beverage of choice for many members of the Church of Jesus Christ of Latter-day Saints. Postum quickly became a mainstay in many LDS homes.
C.W. Post who was affiliated Seventh-Day Adventists also have health codes as a part of their spiritual beliefs. Postum is found in many Seventh Day Adventist households.

THE DEATH OF POSTUM:
Kraft never informed the public that Postum would no longer be available. People found out the same way we did. One evening I traveled to several grocery stores looking for it and found two jars of the coffee flavored Postum. I quickly purchased both jars but knew it would not be enough to last the entire winter. I asked my husband to look it up on line and order some. He called me at work in a slight panic and said Kraft discontinued Postum. “Discontinued Postum! Are you sure?” We searched the internet and found jars being auctioned off on Ebay for $100 or more! My husband and I found this a little crazy so we attempted to make it ourselves. As a result of six months of trail and error and our house, hair and cloths smelling like burned wheat and molasses, we did additional research and began making it more successfully in my kitchen. My husband was the guinea pig. I would make a batch that took two to four hours and asked him to compare flavor. It took a couple of months but I was able to make it taste the same as original Postum. The only problem was making it instant. We did not know the liquid had to be dried to make it instant. After talking to my scientific relatives, we were referred to a professor in a food science department in South Dakota. They referred us to a plant in the mid-west and eventually were introduced to Tom Luallen a food Scientist affectionately known in the food business as the Starch King and his company STARQUEST FOODS. Tom eventually became our business partner. We conducted some pilot trials in another food science department in the mid west and eventually found a company who was interested in manufacturing Postum for us. The only problem was we did not own the Trademark but accidentally found a company that owned the trademark and trade secret. They sold them to us and Tom, and after that the rest is history.

WHERE CAN WE GET POSTUM? 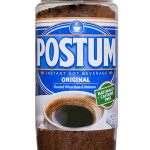 Dayle and June have been married for 19 years and have three children. We are members of the Church of Jesus Christ of Latter-day Saints. We live in Charlotte, North Carolina. June is a school teacher of 20 years and teaches literacy to emergent readers who struggle. Dayle is a School Psychologist of 25 years who evaluates students with special needs. They formed Eliza's Quest Foods, LLC and have a business partner, Thomas Luallen who is a food scientist. Tom's expertise has been significant in re-introducing Postum to consumers.

All posts by Dayle and June Rust