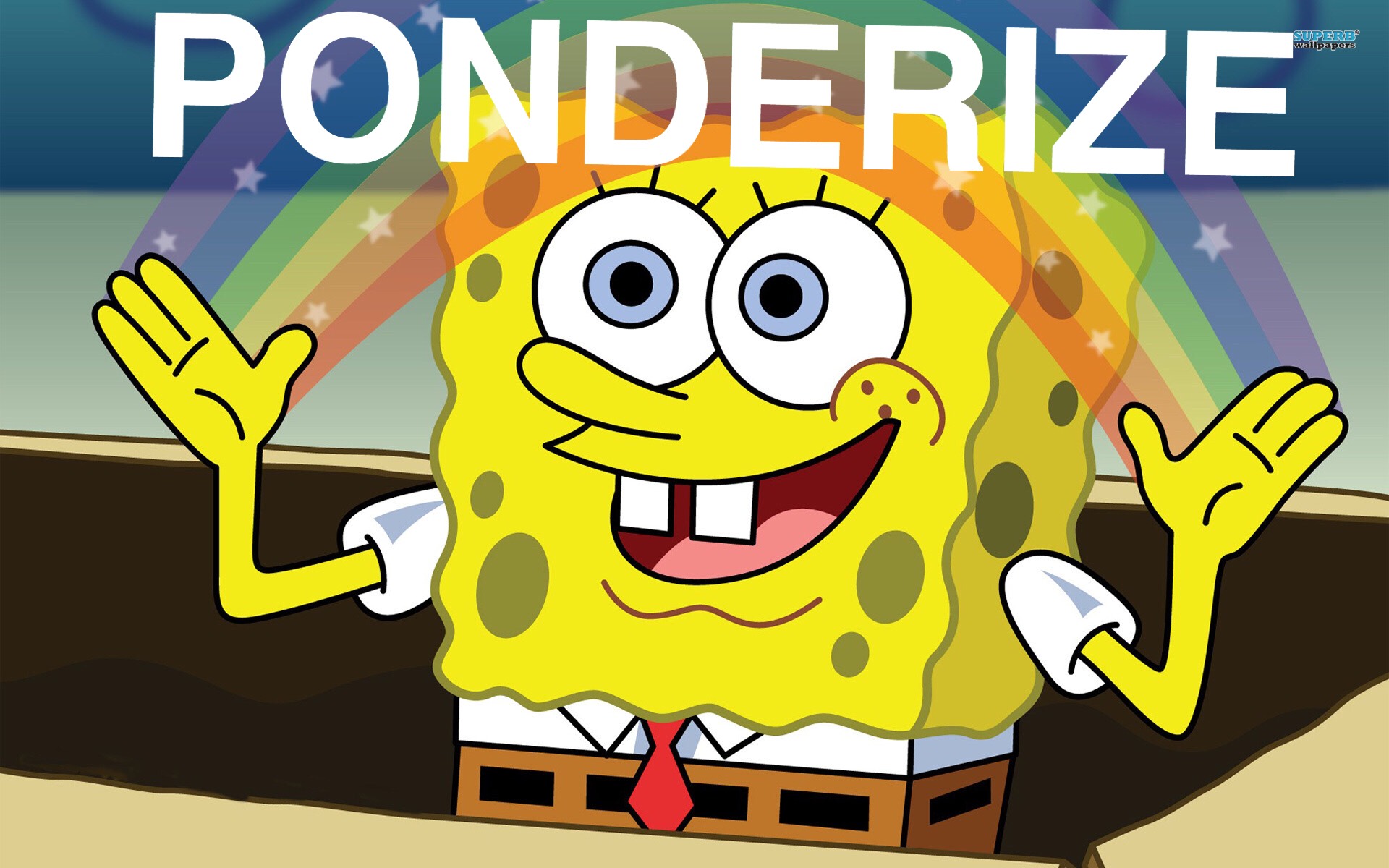 Then Jesus entered the temple and drove out all who were selling and buying in the temple, and he overturned the tables of the money changers and the seats of those who sold doves.  He said to them, “It is written:

What was the sin that the Gospel writer was pointing out through this act of Jesus? Some historical context will help:

“According to Exodus 30:11-16, every adult male Israelite was to pay half a shekel annually to the sanctuary.  In the period of the Second Temple this tax was paid at Passover; to assist pilgrims to Jerusalem, money changers apparently functioned within the large open area known as the ‘Court of the Gentiles’ or in the porticoes that framed the Temple closure, converting to the proper payment different currencies or those that were religiously offensive because of portraits on coins…rabbinic sources provide some evidence for complaints about profiteering by money changers, who charged as much as eight percent for their service.”1

According to another source:

The sin was that the money changers were profiting on people’s spiritual experiences.  Were the money changers fulfilling a needed and good role?  Yes.  Offering help to pilgrims and offering animal sacrifices to Yaweh were good things.

Brother Devin G. Durrant of the Sunday School General Presidency, during the October 4, 2015 Sunday afternoon session of General Conference, introduced the world of Mormonism to a neologism:

“The word ‘ponderize’ is not found in the dictionary, but it has found a place in my heart…So what does it mean to ponderize? I like to say it’s a combination of 80 percent extended pondering and 20 percent memorization.”

And I thought George W. Bush was the only authorized American neologist.

Now, this is just funny.  No harm no foul. But wait.  Just wait. A ponderize website has already shown up – I’m not sure when. I assume after Brother Durrant gave his talk.  According to the about page of ponderize.us:*

“My husband and I, Ryan Durrant, are the son and daughter-in-law of Brother Durrant who spoke about Ponderizing in General Conference. We are trying to spread the word to Ponderize with these T-Shirts and bracelets. All of the profits will be going to the missionary fund, we won’t make a penny off this and we hope it will help you remember to ponderize.”

Okay, profits will go to the missionary fund.  Sounds good. But wait, weren’t the money changers at the Temple also providing a righteous service? What’s the problem?  The problem is using spiritual capital to manipulate people to spend money. That’s the rub brothers and sisters. 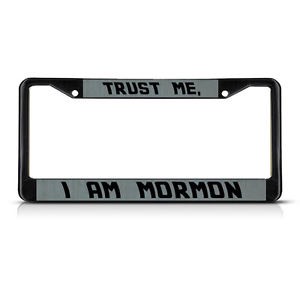 Wait.  I lied.  There is a bigger problem.  Someone is now cutting into Deseret Books’ territory of making money from General Conference quotes. That’s where the true sin lies.

*As of 9:30 pm PST, the ponderize.us website has been taken down.  Is this temporary? Do we smell conspiracy? Is this the work of the Deseret Book cronies?  Or is it that the owners of the website realized what a horrible idea this was?

I had read rumors that pondrize.us (as well as ponderize.org) had been created in September of this year.  I also had read that prices had been lowered, and that offering the profits to the missionary fund occurred only after pushback had been received from active Mormons. I researched these allegations and had collected several screen shots to share here with you all.  And then…Brother Durrant issued an apology.  The apology was on the ponderize weekly face book page, but it appears the page has now been taken down.  KUTV did publish a screen shot of the apology from Brother Durrant and that is from where I obtained the screen shot below.  In his apology, Brother Durrant explained everything and left nothing to speculation.  It is hard to admit when one has erred, so I must applaud him.  Just in case the screen shot is too difficult to read, here is what the apology says:

“A week before my address, my son obtained the ponderize.us domain name and subsequently created a website to offer t-shirts and wrist bands to highlight and extend the ponderize message, which we have long talked about in our family. Although we didn’t invent the term, as far as we know our use of it is unique. Because of the backlash he received in associating a commercial venture with a General Conference talk, he initially lowered his prices to cover his costs and then decided to keep prices as originally set and to donate the profits to the missionary fund of the Church. Ultimately, he decided to take down the website last night. The site will remain down. I was aware that my son was creating a website related to the topic of my talk. I should have stopped the process. I did not. That was poor judgment on my part. Of course, none of the Church leaders were aware of the site. I offer a sincere apology to any person who was offended in any way by the site.” 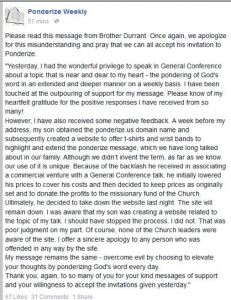 These screenshots were not part of the original post.  They were added on Monday, September 5, 2015 at 7:00 pm PST.  It was felt that they should be archived here in case the other online sources where they are also found are later deleted.  My friend Gwen Hutchings did the sleuthing for me.  So much thanks to her:

These images can be found at  imgur.com.  They show the price changes that Brother Durrant mentions in his apology: 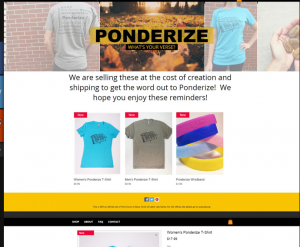 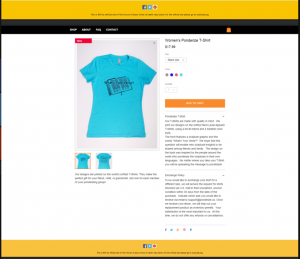 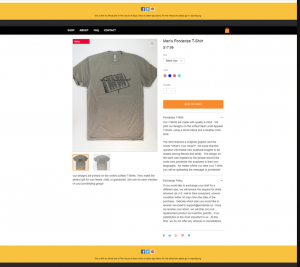 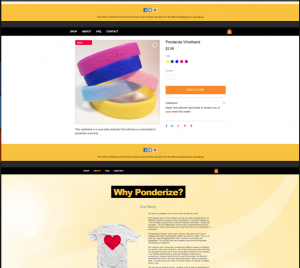 The following can be found here.  It shows that Brother Durrant’s son also purchased the domain name ponderize.org back in September: 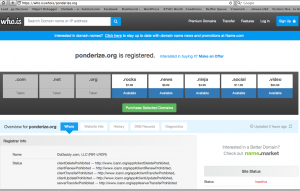 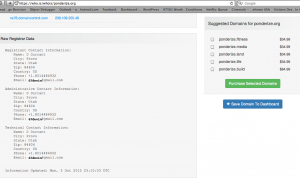 The following is a screen shot forwarded to me by Gwen,which shows when the domain name, ponderize.us, was purchased.  It was also purchased in September.  I don’t have a website link on which to click. 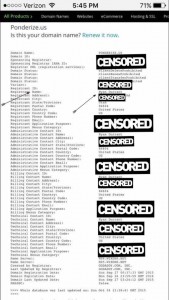 1 The Oxford Companion to the Bible, Money Changers, pg. 524 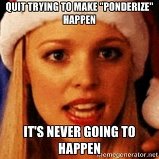 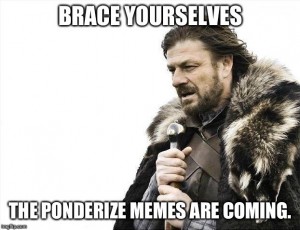