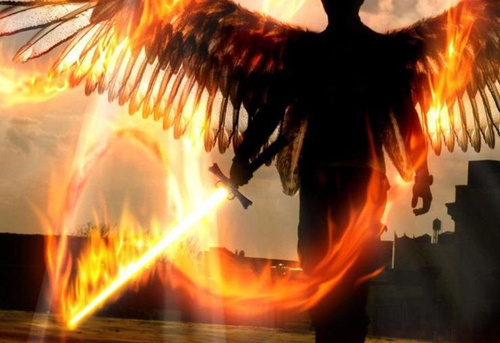 Really? God sent an angel with a sword to Joseph Smith to tell him about polygamy(1)? Is that what we are going with? Are we all ok with that? If God is in the business of sending angels down, wouldn’t it be nice if he sent Joseph a message that was more useful than say the terrible practice of polygamy? I know, I know, “God works in mysterious ways”, but I can’t help myself of thinking of some useful things that could have been revealed in this moment.

If I was in the business of sending messages to humans via angels with a sword this would have been my wish list of realistic messages:

1. Wash your hands after using the bathroom.
2. Wash your hands before preparing food.
3. Anyone in the medical field should wash their hands and sterilize instruments before performing any actions.
4. Floss.
5. Boil water before drinking it.
6. Do not cough into your hand, rather cough in your elbow.
7.  When preparing chicken, wash off area where chicken was prepared with hot water and soap.
8.  People of any color besides white are not cursed – AT ALL, they are to be seen and treated as equals.
9. Slavery is evil.
10. Women should be seen and treated as equals. (this one might be a tough one for the time period, but maybe move out to the rocky mountains to practice this one).
11.  Garments are to be worn only in the temple.
12. Polygamy should not be practiced, for it will cause your death, the death of your brother and the persecution of your followers.
13. One should never marry any person under the age of 18.
14. Take care of the poor before worrying about missionary work, who is or isn’t baptized, sins, who committed sins or who is “worthy”.
15. Again with the cursing, there is no such thing, there is no color curse at all.
16. Apostles shouldn’t be called for life to avoid major health issues.
17. You should really start thinking about a system of who the next prophet should be before you get killed.
18. That thing about Missouri being the new Zion… maybe we should pick a place that has better temperate weather, maybe Orange County?
19. Eat lots of vegetables.
20. Don’t buy Egyptian scrolls from traveling salesman.
21. Be excellent to each other, and party on dudes! (2)

If you have more messages to send via angel with flaming sword please put them in the comment section. Try to keep them time period related.