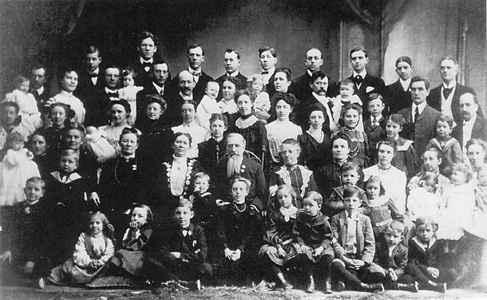 As part of the new policy changes affecting gay LDS church members a restriction was put in place which denies children of parents in a same sex relationships access to naming and blessing ceremonies, baptism, and priesthood ordinances.

A portion of the updated policy reads as follows:

“A mission president or a stake president may request approval from the Office of the First Presidency to baptize and confirm, ordain, or recommend missionary service for a child of a parent who has lived or is living in a same-gender relationship when he is satisfied by personal interviews that both of the following requirements are met:

The policy does not specify a child’s living conditions as affecting their eligibility for baptism. Having a parent in a same gender relationship, no matter the status of contact with their children, is apparently enough to trigger this new policy. Theoretically, it is possible for children who have no contact with their parent in a same sex relationship having this restriction enforced since living conditions are not addressed.

One of the common arguments in support of this policy points out that the church has had similar long standing rules for families who have been involved in polygamy in the past. As both polygamy and same sex marriage involve familial relationships classified as sinful by the church many assume they should have similar restrictions on membership.

However, once the church’s long and complicated history with polygamy is taken into consideration it becomes easier to understand why those restrictions were originally put in place and the comparison to same sex marriage falls apart.

Polygamy has been part of the church since shortly after it’s restoration. According to LDS.org, “The revelation on plural marriage was not written down until 1843, but its early verses suggest that part of it emerged from Joseph Smith’s study of the Old Testament in 1831….By June 1844, when Joseph died, approximately 29 men and 50 women had entered into plural marriage, in addition to Joseph and his wives. When the Saints entered the Salt Lake Valley in 1847, at least 196 men and 521 women had entered into plural marriages.” (http://bit.ly/1wkQDum)

Plural marriage continued to be a vital part of the LDS church after it moved to Utah. “Probably half of those living in Utah Territory in 1857 experienced life in a polygamous family as a husband, wife, or child at some time during their lives.” (http://bit.ly/11hsB9d)

The thing was, people outside the church found the practice of polygamy distasteful. Plural marriage played a significant role in the church’s persecution in Nauvoo and Utah. Outside pressure continued to mount and culminated in the Edmonds-Tucker act which made the practice of polygamy illegal prompting the arrest and imprisonment of prominent church members as well as the seizure of church assets.

It was under this backdrop that President Wilford Woodruff announced the first Manifesto in 1890. Many LDS church members believe that this first Manifesto was the end of polygamy in the church. The reality of what happened is not that simple.

For many in the church this first Manifesto was perceived to have happened with a wink and a nod. The performance of new plural marriages was not stopped but instead was moved out of the public eye and back into the shadows. 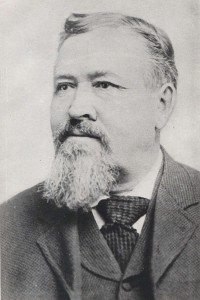 My great great great grandfather, Marriner Wood Merrill, was an apostle and the president of the Logan, Utah Temple at the time the first Manifesto. He was under the impression that the Manifesto was not what most LDS members today believe it to be.

“I do Not believe the Manifesto was a revelation from God but was formulated by Prest. Woodruff and endorsed by His Councilors and the Twelve Apostles for expediency to meet the present situation of affairs in the Nation or those against the Church.” Marriner Wood Merrill Diaries, 20 Aug. 1891

Merrill continued perform plural marriages over the coming years as an apostle and president of the Logan Temple. Apostle Matthias F. Cowley married Harriet Bennion in 1899 as a polygamist wife. When quorum members asked who performed the ceremony, Cowley responded: “Brother Merrill put me under a solemn covenant binding me not to tell; I was married in the Logan Temple, so leave you to guess the rest.” (Clawson diaries, 11 & 12 July, 1899)

In 1904 following the publicity surrounding the Reed Smoot hearings and President Joseph F. Smith’s testimony before the senate President Smith put forth what is known as the Second Manifesto, which laid out penalties, including excommunication, in the event that additional plural marriages were performed. “Contrary to direction, two Apostles, John W. Taylor and Matthias F. Cowley, continued to perform and encourage new plural marriages after the Second Manifesto. They were eventually dropped from the quorum. Taylor was later excommunicated from the Church after he insisted on his right to continue to perform plural marriages.” (http://bit.ly/11e17S7)

At this point the church had (finally) successfully outlawed additional plural marriages in the church. However plural marriage was, and is to this day, canonized in LDS scripture in both the Doctrine and Covenants and The Book of Mormon. It is still practiced in the sense that men are permitted to be sealed to additional wives in the case of death or divorce while women can only ever be sealed to one husband.

The similarities in doctrine and the church’s history with polygamy have made LDS church members targets of recruitment efforts by polygamist sects over the years. The church put safe guards in place prevent the ranks from being infiltrated by those teaching polygamy.

Children of parents who have practiced or are practicing plural marriage contrary to the law must receive approval from the First Presidency before they may be baptized and confirmed. The mission president may request may request this approval from the Office of the First Presidency when he is satisfied that all three of the following requirements are met.

(1) The children accept the teachings and doctrines of the Church.

(2) The children repudiate the teachings upon which their parents based their practice of plural marriage.

Surprisingly, the new requirements for a child of a same sex parent are more restrictive than those for children in polygamist families. Baptism is only restricted for children whose parents are practicing polygamy “contrary to the law”. Presumably, children living in countries where polygamy is permitted can be bypass these restrictions. (This was an update to the 2006 manual which placed the restrictions whether or not polygamy was legal) (Church Handbook of Instructions, 2006 pg 34, http://bit.ly/1M1VWXC)

Also notice that polygamist children can be baptized as minors as long as they are not living in a polygamous household while children of a parent in a same gender relationship must wait until they are 18 to apply for permission from the First Presidency.

In the case of polygamy the restrictions on membership are understandable, some may even say prudent, considering the church’s complicated polygamist past and the continued efforts by polygamist sects to recruit within the church. A policy was needed to make it clear that they no longer support the practice of polygamy. They needed to do their best to ensure that members would not be led back to that practice that remains a part of their scriptural canon.

Same sex relationships also have a long history within the LDS church. However the similarities between the two end there. When we consider the times same gender relations have appeared in Mormon history – from the John C. Bennett scandal in Nauvoo, electroshock therapy at BYU, California’s Proposition 8, to this most recent policy change – the church’s stance on same gender attraction has changed very little over time.

It seems that few, if any, people are unclear on the church’s position as to same sex relationships and marriage. There is no need to clarify this position. We know.

And gay people, unlike polygamists, are not recruited — they are born. The church’s web domain MormonsandGays.org confirms that the church’s stance is that same sex attraction is not a choice one makes. There is no risk of a homosexual joining the church and “recruiting” faithful church members as homosexuals. It’s not a choice. Period.

Implementing more severe restrictions on children of same gender parents does not.

Jacob is a fifth generation Mormon who grew up in Rexburg, Idaho. He works in Minnesota as a Certified Registered Nurse Anesthetist. His ridiculously unrealistic pipe dream is to make enough money off things he creates on his 3d printer to quit his full time job and retire in style.

All posts by Jacob Ricks