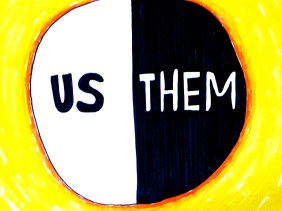 Despite warnings from other leaders that emotional sentimentalism “should never be leaned upon as a substitute for spirituality,” 1 Elder Holland used up a good couple of minutes of his April 2014 General Conference address to describe in detail how two sister missionaries had food spit and thrown at them in the routine course of their missionary efforts. Intentional or not, it’s placement at the beginning of the talk set a rather defensive tone for the entire discourse.

Perhaps there’s nothing wrong with pulling our heartstrings a little to rally the troops. But I’m hesitant to interpret my natural emotional response as spiritually instructive. Howard W. Hunter’s warning comes to mind:

“I think if we are not careful … we may begin to try to counterfeit the true influence of the Spirit of the Lord by unworthy and manipulative means. I get concerned when it appears that strong emotion or free-flowing tears are equated with the presence of the Spirit.2

We’re masters at refashioning emotional moments to build testimony. We dress up our kids in pioneer clothes and send them off on mini-treks so they can experience firsthand the sacrifice of being forced across the plains. Forget that most Mormon pioneers actually sang and danced their way to Zion in the summer sun, and rode unscathed in covered wagons. Heber Kimball managed to haul a piano all the way to Laramie. But instead, we epitomize the less than 10% that pulled handcarts and suffered from overzealousness and poor preparation. One Salt Lake Tribune reporter rode along with a mini-trek family in 2008, and recounted that around their last campfire, their “pa” told the kids:

“I know the spirit has been with you this week. The emotions – that’s not your mind playing tricks on you. That’s the spirit of God touching your hearts.”3

When we’re burning Nauvoo temple replicas, burying baby dolls, and having those children attacked by fake mobs while they sleep, it’s hard to make a case against playing with emotions. Not only is it historically inaccurate (handcart pioneers never saw the temple burning and never faced any mobs), it is simply embarrassing. 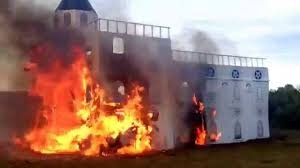 Of course, mocked up trauma bonding may be a valuable team building experience, but the manufacturing of actual persecution for the sake of solidarity isn’t much of a stretch. Take polygamy, for example. In the Gospel Topics essay at lds.org, we’re told:

“Plural marriage also helped create and strengthen a sense of cohesion and group identification among Latter-day Saints. Church members came to see themselves as a “peculiar people,” covenant-bound to carry out the commands of God despite outside opposition, willing to endure ostracism for their principles.”

To what extent was this the main purpose all along: to build loyalty and commitment by virtue of coming under attack? Laurence Moore of the American Historical Review says:

“It clearly identif[ied] individuals as members of a distinct religious community; leaving the group and blending into the world become psychologically and socially difficult…When a group practice also draws persecution from the world, group solidarity increases.”4

Mary Jane Tanner, an early plural wife, told a family member in 1882 “Aunt Cornelia says why do I defend polygamy so strongly I tell her because she attacks it.” Not a whole lot of cognitive processing going on there – she defended the Principle because it was attacked, pure and simple. Armand Mauss explains this predictable reaction to criticism:

“…the more they sacrifice, the more dependent they will become upon the rewards offered by their religion. The more ‘costly’ such products, in terms of member sacrifice, investment, and stigmatization, the more ‘valuable’ they become.” 5

The stigma doesn’t have to come from the outside, either. Steven Taysom interprets the fiery rhetoric of the Mormon Reformation of the late 1850s as more than just a call for unquestioned obedience:

“The Mormon Reformation should not be interpreted primarily as a response to an organic spiritual crisis. Rather, it was the intentional creation of a crisis by church leaders in an attempt to reinvigorate Mormon communal and religious identity at a time when the Mormons were between periods of major crisis with the outside world. … The Mormon Reformation stands as a synthetic crisis implemented by LDS leaders to reinvigorate reliance on LDS church leaders among rank-and-file Mormons at a time when external crises were absent…The catechism was an important tool of surveillance that served to inflict guilt and induce confession — a cathartic act that bound the individual Mormons to their leaders.” 6

So are we manufacturing emotional crises to induce obedience and loyalty today? Here are a few thoughts.

I’ve pointed out before that our over-emphasis on sexual purity has the opposite effect on our youth (See my post at Doves and Serpents here, and some actual stats here.). If the church doesn’t talk about troubling history because it’s not uplifting, or because they don’t want people to go looking for it, why can’t we take the same approach to pornography? It’s well-known in behavioral psychology that micromanaged suppression often leads to full blown obsession. It seems we purposely create an impossibly strict sexual culture so that an all-consuming adolescent struggle becomes the source of a more committed membership. Stigmatizing natural tendencies leads to guilt, which leads to confession and ultimately dependence. As one blogger opines, it’s not about the sin itself; “it’s about having a boogie man to rally against.”

The Public Fight Against Gay Marriage

The church’s calculated steps in to the public spotlight from time to time over gay marriage has mostly served to reinforce an exceedingly overused us-versus-them worldview. And as long as we keep talking about it, bickering about it, and getting flack for it, the investment in attorney fees and public affairs officials who argue over a definition will be justified. Our fight against gay marriage, then, is our modern-day Mormon Reformation, “an attempt to reinvigorate Mormon communal and religious identity at a time when the Mormons [are] between periods of major crisis with the outside world.” The strategy is not without collateral damage, unfortunately.

“Faced with assimilation, Mormons have felt the need since the sixties to reach ever more deeply into their bag of cultural peculiarities to find either symbolic or actual traits that will help them mark their subcultural boundaries and thus their very identity as a special people.”  7

And even before the sixties, we find examples of “peculiarizing” ourselves proudly. B.H. Roberts wrote of plural marriage:

“…[I] see nothing amiss in referring to it as possessed of a certain publicity value to the whole work of God.  And I know of no single thing in the New Dispensation that has done so much to keep that dispensation and its major message before the world as this same principle of plural marriage and the practice of it by the church.” 8

When the flame of plural marriage was finally blown out in the early 1900s, a calculated effort ensued to replace the Mormon’s newly-jeopardized identity. Almost as if blowing old embers to provide the necessary spark of persecution, they turned to then little-known stories in early church history. Kathleen Flake comments on the pivotal moment: “New emphasis on the First Vision maintained a sense of religious difference and, as such, provided the equally necessary sense of internal cohesiveness and historical continuity in terms of persecution.” 9

The constant reminders of the “attack” on the family and the perils of “the world” remind me of M. Night Shyamalan’s The Village.

In what is supposed to be 1897 in a completely isolated Pennsylvania village, the adults occasionally dress up as monsters and stalk through the town while everyone, especially the youngsters, hide in fear. The attacks serve to remind the young villagers how dangerous it would be to ever leave the comfort and safety of the community and venture into the woods.

In the end, it’s revealed that the village was actually founded in the 1970s as a refuge for a group of grief-stricken parents fed up with the harmful realities of the modern world. They purchased land and created a new life though their kids know nothing of the conspiracy; the only mechanism keeping them from knowing the truth is fear of what might exist in the woods, reinforced by the frightening visits from “those we don’t speak of.”  The community couldn’t be sustained without the occasional crisis of fear, though entirely fabricated.

And so I ask, can a committed LDS membership be sustained without the natural tribalism forced by a modern crisis? Or perhaps a more relevant question, if the increasing tolerance of the modern world results in nobody even caring what the Mormon Church did or said, would there be any wind left in our sails to induce commitment?