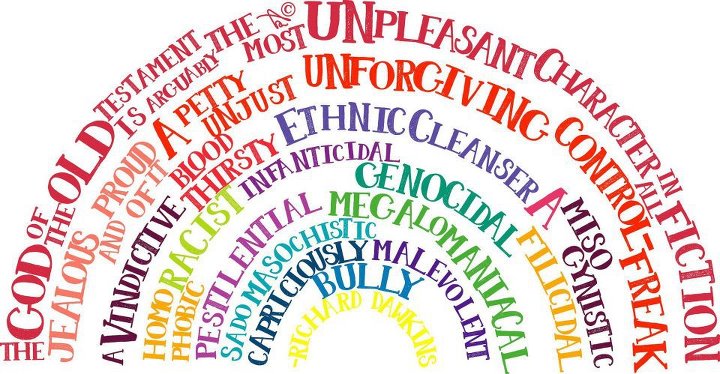 As 2014 grew closer I began thinking about Sunday School and the upcoming study of the Old Testament (link). A week ago I walked into Seagull Book and was overwhelmed by the number of Old Testament commentaries for sale. I’m sure all of these publications were written with an eye single to the glory of God with all proceeds going to help the poor, sick, and otherwise afflicted. What kind of a Mormon would sell scripture knowledge for money? (I have a hard time not typing what I’m thinking.) Anyway, I decided to use my post this month to discuss some of my thoughts on the Old Testament.

The authorship of the Old Testament (Hebrew Bible) has been discussed and debated by scholars within and without the Church for centuries. With higher criticism came the documentary hypothesis (link). To say that Mormonism’s response to the DH has been varied would be an understatement. Church authorities and scholars exist on a continuum from liberal to conservative (see Barney, Kevin. Reflections on the Documentary Hypothesis). The debate goes on today. I’m familiar with the subject and try to stay current, but I’m no expert. Bible authorship is something I think about on occasion, but I can’t say that I have a justifiable opinion. My biblical hermeneutic is comprised of at least seven principles I use to interpret and understand its text. (This list excludes spiritual mechanisms.)

Moving forward I’ll assume most will concede the influence of these principles on the Bible. As I consider this issue I’m often left wondering, what is real? It’s a ridiculous question to ask, but I ask anyway. Today it inspired a follow up question: What did they really say? A question as ridiculous as the first, but like always I ask anyway. My brain responded by churning out bible events and corresponding alternatives to the ones given in the text. There is no rhyme or reason to the following other than my own mental algorithm for weirdness.

Scripture – Of every tree of the garden thou mayest freely eat: But of the tree of the knowledge of good and evil, thou shalt not eat of it: for in the day that thou eatest thereof thou shalt surely die (Gen 2:16).
Alternative – Pick something from this bush that’s not poisonous. Whatever you do don’t turn this into some massive epistemological event.

Scripture – It is not good that the man should be alone; I will make him an help meet for him (Gen 2:18).
Alternative – I think it’s good for people to get married, even same sex couples. DON’T be a jerk to people with different sexual orientations – I made them that way so be nice. Also, quit telling people Eve was given to you as a help meet. She wasn’t. You’re not the boss of her so knock it off.

Scripture – And the LORD God caused a deep sleep to fall upon Adam, and he slept: and he took one of his ribs, and closed up the flesh instead thereof (Gen 2:18).
Alternative – I used one of your ribs while you were asleep. Please don’t think this event symbolizes Eve’s equality. That’s lame. If you want her to be viewed as equal just treat her that way. 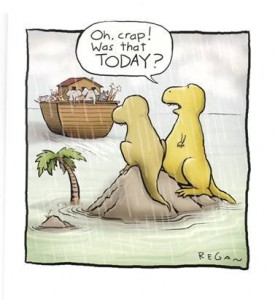 Scripture– Noah and the ark – (Genesis 6-9)
Alternative – One ancient bible guy to another ancient bible guy, “I’m gonna tell you this story I heard from one of those pagans from the next town over. It’s about a guy named Gilgamesh and a massive flood. If you want to retell it, make sure to change Gilgamesh’s name to Noam. No wait- Noam Nadelmann. Maybe just plain old Noam? Nah. How about Noah? That’s the one- Noah. By the way, if they ever find out our story has pagan origins, just pretend it is a mythic tale that has a moral quality to it.”

Scripture – [Lot’s] wife looked back from behind him, and she became a pillar of salt (Gen 19:26).
Alternative – Dear Diary, my wife died as we were fleeing the city. I don’t know why, but I feel the need to tell people she turned into one of those salt thingies that were right outside of town. I know it’s weird. Don’t judge me.

Scripture – Lot and his lovely daughters (Gen 19:31-36).
Alternative – Dear Diary, I know it’s has been awhile since I’ve written. Not a lot has happened…..well, there was that one time my daughters got me drunk and raped me. They are now pregnant. Time flies in the wilderness. It is from these events that my faith in the one true God blossoms. Goodnight Diary. #bigpimpin

Scripture – Neither shall thy name any more be called Abram, but thy name shall be Abraham; for a father of many nations have I made thee (Gen 17:5).
Alternative – God to Abraham: “Look, I know it doesn’t seem like much of a covenant now, but just wait a few thousand years and you can tell everyone they are related to you. Just be vague when you tell people about it and it will build some mystique.”

Scripture – Make curtains of goat hair for the tent over the tabernacle–eleven altogether (Gen 26:7).
Alternative – It is imperative that the tabernacle have eleven curtains made from goat hair! Seriously folks, I want goat hair curtains. Bezoar goat if possible.

Scripture – And Judah said unto Onan, Go in unto thy brother’s wife, and marry her, and raise up seed to thy brother. And Onan knew that the seed should not be his; and it came to pass, when he went in unto his brother’s wife, that he spilled it on the ground, lest that he should give seed to his brother (Gen 38:8-9).
Alternative – Onan decided that he wanted to sex up his dead brother’s wife, but he didn’t want the burden of being a baby daddy. So he laid pipe and pulled a Choo Choo train at the last second and spilled his seed on the floor. Also, playing the skin flute is an affront to God. Shortly afterward, God killed him.

I didn’t touch on the horrendous acts of violence attributed to God. Too depressing. While my alternatives to the scriptures cited above may only be humorous to me, they do illustrate my quandary in reading the Old Testament. It’s difficult to take seriously. Consequently, while I’m more than happy to allow the Bible to have a moral influence on me, I refuse to be bound to biblical details. There are some biblical stories and details which are supported by the Book of Moses and other modern works and commentaries but I wonder if they aren’t proof texts with a Mormon twist? Do modern “biblical” texts suffer from any of the other principles from my list? If so to what degree?

Most of the Bible’s characters are two-dimensional and there are too many begats, wars, and weirdness between each morsel of goodness. The Old Testament requires too much courtship before intimacy. What makes it worse is that it’s only afterwards, as your lying in bed with your Quad, do you realize that most of the relationship was mythic, allegorical, or merely symbolic. If I spent a year reading the Bible and a single day reading The Giving Tree, they would probably amount to the same moral influence. On second thought, the violence committed in the name of God would drop the Bible right below A Wrinkle in Time and right above The Alchemist.

Viliami Pauni- currently resides in South Jordan Utah and is disliked for not taking seriously what other people do; especially themselves and me.