The Old Testament Does Not Prohibit Homosexuality 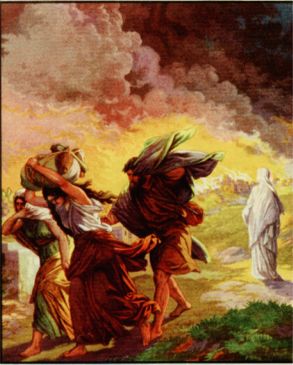 The section in Genesis for this week’s lesson is Genesis 13-14; 18-19, a crucial set of passages where the Bible paints a defining picture of Abraham, Lot, their families, and the world they lived in. There isn’t time to do proper justice to these sections, because understanding some of them demand a deeper knowledge of ancient pastoral nomad life in the ancient Near East.

For instance, the story in Genesis 14 of Abraham’s rescue of his nephew Lot and his recovery and disposition of the booty makes a lot more sense when one understands the art of the raid, reputation, and the role of wealth in nomadic societies. This story not only tells us about the rescue of Lot, it is there to explain how Abraham became a powerful figure in the region. For more information on this, I suggest you check out my podcast on Abraham in the Desert which runs just under 20 minutes.

That podcast also treats the topic of hospitality to a stranger, which is quite possibly the most important single social institution in the Patriarchal narratives. It comes down to this: show hospitality to the stranger and you enjoy the favor of God. If you don’t, you’re toast.

This brings us to the section that is likely to receive the most attention this week, and that is the destruction of Sodom and Gomorrah. There is a persistent, and incorrect belief that Sodom and Gomorrah were destroyed because of homosexuality. The Bible itself shows otherwise.

The story of Lot and Sodom is actually the second part of a story that begins when Abraham entertains some mysterious messengers, and does so lavishly. We get the whole menu; he orders Sarah to take “3 Seahs” of flour—nearly five gallons—to make cakes as just one part of the meal. Afterwards, Abraham is rewarded with the news that Sarah will bear a child. This blessing, coming on the heels of Abraham’s hospitality, would make perfect sense to the reader; cause and effect. The messengers then move on to Sodom.

When they arrive, Lot greets them and welcomes them into his house, just as Abraham had done. He offers them food and lodging. But then the men of Sodom gather around and threaten to rape Lot’s guests. Lot offers his two virgin daughters to the mob instead, but the angels take control of the situation when it becomes more than Lot can handle. They render the attackers blind.

It may seem strange, and even horrific to our sensibilities, but the primary rule of hospitality was that the host sees to the guest’s needs and provide for his safety, even at the expense of his own household. Lot offering his daughters to protect his guests was precisely the correct thing to do in this circumstance. Having seen to the needs of his guests as best he could, Lot, like his uncle Abraham, is blessed with the option for survival. Cause and effect.

By contrast, the rest of Sodom threatened Lot because of his observance of hospitality. Genesis notes all this to justify the destruction of the cities; they were guilty of just about the worst thing anyone could do, which was to abuse a stranger.  The stories of Lot and Abraham are a unit, to be read and compared side by side. Both tell the story of why the two men and their families survived and went on to produce serious progeny.  The fate of Sodom is meant as a warning, of course, but not to homosexuals, as we shall soon see.

By the way, an incident similar to that of Lot takes place in Judges 19, with the story of the Levite’s Concubine. It is another example of how the abuse of strangers and hospitality justified the near-extermination for an entire people (Be warned; this story is truly hideous).

Homosexual rape in the story of Lot is incidental. It is a threat made against the guests, but not the cause of the Sodom’s destruction. The Bible supports this. Sodom became proverbial to describe the worst depravity and degeneracy imaginable, whose only end is destruction.

So, it is very interesting to note that of the 27 references to Sodom outside of Genesis, not a single one makes even a passing reference to homosexuality. These outside reference are priceless for Biblical scholarship, they are an example of the Bible interpreting itself.

The classic instance of this is in Ezekiel 16:49-50 which castigates the people of Jerusalem:

“This was the guilt of your sister Sodom: she and her daughters had pride, excess of food, and prosperous ease, but did not aid the poor and needy.”

Another, Isaiah chapter 1, also enumerates the sins of Jerusalem, whom he addresses directly as Sodom and Gomorrah (v. 10):

Hear the word of the Lord,
you rulers of Sodom!
Listen to the teaching of our God,
you people of Gomorrah!

Verse 17 implies what those sins are, by stating what the people should be doing:

… learn to do good;
seek justice,
rescue the oppressed,
defend the orphan,
plead for the widow.

Not a word about homosexuality. As in Ezekiel, the sin is the abuse of the vulnerable. There are other examples I could cite, but the main point is that homosexuality does not show up where we would expect to find it. If it was the reason for God’s tactical nuke-out of Sodom and Gomorrah, why doesn’t anyone else make that association? The reason is because a careful reading of the Old Testament shows that homosexuality was not a sin.

Leviticus 18:22 is the primary justification for outlawing homosexuality, but this interpretation ignores the context of this prohibition:

You shall not lie with a male as with a woman; it is an abomination.

First, notice that only males are mentioned. The Old Testament says not a single word about female homosexuality; lesbians, you’re in the clear. This proves immediately that one cannot cite the Old Testament to prohibit all homosexual behavior.

But what about male homosexuality? Verse 22 comes after a list of prohibited sexual unions, nearly all of which are between close relatives. The point of the chapter is to protect the holiness of the land of Canaan. This was a major concern to the authors of Leviticus; they believed that if the land became defiled, it would physically eject the offending peoples. Verses 24 and 25:

“Do not defile yourselves by any of these things, for by all these the nations I am casting out before you defiled themselves;
and the land became defiled, so that I punished its iniquity, and the land vomited out its inhabitants.

This is very, very important. Verse 22 goes to the trouble of specifying the homosexual male congress as “an abomination.” But what is an abomination? In Leviticus “abomination” has a very specific, technical meaning. If you keep reading through to verse 30, you’ll see two things. First, the land itself was holy and subject to defilement. Second, an “abomination” is any act or practice that defiles the holy land of Canaan in such a way as to provoke the land into “vomiting out” the inhabitants. This applies explicitly and specifically to Canaan, and only to Canaan.

We also need to examine the phrase “to lie as with a woman,” which in Hebrew is mishkeve ‘ishah. It is an idiomatic phrase that only refers to illicit heterosexual relations. One cannot mishkeve ‘ishah with one’s legal spouse. This raises a question: if the verse goes to the trouble of prohibiting male homosexuality based on some kind of forbidden heterosexual intercourse, what would that be?

The only example that makes any sense, given the context of the passage, is the prohibited heterosexual unions between close relatives, just like all the other examples in the chapter, with the exception of adultery. Adultery would not fit, as it would still permit intercourse between unmarried men.

Therefore, we must conclude from a close reading of the text that male homosexual union was only forbidden under the following circumstances:

There is much more that could be said regarding this; for instance, what about the passages in Paul that appear to prohibit homosexuality? Space does not allow for a fuller discussion, but I will say that some recent analysis of those passages throws significant doubt on the idea that they actually reflected Paul’s beliefs. But what is even more relevant is that Paul apparently wasn’t a big fan of sex, period.

But even without the additional analysis, it should be clear by now to any objective observer that the prohibitions against our gay brothers and sisters yield only a harvest of shame, hate, and degradation. They rip apart families, justify discrimination, and driven otherwise well meaning people to disown family and friends, or even to take their own lives. It is unacceptable for these toxic attitudes to persist at all, let alone receive religious sanction through a misreading of the Biblical text.

I have a fuller discussion of this subject on my personal blog Cogito! For those who are interested.