My Wrestle With the Issues Surrounding Legalizing Same-Sex Marriage 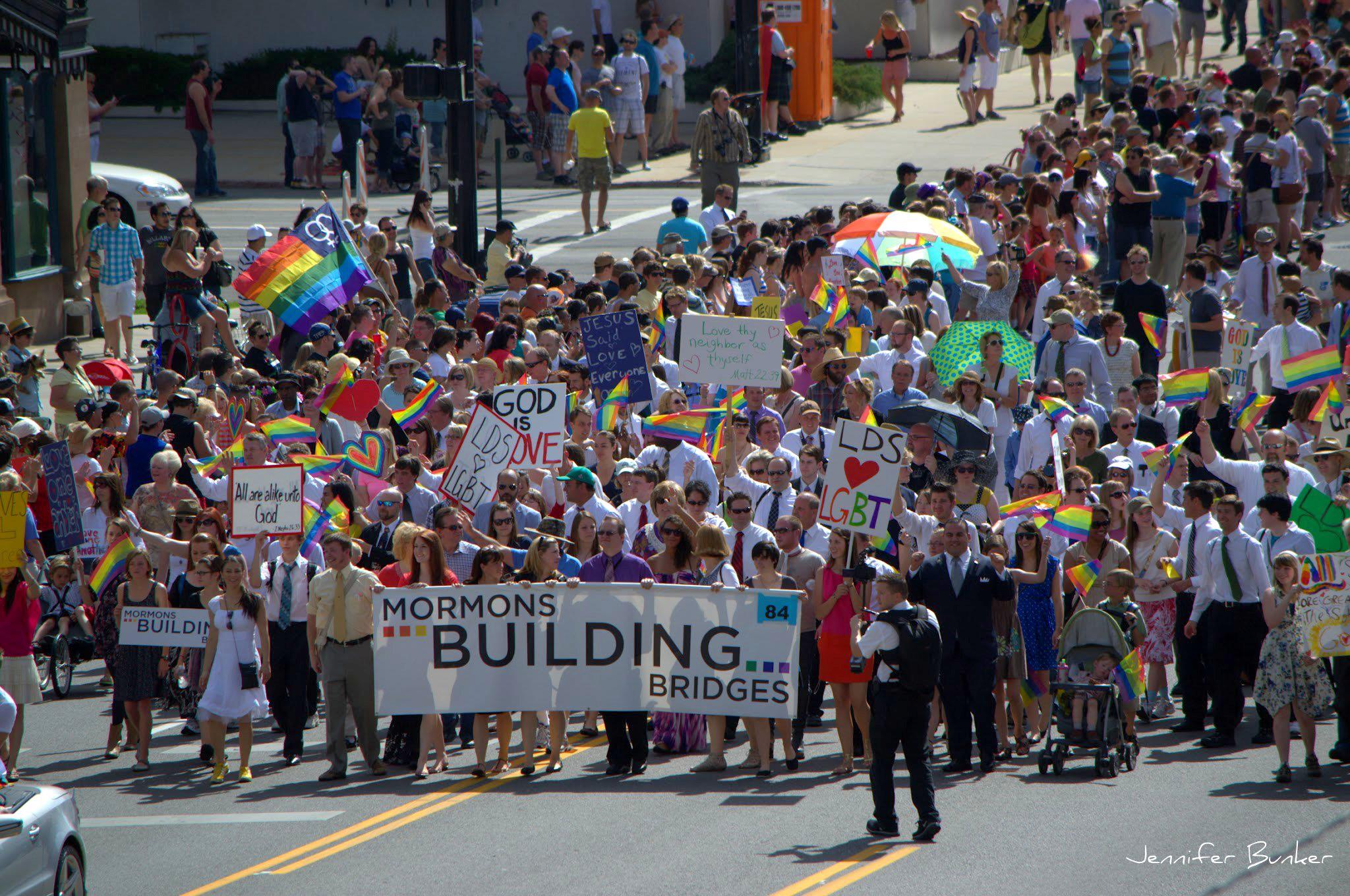 Up until a few months ago, I was on the fence about LGBTQ issues. I’ve literally written this post 5 times. It started as a way for me to find an answer, asking you readers to sway me. Not anymore. I still have questions, but I’m now in the yard seeking for marriage equality. This post has morphed over the year that I’ve had it as a draft into a story; my story of how this came to be.

You see, in 2008, when prop 8 was put on the ballot, I was in Utah. I’ve always considered myself a Californian and hate saying that I live in Utah. I was also on the complete opposite side of the fence from where I am now. I was still orthodox, as well. So, what do I do? I volunteer to work a call center, of course. To top it off, they gave out free pizza. Looking back, I feel like I sold my birthright for a mess of porridge. After prop 8 passed, I was ecstatic. I was thrilled to think that I could tell my future kids (I wasn’t even married yet. Scary thinking, right?) that I had helped. That I had made a difference (even scarier thinking, I know). I didn’t give it much thought again until my faith started changing and I really started looking at what I believe.

The next event I remember happening that challenged the way I thought in regards to LGBTQ rights was in December of 2011. Lots of time had passed, and I had thought about the issue probably starting earlier that year, but I was still aligned with the church thanks to some mental gymnastics. But in December, a family member who wasn’t a member of the church came to visit my wife and I. We were living in Utah County at the time and he was coming from Orange County, so we took him to do some pretty typical winter things like snowboarding, sledding, and a snowball fight. One night, we took him up to see the lights on Temple Square. On the way home, he asked me how my church could do such terrible things to the homosexual community and stand behind such a terrible law.

I tried to explain it, but he just looked at me weird. Apparently, the whole separate but equal thing didn’t work, even if you called it something else like “sanctity of marriage.” MormonMatters.org states “To some, it was a stunning encroachment on civil liberties and a wrong-headed involvement of the Church in political affairs. To others, it was nothing more than the Church defending traditional marriage and engaging in a coalition with other like-minded organizations.” I saw it as both: I considered the act of homosexuality to be a sin; however, I also consider marriage to be a right. So how could I deny a right to someone because of the way they were born? In my mind, it is  exactly like denying blacks the priesthood and blessings of the temple because of the way they were born.

Most orthodox members try using morality to argue the legality of prop 8 without bringing religion or even Christianity into the picture. Without morality in the law, they say, it would be legal to murder. To steal. To rob banks and so forth and so forth. Morality must have a place in law; without it, all would be lost. That argument is flawed at best. Yes, morality  must be involved in law. But what happens when your morality is imposed on other people’s beliefs? What happens when one person believes what is moral actually makes other people so unhappy they kill themselves? And these “other people” aren’t psychopathic murderers; they aren’t rapists; they don’t hurt other people in any way shape or form. And the one thing you want to make illegal – their marriage – is what brings them the most joy in life. Is it moral to take away the greatest joy of someone else’s life? I would not be able to live with myself if I was told to live alone all the days of my life, and then scorned and looked down on by so many people.

As an LDS member, I have heard a couple of members of the church say that if same sex marriages are legalized, then temple marriages would be put in jeopardy. First, for those non-LDS people that may not be familiar: a temple marriage can only be obtained by devout members of the church; not just any member can walk into the temple. Being morally chaste is a requisite for you to be married in the temple; being morally chaste means not engaging in homosexual activities or sexual relations outside of marriage. So, if that is the case, then homosexual marriages cannot be performed in the temple. Now, back to the argument: if homosexual marriages are legalized, then the church will be forced to either perform them in the temples or shut the temples down. I think this comes as a fear from past history. When the church was doing away with polygamy, the government threatened to take possession of the temples. Today, this argument has no precedent. Massachusetts has a temple in Boston and also legalized same-sex marriages; no government agency has come forward telling the church they must perform them “or else.”

As the final argument, the church simply opposes it. I remember as a kid living in California that my dad would campaign for Proposition 22 (click on the link for detailed info). This was the for-runner to Prop 8 as I see it.

Proposition 22 was a law enacted by California voters in March 2000 to restrict marriages to only those between opposite-sex couples. In May 2008 it was struck down by the California Supreme Court as contrary to the state constitution.”

This was something that the Church was very strongly committed to. While I don’t remember if they asked us to do so over the pulpit, I do remember my parents, especially my dad, going out and asking our neighbors and friends to support it. It passed the voters block, only to be hit as unconstitutional in 2008 by the California Supreme Court. So what happened? Prop 8.

Prop 8 was a proposition to alter the California state law to define marriage as between a man and a woman, thus legalizing prop 22. It is no secret that while the church was not the only donor behind Prop 8, it was a very strong and vocal one. It urged its members over the pulpit in California to spend time and money supporting it. It asked members of the church in other states to spend time on the phones, calling voters and asking them to protect marriage, though in the end they did leave the decision to support it or not up to each individual member. But that’s like you’re parents telling you “I would rather you not, but you decide,” when you’re 10 or 12: chances are, you’re going to side with the authority figure.

So if those are the common arguments against the legalization of homosexual unions, what are the one’s in favor of it?

That is probably the simplest explanation for the purpose of not only this life, but of our entire existence. It’s simplicity is profound in ways I don’t know how to enunciate. The greatest joy in my life is my wife and (one day) my children. This is a very sacred and very moral joy; it’s not like my greatest joy in life is something immoral. If you take away the greatest joy of someones life (the opportunity to be a family with the person you love the most), it then becomes their greatest loss. How can someone take away the opportunity of another’s greatest (moral)  joy? If it is not good for man to be alone, then why is the church pushing that on homosexuals? Why is celibacy good for some (homosexuals) but not the majority of people?

Many people, especially those outside the LDS church, view this as a civil rights issue. There is strong scientific evidence that people are born with their sexual orientation set (evidence, not proof). If you’re not into a lot of science jargon, read the last line: ” indicating a statistical confidence level of more than 99 percent that at least one subtype of male sexual orientation is genetically influenced.”  IF this is the case (that if is capitalized on purpose) then denying someone the right to marry based on the way they are born would fall in line with denying someone a seat on the bus because of the color of their skin. Doing so would be morally wrong. See how you can use morality for both arguments?

“Jesus didn’t say, ‘Love the person that is really easy to love or that you feel comfortable with.’ He said, ‘Love everybody,’ ” Erika Munson, founder of Mormon Building Bridges.

Finally, let’s try to understand these people, at the very least. I am by no means an expert on this topic; I know only one openly homosexual individual, and I haven’t talked to him in years. I don’t pretend to know everything about the subject – to the contrary I know very little. But what I do know is that these people are to be loved, not tolerated. We are to do the loving, not the hating or condemning. Forget the old saying “love the person, tolerate the sin.” Just LOVE them! We have no idea what kind of trials they are going through.We just don’t know and cannot know. I love how Lolly Weed – who’s husband came out as gay in June of 2012 – says it. If a Mormon homosexual wanted to stay true to their faith, they would never get what most Mormons get—to be loved in an intimate way in the way that they desired and have it be sanctioned by God. Something so basic, so needed and yet so out of grasp for so many people.

So then, which way should it lean in a court of law?

As you reply, think of this quote from my friend’s FaceBook wall:

“It doesn’t matter how you feel about homosexuality; we must foster a society where  ANYONE do(es) not feel the need to kill themselves to escape cruelty.”