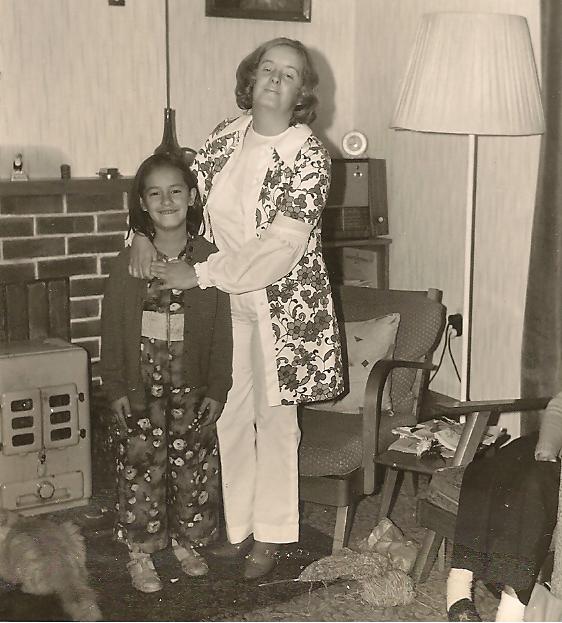 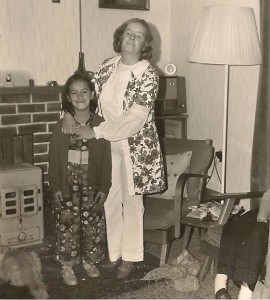 Gina and her mum

I was at my mother’s wedding.

I was my mother’s nine-year-old bridesmaid, dressed in a royal blue velvet dress with a round neck and an empire line marked by a white lace trim.

I followed  my mother somberly as she made her way up the aisle of the Calvary Chapel to a waiting priest and her Catholic groom. She was Mormon and I was Mormon and though very young, I felt as though I was in a pageant for strangers, performing a part that didn’t quite suit.

The wedding breakfast was celebrated in my step-grandparents’ turn of the century villa with its large open fires and it’s wood paneled reception rooms. Careful toasts were made with crystal glasses brim with spirits and wine. After the formalities the volume grew in the increasingly close, increasingly warm spaces as the beer began to flow in congratulations. Late into the night my step-father’s male relatives finally stumbled and tripped out the door into the cool winter’s evening with tearful advice for the newlyweds while their wives, clutching faux fur stools and shimmering purses steered them towards their waiting cars.

My favorite part was the plentiful crayfish that lay about on platters without supervision. The rest of me was all disdain. Mine would be a Mormon wedding, in an LDS chapel, with people who didn’t need alcohol to be congenial. I determined then that I would not have this kind of wedding. Ever.

Ten years came and went and I found myself the bride. But in 1986 the law in New Zealand required all wedding ceremonies to be solemnized in a public space. This necessitated a civil ceremony first, after which the private temple ceremony could be conducted.

We spared no expense. Twin jaguars festooned with lavender corsages were hired, the meeting house at 25 Fendalton Road was decorated with ribbons, bows and impressive towering floral arrangements. I walked down the isle to my own LDS groom, wearing a bright white lace frock that whispered and swished as I kept time with the wedding march. Later a reception was held where I picked at the three course dinner that I felt obliged to consume in the sweltering December summer sun, while the guests abandoned the wedding party to cooler air outside.

Nine months later we went to the temple and were sealed on my then husband’s baptism anniversary.   I have few recollections of that day – certainly not enough to record here. Perhaps they were flushed away with his adultery, and an acrimonious divorce three years later. I can’t explain my total lack of recall. But I do remember the day a letter came from President Hinckley expunging my temple marriage and permitting me to proceed to the temple to be sealed to my new husband Nathan.

This time I was unimpressed with the notion of a pretentious and over-designed civil ceremony. I was happy enough with a small gathering of close friends in the back garden with cake and non-alcoholic grape juice. But my never-been-married husband insisted on an occasion. I refused to cooperate with a guest list, so he invited everyone. I didn’t want a traditional reception so he announced it would be a potluck. I didn’t want the fuss of a traditional wedding dress so I borrowed a pretty vintage number and made a new sash for it. I didn’t want to be walked down the aisle and ‘given away’ – I was already my own person. So I arrived for the second time in six years at 25 Fendalton Road in fluffy slippers (I’d misplaced my shoes) as friends, neighbours, colleagues, church friends and family filled the chapel. We organized it for 7pm on a Friday night incase people wanted to come to a wedding rather than go to the movies. It was delightful. I honored Nathan’s wish for a church ceremony but we both quietly mocked the proceedings with gentle barbs and humorous antics.

Three days later we went to the temple and were sealed in the presence of three observers, and the requisite temple workers. One observer was my mother, and the other was a couple I didn’t really want to be there. Notwithstanding it was  glorious. We cannot deny that we mutually felt the joyous proximity of the heavens as our union was sealed for eternity.

Over the last 20 years I have often questioned my marriage to a callow youth; recently returned from his mission; with little relationship experience. But as I grasp for reasons for our union, in those stickiest of moments, I tend not to recall a hasty courtship or a jolly civil ceremony. I remember our temple sealing and the extraordinary experience of hearing the heavens sing.

The law has changed in New Zealand now. A couple can now proceed straight to the temple to have their marriage solemnized. While on the one hand I do agree that it deprives family members and friends from witnessing an important event, it might actually be a boon to the couple. We certainly felt that our temple marriage was more profound because all the other trimmings had been stripped back. We were spared the complex negotiations with the bridal party; the fuss of silly and uncomfortable clothing; the venue decorations; the photography session; the organization of the food, and the expense, the expense, the expense.

In truth I’m very cynical about weddings. These days they are productions that have been contracted out to the private sector as profit-making ventures. Weddings are an industry. They are beautifully designed as the ultimate seduction. But, lets face it, they’ve done a poor job of the business of marriage! I question many things about our LDS faith, but I have never questioned the enormous power and possibility vested in a simple temple ceremony, and I’m very pleased that we reduced the noise of the many other wedding antics that might have made our hearts dull of hearing as we kneeled across the altar from each other, eyes wet with tears.

As a wee post-script. I’d always been violently disappointed in my late mother’s Catholic wedding that eventually ended in divorce. So my final act of healing from that debacle was to have her and my late father sealed in the Salt Lake Temple with three friends acting as proxy. As I placed the bonds of eternal kinship around a family I had never had in life, the temple ceremony allowed me to settle an intense disappointment with my birth parents’ life decisions.
I don’t know if that means we will play happy families forever, but I’m grateful for the opportunity to believe that it just might! 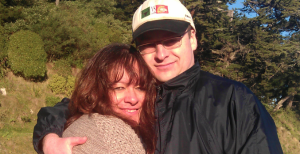 Gina and her hubby

click here to listen to a wonderful podcast with her on a panel discussing Pacific Island Mormon identities;

click here to listen her discuss the new LDS scriptures;

click here to listen her insights on new ways to think about Mormon pioneers;

click here to listen to Dr. Colvin’s input in a discussion about what is Mormon doctrine;

click here to listen to her input in a discussion about Mormonism and racism.