MY DAUGHTERS DESERVE BETTER: GIVING AND GETTING 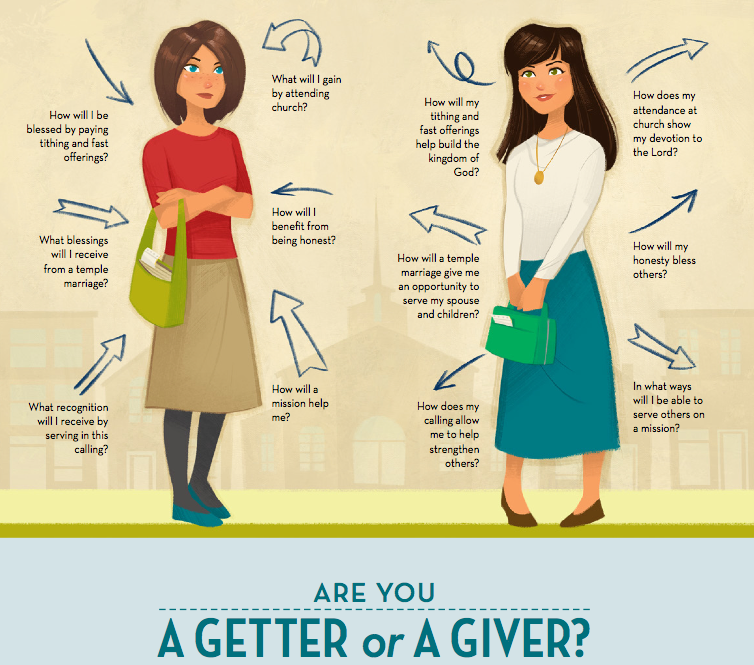 Yesterday was one of those rare days where my wife, Cathy, and I were able to meet for lunch.  When we sat down, she said, “Mike, take a look at this.  It’s from the New Era1.”  She showed me the above picture which she had on her phone. I could tell she was irritated. I looked at the cartoon drawing and told her to, “Give me a minute to think about it.”  I needed time to process what Cathy saw as the possible problems with the drawing.  It didn’t immediately come to me – I’ll be honest. Cathy then began to point out all the problems with the message that this picture is giving to teenage Mormon girls. We have two daughters – a fourteen year old and a soon-to-be ten year old – so we keep a close eye on these types of things. The following questions, which are addressed to the editors of The New Era, come from my conversation with my wife yesterday. For ease of reading, I will call the young woman on the left, wearing the red shirt, “Getter.”  The young woman on the right, wearing the white shirt, I will call, “Giver.”

After Cathy and I chatted, we decided we would show the picture to our fourteen year old daughter. We discussed how we wanted to ask our daughter her thoughts in a way that wouldn’t give away our issues with the message being given – we wanted to hear her thoughts, not what she thought we wanted to hear. So during dinner last night we asked her an open ended question, being careful of our tone. “Look at this picture and tell us what you think about it.”  She looked. “Well, the one on the left is talking about doing stuff to improve herself.  The one of the right is talking about stuff that will help others.”  Then it happened. And this is the eleventh and the last question I will ask. It is the question our fourteen year old asked Cathy and me:

1. To read the article in its entirety, click here.