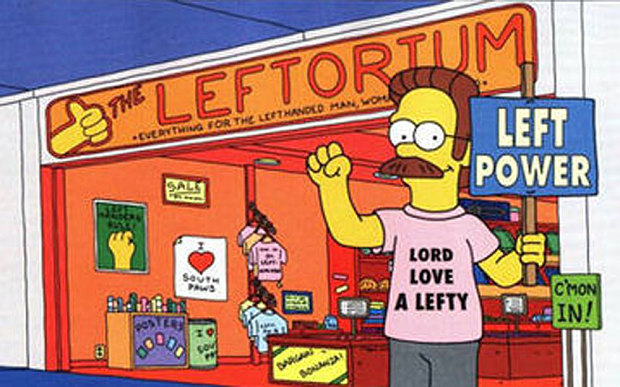 Note: This post first appeared on No More Strangers on January 20, 2013

I’ve always had an excellent memory. This is both a blessing and a curse. Some of my earliest memories are feelings of frustration, inferiority, and wanting to be someone different that I was. I learned very young that I didn’t fit in to my family. There are seven people in my family – dad, mom, 3 brothers, 1 sister, and me. I was the only one with a birth defect. I am left-handed. To many, this is no big deal. To my dad, it was a HUGE deal. He was bound and determined to change me, make me normal, to conform and fit in like I was supposed to. Like all my other siblings did. In his eyes, it was a weakness he saw in me and he demanded perfection from his children. But I was born left-handed. It wasn’t something I chose, nor could I change it.

So at the ages of 3, 4, and 5 – as I was starting to color, draw and learn to write – it became obvious to my parents that I was favoring my left hand. It seemed rational to my dad that if he stopped it early enough, he could change my “handedness”. He was insistent that I become right-handed. He said if I just worked hard enough, I could change. I doubt it ever crossed his mind that it couldn’t be changed.

As I started school, I came to realize that the world as a whole was made for right-handed people. And if you’re left-handed . . . well, you just had to make do the best you could. And pretend that simple, daily activities weren’t a struggle for you. The school desks were made for right-handed people. Spiral bound pads of paper and 3-ring binders were nearly impossible to write in since the rings were in the way of your hand. There were rarely any left-handed scissors to use. To use a computer mouse, you use your right hand. There are countless more examples I could give you. Convenience is taken for granted if you are right-handed. If you’re left-handed, it’s much tougher. These new realizations seemed to echo my dad’s feelings and validate his desire for me to be normal and fit in – by being right-handed.

So I went through about a decade of being forced to do everything right-handed. Throughout these years low self-esteem, deep frustration, and a perceived loss of love and acceptance became deeply instilled in me. More damaging still is that these feelings came from my dad, who I completely idolized and wanted to please.

My dad would show me old dictionaries that defined left-handed as “evil, conniving and sinister”. I remember thinking, “Is this true? Is this how my dad sees me?” Often, my dad and I used to read scriptures together. One night, he read me every verse in all four standard works that says the righteous are on the right hand of God and the wicked are on the left hand of God. Then he said, “Try harder, Wendy. We want you with us on the right hand of God.” This hurt the deepest. Not only had my dad led me to believe I was evil, sinister, and conniving; but I was also wicked, unworthy of God’s love and wouldn’t be with my family in Heaven. All because one hand worked better than another. I always wore a sock on my left hand when I did homework so I wouldn’t be tempted to use it. But then I would get poor grades for sloppy penmanship. So frustrating, so disheartening. I remember having feelings of guilt and shame when I would sneak and use my left hand because it was so much faster and easier for me. But when I did that, I felt like I was sinning.

I remember very clearly one particular dinner. I was five years old. We were eating spaghetti (a hard thing for a kid to eat anyway). My dad would take the fork out of my left hand and put it in my right hand, making me eat right-handed. Inevitably, I would spill spaghetti all over myself. Frustrated, I would put the fork back in my left hand so I could eat. He would change it back. Over and over this happened. I was trying SO hard, but still making a huge mess. Tears of frustration came to my eyes. I just couldn’t make my right hand work right! I distinctly remember looking around the dinner table at all the other members of my family and thinking, “How come their right hands work and mine is broken?” I kept hoping someone would come to my defense, help me, or tell my dad to leave me alone. No one did. Maybe they thought my dad was right in forcing me to be right handed? I don’t know. At the end of this awful meal, I made a promise to myself that I was going to MAKE my right hand work and I would be PERFECT with it so that my dad would love me and be proud of me. I was a very determined child and had no doubt that I could do this. That decision, made as a five year old, still impacts me today. More on that later.

From kindergarten to about my sophomore year in high school, I would do my regular homework – all right-handed, of course. Then I would practice my writing some more. I would write three pages of each letter in the alphabet every day; and every week I would show them to my dad so he could see my improvement. I would say things like, “Look how much better my “S” is! The “M” still needs some work, but I’ll get there.” I was so anxious for his approval of me. I wanted to feel like he was proud of me and I wasn’t an embarrassment to him anymore.

Over the years, I became ashamed of being left-handed, and tried to hide it from people. I didn’t want them to think I was broken, too. I got pretty good at doing things right-handed – eating, writing, brushing my hair and teeth, playing sports, etc. But even after all these years of trying, I hadn’t really changed. My comfort zone and where I longed to be everyday was using my left hand – free from criticism and disapproval. Through the years of forced practice and an untold number of tears, I became ambidextrous. I play sports right-handed now. I have never even used a pair of left-handed scissors.

This decision made 32 years ago as a wounded, but determined five year old still affects me to this day. Because I thought my dad expected a PERFECT daughter, I became a perfectionist, and not just in areas related to my “handedness”, but in all areas of my life. Sometimes this is a good thing. But so often I give myself undue stress trying to be perfect. In some ways, I’m still seeking his approval and wanting to feel “good enough” for him.

I worried a great deal over writing this story. I wasn’t sure how detailed I should be over how this experience made me feel because I didn’t want to hurt my dad. Please do not get the wrong idea about him. He was (and still is) a loving, wonderful father. He honestly felt like my life would be harder as a left-handed person. He was trying to help me. He thought I might be teased. He worried how school would be for me – never any left-handed scissors, the desks were made for right-handed people, and no one would want to eat lunch next to me because we would bump elbows. He said left-handed people have awful, slanted handwriting. Baseball mitts and racquetball gloves were twice as expensive for a left-hander than for a right-hander, etc.

My dad did all the wrong things for the right reasons.

The reason I share this experience with you (and in such detail) is to illustrate the impossibility of changing core parts of who you are. I am 5’5”. I have hazel eyes. I’m a brunette. I am left-handed. None of these attributes did I choose for myself, nor can I change them. I have felt first-hand the pain, frustration, and alienation that come when you try to change the unchangeable in yourself. Sometimes I wonder what it would have been like to grow up feeling completely loved, accepted, and maybe even celebrated, for my differences. Would I still be a perfectionist? Would I still feel the need to prove I’m “good enough”? I can’t answer these questions, but I am genuinely grateful for this experience. I am grateful because even though this example is so small compared to what a gay child may go through, I understand some of their feelings. I have an extra level of empathy and compassion for my son, as well as other gay men and women. I won’t EVER try to make him something he is not. In fact, some of my most favorite things about my son are probably characteristics he has BECAUSE he is gay! If he changed his sexual orientation, then HE would change. And I love him EXACTLY the way he is!

My challenge to you:

Now multiply that by a thousand and imagine a LIFETIME of that. Welcome to the life of a gay man or woman.

Be compassionate. Be kind. Be accepting. Love as the Savior loved. That’s it. He asks nothing more of us.

WENDY MONTGOMERY was born and raised in Southern California. She has always been a member of the LDS Church and is currently the Sunday School teacher to the 16-18 year-olds in her ward. She and her husband Tom Montgomery were married in the Los Angeles Temple in 1995. They had 5 children in 7 years – not recommended. They found out in January of 2012 that their oldest son (13 years old at the time) was gay. It has at times been unbearably painful. But it has also been an enlightening, spiritual and joyful journey. Wendy has many new heroes, many of which are writers on this blog. She and her husband and children live in Central California. Wendy is a voracious reader and is currently working on her fictional degree in Gay Mormon Studies.

All posts by Wendy Montgomery