Musings of a May-December Hopeful Romantic 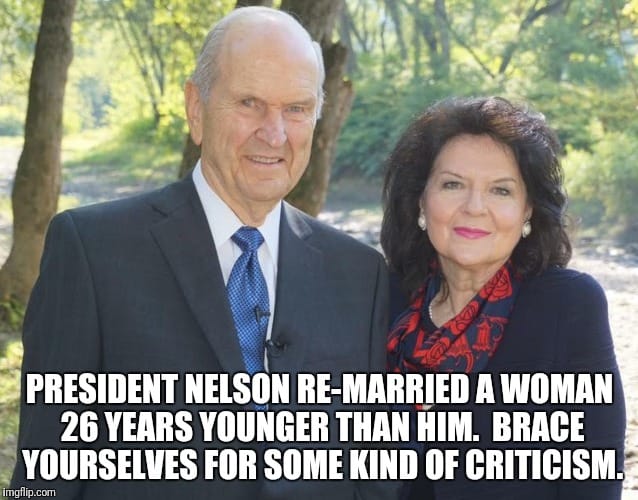 CW: Mothers favored in the LDS Church/Women’s worth tied in with child-bearing

Last week, Russell M. Nelson became the new Prophet of the Church of Jesus Christ of Latter-day Saints. His wife, Dr. Wendy Watson Nelson is an accomplished writer and former professor of Marriage and Family Therapy at BYU. The two married, and were eternally sealed in the Salt Lake Temple in 2006, just two years before my husband and I got married. We and the Nelsons share one thing in common – a 26 year age difference. Similar to my situation, this was her first marriage, while this was certainly not his.

I too, know what it is like to have advanced degrees and no husband. I used to joke that I had walked down the aisle more times than the average woman – wearing a cap and gown (I’m working on a PhD; so hopefully, I’ll be walking down the aisle one final time)! I finally got married in my late 20’s, so I can’t imagine being in my 50’s and not having found “the one,” as Sister Nelson did. Also like her, I will probably never have children. It’s just not going to happen, barring of course, the Immaculate Conception, which as Mormons, we all know is false doctrine anyway.

Marrying a man 26 years my senior was not exactly my plan, but my husband and I love each other very much and have been together now for twelve years. We celebrate ten years of marriage this September. The most difficult part of our marriage has been the misunderstandings it has created, along with the rejection that accompanies it – mostly from family. My family has accepted him – for the most part, but his side is a different story.

If I could talk with Sister Nelson, I would ask her questions, such as how she relates to his “children” that are close to her age (or older!)? What do they consider her? – I’m sure they don’t call her “Mom” but she’s not exactly their “step-sister” either. Furthermore, how does she relate to his grandchildren (and great-grandchildren, in his case!), considering she has never had children herself? Do they call her Aunt Wendy? These are the types of questions that plague me every day in my own marriage. How does it feel not having living Parents-in-Law? I’m sure for many women it would be a blessing in disguise to not have a Mother-in-Law, but for me it hurts not having heard the words “Welcome to the Family” from anyone other than my husband. It’s a rather lonely place to be in and makes holidays difficult when you can’t have a real sense of extended family. In my case, I was looking forward to marrying into a whole new family, but sadly, it’s just not there.

As a Mormon, there is the issue of eternal sealing – the proverbial “elephant” in the room nobody wants to talk about. Since President Nelson is widowed, he is now eternally married to more than one wife, which in a technical sense means he’s in a plural marriage. His wife has to deal with this issue too, by default; but at the same time, I would imagine she understood that when she married him. As a Mormon convert, this is also a worry of mine. I do have the advantage of my husband being a non-member, but given the rules, I worry that somebody will come along 110 years later and ruin my celestial honeymoon with an extra sealing.

But there is more. Given the statement made last week by President Nelson concerning a woman’s purpose being tied in with child-bearing, if you think about it, is he really practicing what he preaches? Unless his wife gives birth in the Celestial Kingdom, she will not be giving him children. I wonder how this makes her feel to hear her husband – the Prophet – say something like that! There has to be some cognitive dissonance there, in addition to feelings of failure in this mortal life. I understand, because I deal with these same feelings of inadequacy every time I go to church.

There is yet another aspect of this story to consider, and this, in my opinion, has to count for something in the eternal scheme of things. I’ll admit when I got married just shy of 29, I felt like the “Old Maid” in the card game I used to play. I waited an eternity for my husband, at least from my perspective. But I could not imagine being an accomplished marriage and family therapist and having to wait until my 50’s to get married – and being Mormon! However, it would seem to me that in the end, Dr. Nelson got the prize. Not only did she find the man I’m sure she prayed for all those years, but now she is the wife of the Prophet! I believe she waited for God’s timing, and for that she was rewarded greatly. She is now in a place to be an inspiration to Mormon women everywhere – she is what I would call a church “Matriarch” in the truest sense with a lot of influence.

While I will never be wife of the Prophet – or even wife of a “Priesthood Holder” (thank goodness!), my husband and I have shared our own uniquely profound spiritual experiences (some of which I have shared in previous posts). I believe many of these experiences occur due to his noteworthy Hebrew lineage, of which I personally don’t share. For me, being the lowly “Ephraimite” I am – and an ex-Baptist, at that – I’m not quite sure what I did to deserve these spiritual experiences, but I am thankful for them. Every day.

While my prayers for a “goodly” husband were honored, some days the loneliness and disconnect we feel in our marriage is so unbearable, at least it is for me. And yet, we still have each other. Between the two of us, there is a lot of love there. I ask myself all the time why I just can’t be happy with that? I often wonder if I made some kind of compromise in the Pre-existence in order to be able to share in these spiritual experiences with him? I guess I will never know. That said, I am so thankful for my knowledge of my Mother in Heaven, and nobody can ever take that away from me. I should be thankful every day and not “wallow” in self pity. But how many of us, if we are honest with ourselves, have dwelled in self pity due to feeling misunderstood, even in the midst of our many blessings? It is sometimes difficult to see our own blessings when they are different from the blessings of those around us.

But that proves my point. We never know God’s plan, and God’s ways are not our ways. I believe the same goes for the Church and our unrealistic expectations towards other members who do not fit our preconceived notions of “worthiness.” I recently had an experience where I wrongfully judged someone who is not a member of our church – and the Holy Ghost let me know it in a very real way. At the same time, I have felt misunderstood many times over by church members and non-church members alike. We need to forgive and try our best to move on. Nobody is perfect; everyone makes mistakes. Each situation is different, and in the end, our Heavenly Parents are the only ones who have the divine right to judge.

That said, I’m convinced LDS May-December romances can be a beautiful, eternal mess, but now my husband and I have an example within the Church leadership to look up to. I no longer need to be ashamed of my own circumstances at church because the Prophet’s wife is in a very similar situation to that of mine. This for me is a great comfort. While I understand many progressive Mormons were upset on the day Nelson was installed, I had my own personal reasons for rejoicing. This does not mean I support everything President Nelson stands for – I most certainly do not! – but it means that I have hope that my own eternal mess of a marriage can be blessed by our Heavenly Parents in a very special way.