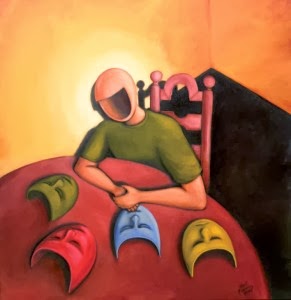 In my previous post on this topic, I gave an exceedingly brief overview of some of the differences between premodern, modern, and postmodern religious institutions in terms of their structure and conceptions of authority. It was summarized like this:

I discussed how Mormonism (and most current world religions) is situated squarely between the premodern and modern worldviews and actively resists or rejects the basic premises and tenets of the postmodern worldview in terms of how it thinks about its structure and nature of authority.

Here I wish to briefly discuss how postmodern conceptions of the self might also offer some insights to help some people (especially those of a Rational Faiths audience) navigate the strong tension between community and individuality in contemporary Mormon culture.

How does postmodernism conceive of individual identity and the concept of self?

In modern thought people are separate, coherent individuals—or ‘selves’—who think and act independently of all other individuals. … In postmodern thought, this construct is being called into question. …

The postmodern person is thus a hybrid. They have, not one core, permanent self, but many selves. Their self—and their identity—are not fixed, but continually in process, as the boundaries between themselves and others, and between the different parts of themselves are negotiated. (Source.)

In other words, the premodern and modern paradigms assume that everyone has One True Identity/Self just as there is One Ultimate Truth. Many postmodernists, however, would argue that each person has multiple identities/selves that are subjective and contingent on the context and nature of the interaction.

In her book Christianity After Religion, Diana Butler Bass talks at some length about the increasingly common phenomena of “multireligious identities,” a concept which is right at home in a postmodern world. “In the same way that some people are biracial or multiracial, she writes, “others are describing themselves as multireligious. Recently, I spied an advertisement in a major American airport that read, ‘Who says you can’t be devoted to more than one religion?’” She goes on to describe individuals in a focus group that she conducted as they talked about their multifaith identities. “A proud Methodist confessed that he was also a Roman Catholic. … An Asian American in the group interpreted his Christian faith through the lens of Japanese culture. … One women is both Christian and Muslim and participates fully in both communities and sets of practices. ‘Becoming a Muslim,’ she told me, ‘has made me a better Christian.’” (60)

How might all this be applied in a Mormon context? There are several applications, and here is one:

“Borderland” Mormons often struggle with the tension generated when they feel that their “authentic” selves come into conflict with the dominant church culture which prizes community, conformity, obedience, and (to a degree) anti-intellectualism. While they might value and honor their Mormon identity and heritage, they may eventually chose to disassociate from the Church and/or their religious identity in an effort to alleviate the cognitive and emotional dissonance generated when the Church takes actions or makes priorities that they perceive to be incompatible with their core values or religious identity. Alternatively, they may choose to disassociate from the Church as they feel that they cannot in “good conscience” remain associated with an organization whose values, choices, or policies differ vastly from their own.

It could be argued that this tension is perceived largely because both parties involved (the individual and the Church) are working under the premises of the modernist identity paradigm which assumes that individuals have only One True Authentic Identity, just as there is only One Absolute Truth. This single “True” identity is fixed, exclusive, and exists independent of the context and one is obligated to present their “True” self to others regardless of the context or situation. To do otherwise would be to some extent deceptive and possibly unethical as well.

When the assumptions of a postmodern worldview are considered, though, it becomes apparent that this tension easily dissolves. As described above, the postmodern conception of identity assumes that people are simultaneously constituted of many “authentic” selves. We present ourselves differently depending on our context and company. This is not deceptive as we genuinely possess multiple and differing identities from which we may choose to operate at different times and places.

This idea is not foreign when we speak of racial or ethnic identities in contemporary Western society. We routinely talk of “biracial” or “multiethnic” identities. It is accepted as common and normal for some individuals to present an identity which draws on one ethnic heritage in one context but another in a different context. (This is called “code switching.”) Consider also that we routinely present different versions of ourselves in different contexts. Most of us do not behave identically when interacting with our children as we do with our spouse or significant other. Our friends and coworkers perceive us as a different “self” than do our siblings and parents. Each of them sees different versions of ourselves which are all part of our same “self” but also different at the same time.

In terms of our religious interactions, a postmodern Mormon might draw from a variety of religious, cultural, and philosophical identities either simultaneously or based on the situation and context to form his or her sense of “self.” They may find meaningful expression and community within Mormonism but also find meaningful expression in other religious traditions and/or communities as well. An individual may identify as 100% Mormon and 100% Catholic at the same time with absolutely no contradiction. Another might identify with strains of Mormonism but also aspects of Buddhism, elements of Islam, some assumptions of secular humanism, and/or bits of agnosticism or even atheism. Postmodernism argues that you can authentically be all, some, or none.

The tension described earlier can therefore dissolve as one rejects the “all or nothing” assumption of the modernist identity paradigm. A postmodern Mormon is free to identify with, honor, ignore, or reject the various parts of the Mormon tradition and identity that he or she chooses. This may help relieve the anxiety that someone might experience if they feel that in order to interact meaningfully with their Mormon community they are forced to accept “all or nothing” premise of their personal One True Religious Identity: that they either had to be “fully in” or “fully out.” Postmodernists would argue instead that we are free to actively shape, modify, and present our identities throughout our lives. Our identities, including religious identities, are dynamic and evolving, not static and fixed. We can proactively choose to “code switch” into one of our multiple authentic religious identities (perhaps a more TBM-ish Mormon identity) in contexts of interactions with our wards and families and then “code switch” into a different authentic religious identity in another context.