The Book of Mormon has long been considered to exhibit a degree of literary homogeneity that evinces its authorship as attributable to only one person.  As Alexander Campbell wrote in what is likely the earliest review of the Book of Mormon, published in his Millennial Harbinger of February 7, 1831:

The book professes to be written at intervals and by different persons during the long period of 1020 years. And yet for uniformity of style, there never was a book more evidently written by one set of fingers, nor more certainly conceived in one cranium since the first book appeared in human language, than this same book. If I could swear to any man’s voice, face or person, assuming different names, I could swear that this book was written by one man.

This paper challenges Campbell’s conclusion that the Book of Mormon was “more evidently written by one set of fingers” than any other book in history, and will focus on the Book of Mormon’s position on how to properly deal with the “hostile other.”

The Book of Mormon presents us with a “hostile other” early on in the narrative in the form of the Lamanites.  As a general rule, when the Lamanites are not openly attacking the Nephites, they are regrouping to plot their next attack.  How should the threat presented by the Lamanites be dealt with?

Instead of giving us a uniform mode of proper response to the “hostile other,” the Book of Mormon gives us three; each of which is set forth in an approving way, and each of which may be touted by those with similar views.

This fact came forcefully to my attention when I was asked to give a talk in sacrament meeting shortly after the 9/11 attacks.  I was very upset at the time.  Still am, I suppose.  I wanted blood for blood.  I was tired of all the talk about grieving.  I wanted some talk about kicking hell out of the enemy.  To whom did I turn as an example to support my ire?  Captain Moroni, of course.

Here was a Book of Mormon character I could get behind.  This should be the LDS response to the situation, I sermonized, not a bunch of namby-pamby limp-wristed talk about grieving.

I felt good about the talk I gave.  Judging from comments I received, others did, too.  It was only later that I realized how one-sided my presentation had been; that Captain Moroni was not the only person in the Book of Mormon to deal with a hostile enemy.

What about the sons of Mosiah?  Just like Captain Moroni, they faced a hostile and blood-thirsty enemy, an enemy that took every opportunity to murder unwary Nephites that fell into their clutches.  What did the sons of Mosiah do?  Did they cut up a cloak, write jingoistic slogans on it, and rally support for war?  As everybody knows, they did no such thing.  Instead, they split up and went into enemy territory, not to make war or seek revenge, but to preach the gospel.  They ended up getting maltreated, beat up, imprisoned, almost killed; but through humility and a one-on-one outreach program, they ended up building bridges of friendship with many of the Lamanites.

When I thought about the sons of Mosiah after giving my fire-breathing sacrament meeting talk, I felt ashamed.  I had missed an opportunity; an opportunity to contextualize in modern society what it was the sons of Mosiah actually did.  It is one thing to say they went off to teach the gospel to the Lamanites.  It is another thing to say that the modern equivalent would be for four upper 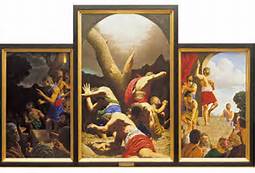 class Mormon boys to drop their good times and high living and fly over to the Middle East to teach the gospel to Al-Qaeda.  I mean, you’d have to be crazy to do something like that.  And a real world context puts in sharp relief just how insane their little plan was.  No wonder everybody laughed at them.  Most Mormons would, too.

I began to see that the Book of Mormon gave two completely different responses to the “hostile other,” both of which are described approvingly and both of which could be cited to for support by somebody with a similar viewpoint.

It was only later I saw a third such example—the people of Anti-Nephi-Lehi.  I think pretty much everybody knows their story; how they refused to fight against the invading “hostile other,” and instead accepted brutal death rather than engage in warfare or even defend themselves.  I haven’t done a statistical analysis, but I would wager Captain Moroni gets mentioned at least ten times more often than the people of Anti-Nephi-Lehi.  And yet they are there, in the Book of Mormon, and so is their story; diametrically opposed to that of Captain of Moroni’s response, and yet appearing in the same book of Alma scant chapters before.

What are we to make of this?  When we face a “hostile other,” should be fight them with everything we’ve got until they beg for mercy?  Should we preach the gospel to them?  Should we kneel down before them and let them kill us without even defending ourselves? 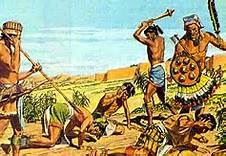 The answer the Book of Mormon gives to each of these questions is a resounding “Yes.”  But how can that be?  Isn’t that contradictory?  Yes, it is.  And because it is contradictory, the Book of Mormon sounds less and less like Alexander Campbell’s conclusion that, [F]or uniformity of style, there never was a book more evidently written by one set of fingers, nor more certainly conceived in one cranium since the first book appeared in human language, than this same book.

Could one man have written these different viewpoints and included them in the Book of Mormon?  Certainly.  But we are leaving behind the overly simplified narrative envisioned by Alexander Campbell, and venturing into the territory of great literature.

It has been maintained that truly great works of literature tend not to be homogeneous, but persuasively present alternate viewpoints on the same issue.  As Walter Kaufmann put it in his introduction to his 1961 translation of Faust in comparing Goethe with Kafka:

Assuredly, Goethe was very different from Kafka in a multitude of ways.  But Kafka reminds us that ambiguity and the irreducibility of a literary work to one interpretation may be virtues rather than defects, compatible with literary excellence and in part responsible for the haunting quality that invites constant rereading.

Marjorie Garber expressed a similar sentiment in her encyclopedic 2004 work, “Shakespeare After All,” in a comment specifically addressing The Merchant of Venice, where she writes that “the ambivalence and ambiguity that emerge from a reading or staging of the play are not a sign of its failure, but rather of its signal success.” (p. 283)

Goethe, Kafka and Shakespeare are not literary lightweights. 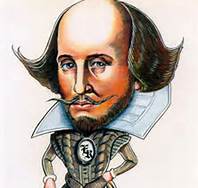 But it appears that, at least in this regard, the Book of Mormon reads more like these grand masters and less like Fun with Dick and Jane .