Moroni’s Promise is Not About the Book of Mormon 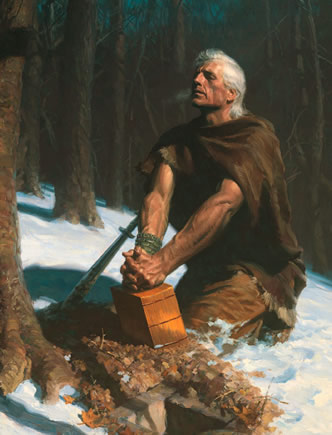 I was having a conversation with a friend about how doctrine changes in the Church. I made the claim that a form of the trinity is taught in the Book of Mormon, most clearly evident in Abinadi’s teachings. He told me that that isn’t possible, because he knows that our view of the Godhead must be right, and that the Book of Mormon is true. He said that he prayed to know that the Book of Mormon is true and received confirmation that it is, and therefore Abinadi could not preach something that is false. What does it mean to pray if a “book” is true? Does that mean every sermon is true? Every verse? Every line? What did Moroni mean when he said to pray if “these things” are true?

Moroni 10:  3 Behold, I would exhort you that when ye shall read these things, if it be wisdom in God that ye should read them, that ye would remember how merciful the Lord hath been unto the children of men, from the creation of Adam even down until the time that ye shall receive these things, and ponder it in your hearts. 4 And when ye shall receive these things, I would exhort you that ye would ask God, the Eternal Father, in the name of Christ, if these things are not true; and if ye shall ask with a sincere heart, with real intent, having faith in Christ, he will manifest the truth of it unto you, by the power of the Holy Ghost.  5 And by the power of the Holy Ghost ye may know the truth of all things. 6 And whatsoever thing is good is just and true; wherefore, nothing that is good denieth the Christ, but acknowledgeth that he is.

I’ll describe this in a different way. Let’s say that we prayed if our leaders are inspired of God to lead his Church and received a confirmation that they are. Would that mean that every word that they speak is inspired? We are told repeatedly that Church leaders make mistakes. Even if we could pray to know if a book as a whole is somehow true, that wouldn’t mean that every statement in it is. We still have the obligation to gain a testimony of individual principles. The answer might even be that some of them are wrong or poorly explained.

Moroni and his father Mormon did want us to believe that their words were true, but not so we could simply believe in the book. Believing in a book doesn’t do us any good. Gaining a testimony of the Book of Mormon becomes a weird abstract concept in that sense. Why must we believe in a book? Is God worried about what books we believe or the messages that are contained in them? And more than the importance of the message is what we do after hearing it. Which is why Moroni ends the book by asking us to do something: pray to know that you should follow the instructions in the book. “Therefore repent, and be baptized in the name of Jesus, and lay hold upon the gospel of Christ, which shall be set before you, not only in this record but also in the record which shall come unto the Gentiles from the Jews, which record shall come from the Gentiles unto you” Mormon 7:8. The message is to repent, be baptized, and follow the gospel of Christ. The first step is to believe that Christ is the way and we do that by praying to know that. That is Moroni’s Promise, that we can know that this is the correct path, and that Christ is the way.