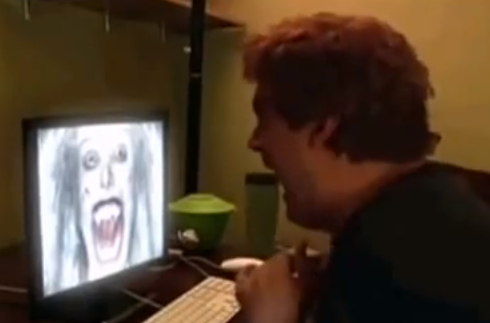 When was the last time you heard someone tell a “real-life” ghost story in church? I can’t remember the last time, personally. Maybe I live in a boring ward. It seems that even though ghosts are a plausible part of our religious worldview, secular culture has had enough of an effect on us that we’d be more likely to send someone who talks about seeing them to the therapist than to the bishop.

However, we do still tell stories about what scares us most. And, interestingly, we use the same story forms to tell them as the ones we used to tell ghost stories. Let me give you some examples.

The next time you’re in church and hear a talk or class discussion about the evils of pornography, listen to the way the stories are constructed. They involve a haunted object (usually a computer) on which diabolical shapes appear. Through these images on this glowing screen, the viewer is slowly changed, as if an evil spirit is seeping into the viewer’s eyes. Someone who was once a contributing member of the community, a stable spouse, and an attentive parent becomes possessed. Even if they look the same outwardly, they are infested.

In other words, Poltergeist.

We hear a similar story when we’re told about Mormons who listened to “alternate voices” or read uncorrelated material online. Again, the person is infiltrated by an evil spirit through a glowing screen. But this time, the possession is often more evident. The evil spirit that has entered the person wants to enter other people as well. Following its urgings, the person becomes goes out looking for others to infect.

In other words, a zombie story.

But now let’s look at that same story from the “infected’s” point of view. Sources they once trusted completely—Joseph Smith, the current prophet, the apostles, Church manuals, institute teachers—are suddenly unmasked as monsters, holding millions in their thrall. And they are horrified to realize that many of their loved ones are still under the monsters’ spell. Since they are the only ones who can truly see what’s going on, they must spread the word!

In other words, They Live (that Roddy Piper movie where a pair of sunglasses gives the protagonist the ability to see that aliens have taken over the planet).

In an earlier age, before antibiotics, vaccinations, and accessible health care, ghost stories expressed our fear of early death. But it seems that Mormons (at least those in first-world countries) are not as afraid of death—or the dead—as they are of pornography and apostasy. Those are our latter-day ghosts.