Mormon Women Have Their Say – A Book Review 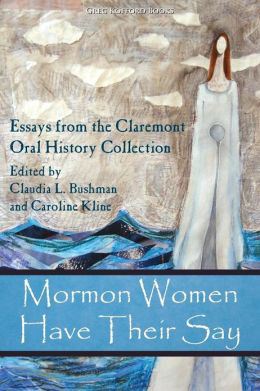 Mormon Women Have Their Say

The book “Mormon Women Have Their Say” stands to be an influential book on a topic of increasing importance to Latter-day Saints and society in general. It’s safe to say that only rarely does the general public listen to the voices of religious women. And when they do it is usually only through select channels—the disenfranchised or a feminist interpretation. Representations of women from a large religion like Islam are no more immune to this bias than those from a smaller religion like The Church of Jesus Christ of Latter Day Saints. Millions of faithful, dedicated women of these religions function in society and accomplish amazing things, yet their stories are so often missed or misunderstood. How do they balance religion, morality and life in a world where their views are often underrepresented? Speaking as one of them, the balancing act is not trivial and sometimes we are successful and sometimes we fail—but either way, it is ourstory, and some of the richness of our lives comes through in this book.

When reading the description of the book, I found myself expecting mainly a collection of Mormon women’s stories that had been complied together in themes, but the book is not exactly that. Rather, it is a compilation of essays (one per chapter), written by different historians, on different aspects of the LDS church. The essayists use the stories of these women to support or explain views and positions of the Mormon church, with emphasis on those issues most pertinent to its women. Each historian does a thorough job referencing outside sources, and the references themselves are often worth a read.

In some essays the stories of the Mormon women are the highlight and make up a large portion of the chapter. In other essays, they are not as prominent and you hear more from the historian writing the chapter. I found myself wondering if the book would not be more appropriately entitled something like “Oral Historians Have Their Say About the Mormon Women Histories They Collected.” For me personally, I appreciate the chapters where the stories are allowed to speak with less interpretation from the historians.

The historians each adopted a slightly different tone in their chapters. Though subtle, their objectiveness varied somewhat. In the conclusion of her chapter “Missions”, Pulido offers a suggestion to Mormon women: “Perhaps feminist theologian Rosemary Ruether has some good advice for Mormon mothers on the topic of parenting children who will hopefully participate in God’s work one day….” (pg 189) Contrast that with this statement from Clayton in her chapter “Revelation” : “I do not question the reality of these women’s claims to divine revelation. There is no need to judge whether these communications are in fact from a loving and interested divine being. It is enough that these women believe the answers came from God.” (pg 151). While Pulido’s advice is interesting, I feel that the “giving” of advice contradicts both the stated purpose of the book and the general idea that the scholars are finally giving Mormon women their say. Whether they wanted it or not, any Mormon woman will assure you they have been “given” an abundance of advice, but Mormon women have rarely been given a voice or understanding. The majority of the book is objective and well written. There are hints occasionally through the book of an author’s personal point of view, but they are limited.

The book opens with the chapter “Self and Other,” in which Kline suggests a new paradigm, developed by Saiving and later Hoagland, for properly assessing pride and selfishness in women. It emphasizes the differences in which women work through issues of pride and selfishness over the traditionally used view of pride and selfishness that applies better to men. In my opinion this is the best chapter in the book. I was nodding my head mentally with every sentence, and I came to better understand myself and my own thinking. Each reader will likely have a favorite chapter that resonates more with them. At risk of listing nearly all the chapters, I greatly enjoyed “Singlehood”, “Fertility”, “Motherhood”, “Revelation”, “Prop 8”, “Agency”, “Adversity” and “Callings”. I struggled a little with the chapter “Womanliness”. It was heavy on quotes from the male leaders in the Mormon Church to establish what they consider womanliness to be rather than letting us, the Mormon women, define “womanliness”. The first part of “Heavenly Mother” also felt a little forced. The concept of Heavenly Mother is different from traditional goddess worship, and the author spent a lot of time explaining goddess worship only to flip and tell the reader that it doesn’t really apply. The chapter is still very interesting, though.

Not surprisingly, the real gems of the book are the stories from the Mormon women themselves. They are superb. I relate in some way to every single woman quoted in the book. The most intriguing part was seeing the thoughts and reasoning behind decisions made by these women. There is no doubt that by nature of being both a woman and a Mormon, women in the LDS Church adopt a reserved public persona where they generally avoid conflict and giving offense to others. However, I have found that if you remove a Mormon woman just one step from this public setting, the floodgates open to reveal a woman with deep, emotional, well reasoned, and rational thoughts. This is evident throughout the book. From one of the women, Laura:

About the time I was in my early thirties I remember questioning for the first time, “was this all I was meant to do?” ….I had to dig deep and go back to what I had felt when I made those decisions. I really felt it had nothing to do with the Church or with my husband, it came from me…I wasn’t being true to it by not recognizing that choice. That didn’t make my life completely easier, I still felt inadequate at times, but I didn’t feel useless for being a woman anymore. I just needed to adjust and find my strengths within what I wanted. I couldn’t rely on an outside source to give me commendation. (pg 17)

Laura’s trials and thoughts show a journey that many LDS women take. I also appreciated this lovely story from Joanne about how her mother participated in blessing her:

Joanne, and the example of her mother, show ways in which Mormon women demonstrate their power and influence. I enjoyed seeing the faith and ability of the women to adjust and deal with the complex and deep issues found within the Mormon church.

In her excellent introduction, Claudia Bushman, details the guidelines established and the efforts made to facilitate an unbiased recording of these oral histories. I feel the book succeeds as an objective recording of Mormon women narratives. Members of the LDS Church can pick up this book and see a timely evaluation of Church issues. Men and women alike can also find in it kinship, understanding, and a greater appreciation for how varied, bright and thoughtful the women in the Church are. If you are not a member of the Mormon Church, pick up this book and discover an intellectual read and to appreciate that Mormon women are much like women everywhere—unique, diverse, independent, accomplished and kind.