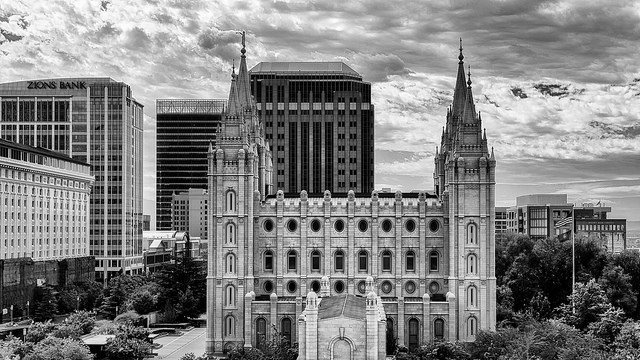 The other day I was listening to a podcast about Mormonism when the host made the claim that it doesn’t matter whether the Church’s claims are true and that instead what matters is whether Mormonism is beautiful and good.

It’s a viewpoint I’ve encountered many times before, and in one sense it’s perfectly reasonable. None of us will look back at the end of our life and think, “You know, I had profound spiritual experiences and I did a lot of good in my community, but I really regret not spending more time researching religious trivia and arguing about it online.” Stuffing our heads with historical facts won’t matter much on our deathbeds.

And yet the search for truth is essential, and it’s essential precisely because of the implications the truth has for beauty and goodness. Put simply, what we believe to be true profoundly affects our spiritual health and how we treat each other.

As proof, let’s look at three examples within Mormonism.

The Bible is full of stories about a vengeful God — one who burns down whole cities for ignoring the poor, turns a woman into a pillar of salt for looking back, floods the entire planet, and so much more.

If we believe that God operates this way, we inhabit a cruel worldview. We blame people when bad things happen to them, thinking it’s a sign they did something immoral. We see the tsunami that hit Sri Lanka, and we think it was caused by this vengeful God. We hear of someone getting in a car wreck and we start imagining what they did wrong morally, looking to blame them.

And yet the truth is that bad things have always happened without the intervention of God. For instance, many biblical scholars and scientists have pointed out that the plagues of Egypt could easily have had natural causes. They likely have started with a bloom of red algae in the Nile that made the water look like blood, killed the fish, and sent the frogs up on land. Then, when the frogs died because there was no water for them, their bodies were eaten by flies and mosquitos, which in turn may have given diseases to the cows, which may have given boils and sores to everyone in the area, and so on…

It makes sense why people in ancient civilization would have seen such events as a sign from God, but it makes far less sense today with the tools of modern science. We can look back through the Bible and see story after story that can easily be explained in scientific terms, and we therefore no longer need to hold to the ancient explanation that God is eagerly awaiting the physical destruction of his children when they step out of line.

The benefit of this new worldview is that we, too, are less vengeful, less anxious about piecing together who is evil and who isn’t based on natural events. We can stop judging people for what happens to them and instead have compassion for them in a hard world.

Many Mormons used to believe (and some sadly still might) that dark skin is a curse from God. The Book of Mormon declares as much, saying that God cursed the descendants of Laman and Lemuel with “a skin of blackness.” This idea mirrors what many religious believers in the early United States (including the Mormons) thought about the mark of Cain — that it was a curse of dark skin.

I’m embarrassed to admit I unthinkingly believed these stories in my youth.

However, the first time I looked at a map that tracked skin color across the world, I immediately recognized that my prior, superstitious views about skin color were wrong. 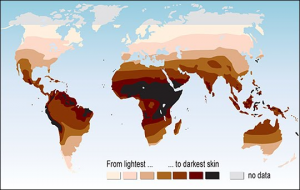 That is, I saw that there’s clearly a correlation between skin color and sun exposure. And once I learned about melanin and the history of human skin color I better understood that there were perfectly natural explanations for people why people’s skin looked so different. I changed my mind in light of new evidence — in light of a position that’s closer to the truth.

This, of course, isn’t just a matter of intellectual improvement. If you believe that God causes people’s skin to get lighter when they’re righteous and darker when they’re unrighteous, then you can’t help but think less of people with dark skin. There’s no other word for that than racism. And racist thoughts can’t help but spill over into how we treat each other day to day.

Many Mormons also used to believe (and, again, some still do) that homosexuality was a choice — a struggle to overcome. For instance, President Spencer W. Kimball said in 1971 that “homosexuality can be cured if the battle is well organized and pursued vigorously and continuously.”

I too, once believed this. Even as recently as 2008 I was avidly fighting for Prop 8 because I believed homosexuality was a choice. It was only once I learned how frequently homosexuality appears in nature and how tied it is to biology that I changed my views. For me the revelation came while reading Middlesex, a Pulitzer Prize-winning novel about a intersex man. The novel addresses the science behind sexuality and simultaneously sparked empathy for the protagonist, and this in turn made me realize how wrong my prior position had been. I came to see that sexuality was tied to biology and that the truth was different than I’d previously believed, despite the claims of church leaders.

As a result of this shift, I no longer feel the urge to tell people that they can change their biology. Instead, I accept their biology and feel love for them and what they add to the world.

I’ve highlighted just a handful of examples here, and yet there are so many more. In short, there’s often no way to separate a true worldview from a worldview that’s full of beauty and goodness. This isn’t to say that academics are necessarily kinder or more compassionate as a result of their work since they may get puffed up in pondering how smart they are or become fixated on triviality. But generally speaking when truth seekers discover more about how the world actually works, it points all of us toward a more inclusive and expansive worldview — one that gives place to all of humanity.

This is why Mormon truth claims matter, especially in conjunction with a pursuit of beauty and goodness. All three of these ideals — truth, beauty, and goodness — are essential for living a quality life. We can’t ignore any one of them if we want to draw closer to the divine.

Jon Ogden is the author of When Mormons Doubt: A Way to Save Relationships and Seek a Quality Life, a book that helps bridge the divide between those who believe and those who no longer believe.

Jon received his master's degree in writing and rhetoric from BYU.

All posts by Jon Ogden