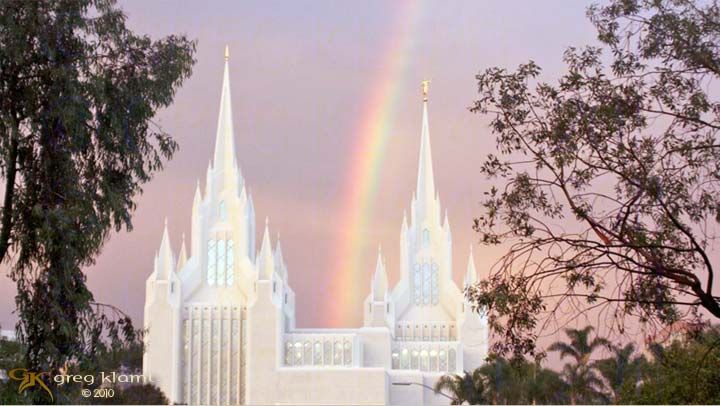 With the advent of June comes LGBT pride month. It’s a time of celebration, of scantily clad bodies, of liberation, and of rainbows. This tradition has penetrated even into the heart of Mormondom, so that the spires of the great Salt Lake Temple can observe the variegated throng below. In light of this wary meeting between two very different cultures, I would like to engage in some deliberate syncretism, where symbols and ideas from different traditions mingle and change. I’d like to speak on our shared symbol of the rainbow.

It’s a rather persistent symbol. In Norse mythology, the rainbow was called the Bifröst, a bridge built to connect Asgard to Midgard, the gods to the mortals. In Greek mythology the rainbow was the train of Iris, messenger of the gods. In either case it was an expression of the divine, a communication with their mortal followers.

For our Judeo-Christian God, the rainbow was created as a token between God and the entire earth after the great Flood:

The waters shall no more become a flood to destroy all flesh. And the bow shall be in the cloud; and I will look upon it, that I may remember the everlasting covenant between God and every living creature of all flesh that is upon the earth. (Genesis 9:15–16)

Interestingly enough, the rainbow was as much to remind God of the covenant as it was for his children. He had destroyed all living creatures in an awesome display of divine wrath, over which he had also wept (Moses 7:32–37). The rainbow serves as a covenant reminder to the Lord that he will be more patient with human foibles, a physical manifestation of his grace. Even from the beginning the rainbow was a sign of tolerance and preservation. Joseph Smith taught something similar for the rainbow’s significance:

I have asked of the Lord concerning His coming; and while asking the Lord, He gave a sign and said, ‘In the days of Noah I set a bow in the heavens as a sign and token that in any year that the bow should be seen the Lord would not come; but there should be seed time and harvest during that year: but whenever you see the bow withdrawn, it shall be a token that there shall be famine, pestilence, and great distress among the nations, and that the coming of the Messiah is not far distant.

Thus the rainbow remains a token of preservation, that God’s mercy yet outweighs his wrath. I find it serendipitous (or perhaps inspired) that the queer community, who for so long was without a home and a Protector, now gathers under the auspices of this symbol of universal protection, which God made with “every living creature of all flesh that is upon the earth.”

When we delve into the physics of rainbows, we remember that they are pure light. Sunlight refracts through rain droplets, which act as thousands of small prisms, splitting the light into its component wavelengths. Thus what seemed to be uniform light is revealed as breathtakingly diverse.

We would also do well to remember that every human soul is heir to the Light of Christ, “the divine energy, power, or influence that proceeds from God through Christ and gives life and light to all things.” It is a potent source for good in the world. I believe, though, that as it refracts through human prisms, it too manifests in divinely diverse ways. We are all recipients of spiritual gifts, though not all our gifts are the same (D&C 46: 10–11). While we are all children of God, we come in shades of royal reds, soothing blues, and fecund greens. The rainbow shows the inherent diversity of the children of light (1 Thess. 5:5). We are frequently taught in the Gospel of the importance of working together, where our differences become strengths in the unity of the Church as we employ our talents (1 Cor. 12; Matt 25:14–30; Come, Join with Us). The key is to embrace the light God has placed in each of us and let it shine (Matt 5:13–14). The pride flag is a reminder that no matter our color in the rainbow, we are all manifestations of light.

It was this same principle that inspired Craig Schoonmaker to name the annual LGBT celebrations Pride Parades:

Anybody can have pride in themselves. That will make them happier as people . . . This is not that kind of [sinful] pridefulness. It’s more like self-esteem . . . The point of it was shame, and the antidote to that is pride.

This pride in ourselves, pride in an identity that is inherently good, has long been taught by modern day prophets, including President Gordon B. Hinckley:

Believe in yourself, my brothers and sisters. You are a child of God. You do have something of divinity within you. Believe in your capacity to do great and good things.

This capacity and identity extends even into eternity. Most are familiar with the legend of the pot of gold at the end of the rainbow. As a child I always wanted my mother to drive me to this liminal space, to see where the earth would shimmer with celestial colors. I soon learned, though, that rainbows have no end. All rainbows are circular, and they only appear as bows because a part is hidden beyond the horizon. They reflect another teaching of Joseph Smith:

“… I take my ring from my finger and liken it unto the mind of man—the immortal part, because it had no beginning. Suppose you cut it in two; then it has a beginning and an end; but join it again, and it continues one eternal round. So with the spirit of man. As the Lord liveth, if it had a beginning, it will have an end.

And that light comes in so many different shapes. When Gilbert Baker first designed the Pride flag in 1978, he assigned meaning to each of the eight colors. The remaining six colors in the current Pride flag symbolize life, healing, sunlight, nature, harmony, and spirit. Surely these are virtuous, lovely, and praiseworthy things we should seek after (AoF 13).

Yet I think that my favorite symbolic use of the rainbow remains its power to bridge heaven and earth and allow communication between God and his children. It is a reaching out in an expression of God’s beauty across the void which separates us. And the rainbows at Pride are that same reaching out, from one child of God to another. It is the desire of the queer community to connect with the rest of humanity as equals, to bare their souls—and a good deal of skin—in an effort to form bonds that can last eternally. Let us remember “that same sociality which exists among us here will exist among us there, only it will be coupled with eternal glory, which glory we do not now enjoy” (D&C 130:2). We often associate this verse with the sealing of men and women in the temple, but sociality encompasses far more than marital relationships. While our current doctrine may designate marriage as between a man and a woman, all our associations can become divine. Siblinghood, friendships, mentorships, and perhaps even queer love may all find room in heaven.

Rainbows, then, are a symbol which Mormons and the queer community share. They are common ground and an opportunity to connect despite all our differences, perhaps because of our differences. At the heart of this tenuous but growing bond are queer Mormons themselves, people who are heir to both communities and navigate both worlds. Those who belong to this group, of which I myself am a part, are the rainbow. We are the bridge that can foster communication and understanding.

To close, I’d like to quote a very wise figure from my childhood: Kermit the Frog:

Why are there so many songs about rainbows and what’s on the other side? . . . Someday we’ll find it—the rainbow connection—the lovers, the dreamers, and me.

I dream of a day when we are no longer a people divided by faith and identities. I dream of a day where we are all recognized as glistening light, working together to form a harmonious unity before God. The rainbow connection, the common heritage that unites us all as divine siblings, will ultimately, lovingly, prevail.

David Delbar is a graduate student at Brigham Young University, pursuing a degree in Classical Studies. He frequently writes on the intersectionality of LGBTQ issues and the LDS faith on his blog Liminality-Mormon and Gay.

David Delbar is a graduate student at Brigham Young University, pursuing a degree in Classical Studies. He frequently writes on the intersectionality of LGBTQ issues and the LDS faith on his blog Liminality-Mormon and Gay.

All posts by David Delbar