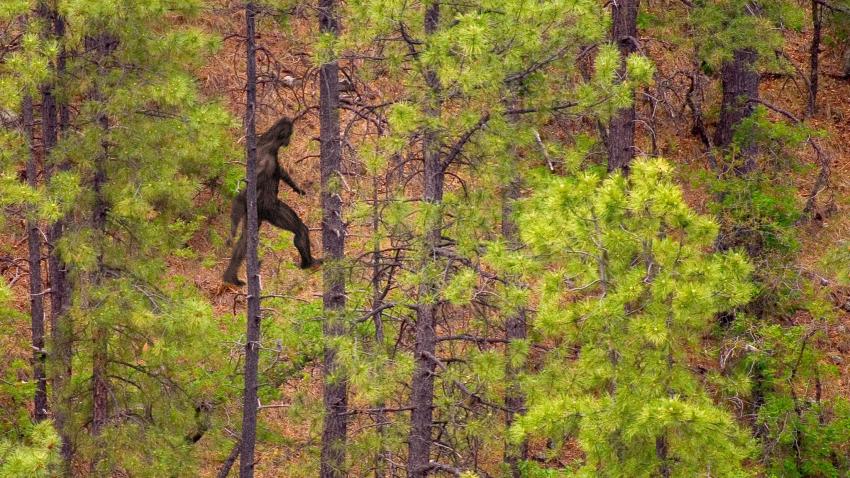 I couldn’t think of a better starting point for this series than the meeting of two great pieces of Americana: Mormonism and Bigfoot. The two are similar in a lot of ways; both seem to have taken deep roots in occult folklore. Some people claim to have seen Bigfoot rip the door off a Jeep; others have claimed that Mormons have horns growing under their hair. Both claims, we would hope, are fantastical. Where these two giants cross paths is of particular interest. As some Mormons were led to believe, Bigfoot is not actually a secluded wood ape from ages long forgotten, but is indeed Cain, the murderer of Abel and one who was supposedly cursed to walk the earth forever in his sins.

The origin of this story comes from a journal entry of original member of the quorum of the twelve, David W. Patten as reported by Lycurgus Wilson in a biography published in 1900:
As I was riding along the road on my mule I suddenly noticed a very strange personage walking beside me…. His head was about even with my shoulders as I sat in my saddle. He wore no clothing, but was covered with hair. His skin was very dark. I asked him where he dwelt and he replied that he had no home, that he was a wanderer in the earth and traveled to and fro. He said he was a very miserable creature, that he had earnestly sought death during his sojourn upon the earth, but that he could not die, and his mission was to destroy the souls of men. About the time he expressed himself thus, I rebuked him in the name of the Lord Jesus Christ and by virtue of the Holy Priesthood, and commanded him to go hence, and he immediately departed out of my sight….

It’s not hard to link the mysterious being that was covered in hair to the image of Bigfoot. And while at the time, most of the legends about Bigfoot were occurring in the Pacific Northwest of the United States, it would not be unheard of for the people at the time to be familiar with the stories. In fact stories of Bigfoot or a related creature can be found on every populated continent. What makes this account in particular so interesting is that it was included in Spencer W. Kimball’s book “The Miracle of Forgiveness”. Not only did it give this myth widespread awareness, it was published in 1969, just before the decade where Bigfoot hype would reach it’s fever pitch in the United States.

What the Scriptures say…

Scripturally, you would be hard pressed to find any evidence Cain survived the events of the Old Testament. As much as I enjoy the image of a Sasquatch floating on the waves of the great flood, muttering on and on about goody two shoes Abel, it probably didn’t happen that way. While LDS biblical cannon remains mute on the subject of Cain’s death an apocryphal source fills in the gap with not only Cain’s death, but how he was killed. The Book of Jasher includes a record of Lamech and how he, being very old and nearly blind, accidentally fires an arrow at Cain, who ironically appeared to be misidentified as an animal, and kills him (Jasher 2: 26-30). There are some instances in The Bible and Book of Mormon where the Lord grants immortality to certain people for specific reasons, but I don’t think it’s worth investigating because we are given no real indication that was the case here with Cain.

The story of Cain as Bigfoot still lingers on at best as folk doctrine. I can easily see the appeal of the idea though, a lone wanderer traveling the world inspiring the stories about the Sasquatch from continent to continent. There is something romantic and believable in that narrative. But despite being given a big shout out in one of the most popular LDS publications the idea really hasn’t caught on as doctrine. In fact just last year, The Miracle of Forgiveness was taken out of print; it turns out linking Cain to the Sasquatch was one of the least problematic things that came out of that book. It was probably lucky to have survived this long in the first place. As we will explore later with other leaders of the time, the account from David W. Patten came from a time where LDS leaders really didn’t have a filter about, well…much of anything. And a story like this would be put on ice by church PR well before it ever made it into an Ensign or conference talk. Unless next conference we hear about Elder Holland’s trip to Scotland where he rebukes the Loch Ness Monster as the disembodied spirits of Laman and Lemuel. Best conference ever.

With the abundant lack of scriptural and physical evidence for such a creature, it’s safe to put this myth to bed. We can’t say for sure who Patten encountered on the road that day (if anyone). It could have been a fur trapper, or the story may have been misinterpreted completely. Next time you go camping there should be no need to pack a priesthood holder for protection against close encounters of the Cain kind.

Anything I missed? Are there any Mormon myths you would like to see covered in future investigations? Let us know in the comments!