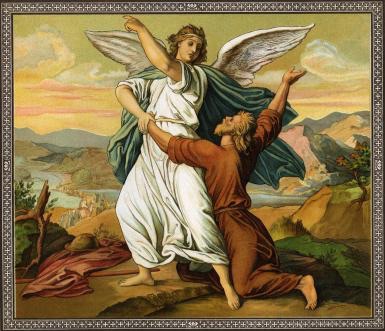 The early history of the Church of Jesus Christ of Latter-Day Saints is filled with inspiring stories of angelic visitations. Joseph Smith testified of appearances by Elijah, Moses, Noah, and the Apostle John. A golden statue of the Angel Moroni sits atop LDS temples to remind the faithful that Moroni appeared to Joseph Smith several times to instruct Smith on how to translate the Golden Plates into the Book of Mormon.

Another angelic visitation from the early days of the Church, according to official Church sources, occurred while Joseph Smith was struggling with “the Doctrine of Plural Marriage” and a command he had received to take on additional wives. (Journal of Discourses, Vol.20, p.28 – p.29) In an essay released by the church in 2014 on the LDS.org website, this angelic visitation was described as follows:

“Joseph told associates that an angel appeared to him three times between 1834 and 1842 and commanded him to proceed with plural marriage….During the…final appearance, the angel came with a drawn sword, threatening Joseph with destruction unless he went forward and obeyed the commandment fully.”

When releasing this recent essay, the Church rejected a unique opportunity to move away from the polygamy doctrine which has plagued it for nearly 200 years. It could have emphasized the statement Gordon B. Hinckley made in 1998, where he said that polygamy “was not doctrinal” Source The LDS Church could have moved away from the 132nd section of the Doctrine and Covenants saying that if Joseph had ‘ten virgins given unto him” it would not be adultery. The same section that threatens Emma Smith with destruction if she would not agree with Joseph marrying and, in many cases, having sexual relationships with other women.

Instead, the Church’s assertion that angels are occasionally sent by God to force men to obey His will presents the question: Why would God not only want Joseph to abandon his fidelity and loyalty to Emma in order to pursue and marry other women (including teenage girls and women who were married to other faithful men), but feel such actions to be imperative enough that He would send an angel threatening Joseph with destruction if he did not comply?

Could God have sent an angel, or an army of angels, to stop the recent kidnapping of girls by ISIS to prevent them from being placed in “Rape Camps” where they are brutally molested multiple times a day to provide pleasure for radical Islamic terrorists? Source

Mormon apologists will oppose my words by saying that God decides when to send his angels and to whom; and that His ways and purposes are higher than mine. In a church that is the great defender of “family values” and “traditional marriage,” why was the last recorded purpose an angel was sent to Earth to force a man to commit adultery, or at the very least, to demand the institution of a marriage relationship that is decidedly not monogamous nor supportive of healthy, intimate relationships?

Being raised in the LDS Church has taught me many great things, including; “Wherefore you are left to inquire for yourself….and ponder these things which you have received” (D&C 30:3). And, “by the power of the Holy Ghost ye may know the truth of all things (Moroni 10:5)”

I cannot believe that a loving God would send an angel to force his prophet to secretly cheat on his wife and take other men’s wives. It is even more repulsive to me that Joseph Smith would use the same story and his position of authority to threaten the salvation of not only a teenage girl, but her family, in order to force her into a marriage. Source

I have pondered and prayed about the story of The Angel and His Sword enough that I know that this will never make me feel good, no matter how long I consider it.