MORMONAD: THE DEVIL MADE ME DO IT 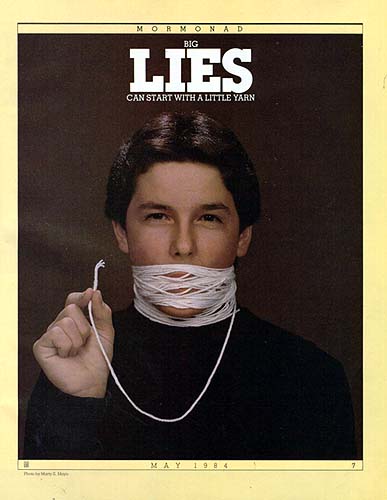 MORMONAD:  THE DEVIL MADE ME DO IT

Soon after joining Young Women’s we were told that we were going to be making a video version of the Mormonads with the young men in our ward. I didn’t know what those were and so I asked my mom and dad.  They told me they were posters that the Church made back when they were teens that had a little saying to remind the youth to be good. I was super excited! I love making funny videos with my little sister and thought this would be the perfect chance to show my sweet skills.

I was chosen to be the script writer and I was happy with that because I could decide what would happen in the video . It took forever to write! I had to make sure it was spiritual, and that it had some Barker humor in it (if you know what I mean).   I brought my script to church the next Sunday. When the final changes were made by my Young Women’s leaders, I was a little upset for two reasons:

My mom and dad really like what I wrote and suggested that I could put it on their blog as a post.  I was really excited to do this. The following is my original script.  Look out  Steven Spielberg!  Okay, maybe he doesn’t have to worry about me.

The first scene opens with the two COG’s (Child of God) at home hanging out and not studying for a big test. The next day they go to high school and are taking the test.

Teacher: Now, I want to remind everyone, NO cheating on this test. I hope everyone studied last night like they were supposed to. (All the students nod their heads)

First COG: (Thinking to himself) Oh no! I totally forgot to study last night!

Second COG: Dang it! I was at Ethan’s house last night eating that cookie. Mmm, that was a really good cookie. (While this is happening the teacher is passing out papers and the Holy Ghost appears)

Satan: It sounds like someone is saying bad things about me, who is the most fun one on earth! Me, of course. Right guys?! Now here’s what I need you two to do. You didn’t study last night, right? But you really deserve an A+ on this test. Just look off someone else’s paper, it’s as easy as that!

Holy Ghost: No don’t cheat on that test! You didn’t study last night, you need to suffer the consequences. And… (Satan pushes Holy Ghost off screen)

Satan: Don’t listen to her! It’s just one little test. Just do what I say and you’ll be fine!

Both COGs: If you say so. (They shrug their shoulders and look at another person’s paper)

Satan: Nice guys! You’re doing great! (Satan puts a cord around each of them)

Satan: Just think of it as a cord for us to make friendship bracelets after school. I have to go; I need to go and ruin someone else’s li… I mean help more people! Bye guys.

First COG: How much is this game?

First COG: Dang it! I only have thirty dollars!

Second COG: Hey! Look at those guys over there; maybe they can show us a cool game.

First COG: Yeah, video game nerds know about all the good games! (They walk over to the nerds)

First nerd: It’s that game right there! (He looks up and points, then looks back down at the screen)  Dang it; you made me die!

Satan: Hey guys, it’s me again! Did you miss me?

Second COG: Actually we were wondering if you could help us, this game is too expensive for us. (Holy Ghost comes in panting and out of breath)

Holy Ghost: (Looks at Satan) You meant to push me off that cliff!

Satan: I said it was an accident.

Holy Ghost: (Rolls eyes) Now you two remember… hey what’s that on your wrist? You were supposed to listen to me, not Satan!

First COG: She said it was a cord for making friendship bracelets after school!

Holy Ghost: If you repent, that cord can be removed. Satan was lying; you’re not making bracelets!

Satan: Hey I don’t lie! (Pushes Holy Ghost off screen) I mean seriously, show me a little love; I never got a body like everyone else.

Holy Ghost: (Yells from far away) That was your own fault!

Satan:  All right, now back to you two. You don’t have enough money for that game, which you clearly deserve! All you have to do is stuff it under your shirt, and take it! Super easy!

Second COG: Are you sure about this?

Satan: Of coarse I am. No one will see you doing it; those nerds are too busy with their game, and the clerk is too busy…. (Clerk is taking selfies) um… taking selfies.

First COG: All right. (Puts game up his shirt and quickly walks out.)

Satan: Nice. Oh guys, I have some more friendship bracelet cord, only this time its thicker, like rope! (Satan walks out)

Next scene:  It’s late at night and the boys are taking a walk.

Second COG: I asked my mom if she could help pay for a car but she said no! Even though I passed my driver’s exam!

First COG: Hey, maybe Satan or the Holy Ghost can help us.

Second COG: I would rather have Satan help us; that way we can get what we want without having to work for it. (Satan comes)

Satan: So, you finally show your appreciation. (Satan starts crying)
You’re like the boys I never had! (Satan hugs them)

Second COG: I wish you were my mom, that way you might buy me a car.

Satan: Easy, peasy. Why buy one when you can steal one? (Satan points at a car) That car is unlocked with the keys in it. Go steal it. (Holy ghost comes wearing slippers and yawning)

Holy Ghost: Satan, I wish you weren’t evil 24/7; I need my beauty sleep! Now boys it looks like you haven’t been able to hear me very well lately, and you haven’t repented for the mistakes you’ve made. But you need to do the right thing even when it’s hard, so I trust that you two will make the right decision now.

First and second COG together: I think we should steal the car.

Holy Ghost: WHAT! But I…( Satan puts duct tape on the Holy Ghosts mouth and pushes her away as she’s trying to talk)

Satan: Good choice! (gives an evil smile) Now go get em’ tiger. (The boys get in the car and drive away)

Satan: There’s just one more thing. (Satan puts a chain around each of them)

First COG: Hey you tricked us! We were never going to make friendship bracelets!

Satan: Sorry, but not really; I forgot to write it down in my day planner. (Police sirens in back ground)

First COG: Satan! This car is car bait! Help us!

Satan: I don’t help people, I just make lives worse, you two are on your own. (Satan disappears)

Cop: Step out of the vehicle with your hands up! (They do so)

Second COG: Satan made us steal the car!

Holy Ghost: Actually, Satan didn’t make you, he tempted you; you had the choice to do the right thing, but you chose not to. (The two COG’s get into the police car)

Second COG: I feel really bad; we should have listened to the Holy Ghost, but she wasn’t around much after we started making bad decisions. I want to feel the spirit again. We need to repent.

First COG: I know there will be consequences for what we’ve done but I also know that we can be forgiven if we go through the repentance process. (They bow there heads and pray – then the chains fall off)

Holy Ghost: Jesus Christ atoned for your sins so you won’t be bound by Satan if you repent. Remember, Jesus loves you and wants you to live with him again. Please listen to me and I’ll help you get there.

All posts by Milayna Barker