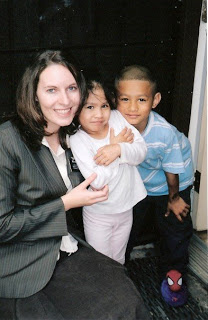 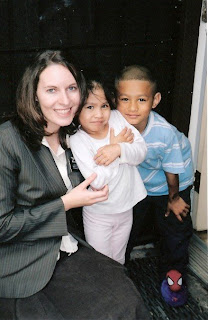 He also told me tale after tale of his own mission adventures when I was growing up, and offered me encouraging words each time I gave a Sacrament Meeting talk or Family Home Evening lesson. Most often they fell along the lines of, “I don’t know if you want to be a missionary, but if you do, you will be a great one.”

They were perfect for me, balancing between gently prompting and letting-me-decide-for-myself. In the end, I did want to go on a mission, even though I had other adults (including one brother, one Young Woman president, and one bishop) essentially, if not explicitly, tell me that missions were “only for boys, and girls should get married instead.”
I have written a bit about this before, and how when I got to the mission field in California, I was faced with new doubts. Did I have the same authority to preach the gospel as the (much more numerous) young men? I was not given the same opportunities for leadership as they. Nor was I ordained to the priesthood, which meant that I was unable to baptize, confirm, or give blessings of healing to those I taught.

And nearly every night of my mission, a man younger than I would call my companion and I, often asking us about our day, and our goals,* and if they could do anything for us. That last point was particularly frustrating for me, because we usually did need help. And we recognized it. But we never knew what to say when the well-meaning Elder (or Elders) asked us: they couldn’t go on exchanges with us like they could with the male missionaries.

I dreamed of going on exchanges with other sisters in my mission, especially when I was brand new. I remember asking my trainer about some of the things she did, including her door approach. I simply wanted to know if the way she did things was the way we had to do things, or if it was just the way that was comfortable for her (which happened to be the way that was uncomfortable for me). Unfortunately, she interpreted my questions requesting her to distinguish between mission rules and personal preferences to suggest that I didn’t trust her, so it did not go over well. What I would have given during those moments to see the way another missionary, any other missionary, did things.

Then after my second and a half transfer (when my much loved second companion went back to Temple Square), I was the trainer. And forever after that, the “senior companion.” Even in that position, I longed for additional examples. They didn’t come, with one exception. My Mission President’s wife requested to go on teaching visits with my companion and I, while the President was otherwise engaged. It was remarkable. We learned from her wisdom, and saw that she was not afraid. We also delighted in her delight, and felt again that missionary work can be fun.

Nearly as fun was receiving letters from my second companion, who on her return to Temple Square was immediately made an Assistant to the President. My own experiences with her taught me two things, 1) that she would be a phenomenal Assistant, and 2) that there was another way. Sister missionaries could lead and serve–in many of the same ways as men.

Now, whenever changes are announced having direct bearing on sister missionaries, I think both to the future, and all of the missionaries that will be affected by it, as well as to the past, and my own mission. How would it have influenced it? And with the most recent changes, including last October’s lowering of ages, as well as Friday evening’s announcement about new leadership opportunities for sisters, the answer is always, “It would have made it better. Significantly better.” And so, after reading that sisters will soon have leadership roles extending beyond senior companion and trainer and that they will (literally) have a seat at the missions new Mission Leadership Councils, I felt happy and sad at the same time (though it should be noted: more happy than sad.)

I rejoice for the full-time sister missionaries currently serving (who are also lucky enough to not have to wear nylons!), and for all of the sister missionaries who will serve. This is a small change, but it will have big consequences, and they will be felt by those who are serving in tangible ways. Fewer sisters will have their longing for additional examples go unanswered. There will be someone who can call them, and ask, “How can I help you?” and be given a real answer: “You can teach with me. You can meet this investigator we are working with. You can advise me on what we should do,” thus solving a lot of the frustrations I felt on a daily, weekly, and monthly basis. So I rejoice that there will be (at least some) leadership positions for sisters in every single mission, all over the world, and that sisters will be given opportunities to go on exchanges with other sisters.

I rejoice that Mission Presidents’ wives will have more involvement in the lives and work of the sister missionaries. There seems to be a lot of wisdom in this. One of the greatest joys of my mission is my association with my president’s wife (who I still have the good fortune to see, from time to time). I would have loved to have benefited even more concretely from her presence and example.

On the other hand, I mourn that this change did not come sooner, in my time, and in the time of many of those whom I care about. I also mourn that it required the entrance of record numbers of sisters for leaders to consider utilizing their skills. It seems possible to me that this (happy) conclusion might have benefited sisters even more previously, when there numbers were so small, simply because that often translated into less support.

I also mourn that qualified sisters will only be permitted to lead other women, rather than their male peers who will continue to lead mixed groups of men and women. Yes, I know it follows the pattern of the Church at large, to place women only in positions of authority over other women, young women, or children, but that does not keep me from hoping. Women’s inclusion as full leaders, over mixed-sex groups in the mission field could help men and women in the Church recognize that women may also be authorized servants of God. (And maybe then, less people would take bathroom breaks when women speak at General Conference.)

With my co-perma blogger at Exponent, April (who wrote a fabulous analysis of this same issue), I wish that the husband and wife pair leading a given mission could be both called as, and actually called, Co-Mission Presidents. If this is not deemed possible, perhaps the wife may take on the title given to Temple Presidents’ wives, and be called the Mission Matron. Anything that does not require referring to her solely in relation to her husband and his (presently) much more official calling.

But overall, this most recent change, granting sister missionaries richer opportunities to lead and serve is a beautiful change, because it is a step in the right direction–the brighter direction. I am looking forward to even brighter days to come, filled with light that is of God, and which Doctrine and Covenants 50 tells us “groweth brighter and brighter until the perfect day.”

*As well as, frequently, what our goals should be.