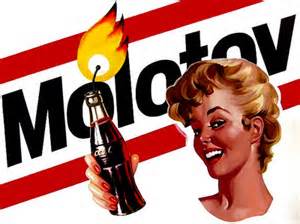 Elder Dallin H. Oaks gave a talk at the opening of the April 2014 General Conference Priesthood session titled The Keys and Authority of the Priesthood. I listened to it in real time knowing that, even as Elder Oaks was pronouncing his justification for women not being allowed to hold the priesthood, women were being denied entrance to the building in which he was speaking.

The question crossed my mind as to whether an apostle of Jesus Christ should be seeking to justify the exclusion of women in a meeting to which women were excluded, or to be outside the sealed building with those being excluded; not necessarily agreeing with them, but at least mourning with those that mourn and comforting those that stand in need of comfort.

I had decided my next blog would be an open letter to Elder Oaks, explaining why I disagreed with much of what he had to say in this address. But early drafts had a snarky tone I did not like.

On the morning of Sunday, May 25th, 2014, my idea of an open letter to Elder Oaks went by the wayside as I was going to the closet to pick out clothes to wear to church. 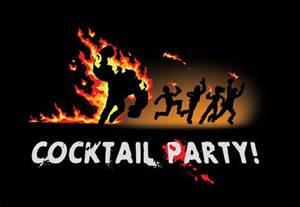 My wife was reclining on the bed reading something intently on her I-Pad. “Do you know what is going to happen in church today?” she asked. I did not.

“They are going to be teaching on Elder Oaks’ priesthood talk throughout the church today,” she continued, “The one on why women can’t have the priesthood. Ordain Women is encouraging people to wear purple to church in protest.”

“Really?” I said, immediately changing my mind as to what I was going to wear. I had on a light blue shirt by this time, and ditched it for something in more of a purple vein. I tried on a striped lavender pastel shirt with a matching tie and checked it out in the mirror. Not enough, I decided. If I was going to make a statement, I might as well go whole hog. I dived back into the closet for a deep purple shirt and grabbed a purple Jerry Garcia tie to go with it. If I had a purple suit, I would have worn that, too.

My wife put on a beautiful purple dress and purple shawl, accented with purple pendant and purple earrings. We got in the car with our 17-year old daughter and headed to church, not knowing what would happen, but definitely dressed for the occasion.

Nothing was said about Elder Oaks’ talk in sacrament meeting, and Sunday school followed the 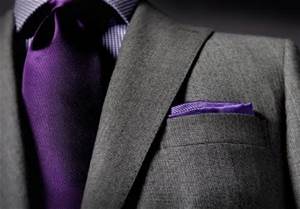 correlated Old Testament lesson. I was beginning to think maybe we had gotten bad Intel. The third hour was when the hammer fell.

There would be a combined high priest/elders meeting in the chapel on the talk, while the same subject would be presented to the women separately in Relief Society. (I guess it would be counter-intuitive to have the women meet with the men when this talk was discussed.) Copies of the talk were distributed prior to the lesson. A kindly retired high priest (and former bishop) I have known for many years would be the instructor.

The instructor introduced the lesson and asked if Elder Oaks had not been a lawyer. I volunteered that Elder Oaks was a former justice of the Utah Supreme Court, which meant that he most definitely was a lawyer, and that this fact also explained why he was so boring. This remark was greeted by a surprising amount of laughter, perhaps because it found so much agreement, and perhaps because I was simultaneously making fun of myself, a practicing lawyer of 24-years.

The instructor laughed good-naturedly but said he found Elder Oaks’ talk very interesting. He proceeded with the lesson.

The instructor had somebody read the first section of Elder Oaks’ talk, about how “There is no ‘up or down’ in the service of the Lord,” and how the calling of Stake President is “equally honorable” 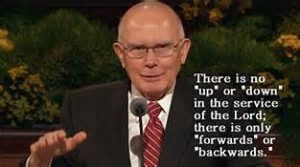 with that of ward nursery leader. The instructor asked if that was how things really were in the church, and called on me, likely because he saw me shaking my head disbelievingly in the back row.

No one took issue with my somewhat obvious observation, and comments were made on the tangential subject of how we do not covet leadership callings in the Church. The instructor said that maybe going from Sunday school teacher to Priest Advisor might be an example of a “lateral move.” All agreed. Including me. 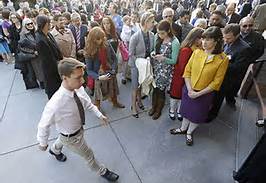 The instructor said the reason Elder Oaks had given this talk is because there is a “group of women” in the Church who are lobbying to get access to the Priesthood Session of General Conference; that he is not sure if that is all they want; but that Priesthood Session had been broadcast live the last two conferences so that they would know “we aren’t talking about anything secret.” Some class members chuckled at this idea.

Before the lesson proceeded any further, I thought it best to give the twenty or so elders and high priests present fair warning.

“In the interests of full disclosure,” I said, “I am one of those members who support Ordain Women in their desire to be admitted to the Priesthood Session. I also believe that women should have the priesthood. That is why I am wearing purple today, and why my wife is wearing purple in Relief Society. Supporters of Ordain Women all over the country are wearing purple to church today to protest against Elder Oaks’ talk.”

The instructor, whom I mentioned is a kind and soft-spoken gentleman who has known me for some time, was not completely surprised by this news and took it in stride, though I was peripherally aware of some considerable seat-shifting and neck-craning among the other priesthood holders.

He continued on with the lesson, 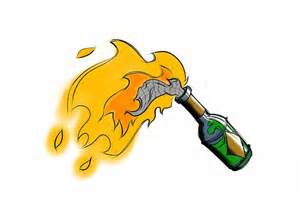 having somebody read the second section of Elder Oaks’ talk, which included the words, “With the exception of the sacred work that sisters do in the temple under the keys held by the temple president, which I will describe hereafter, only one who holds a priesthood office can officiate in a priesthood ordinance.”

A member of the class commented that having women do washings and anointings in the temple was only practical since it wouldn’t be good to have men performing that ordinance on women.

“I was glad Elder Oaks brought up this point,” I said, “Because it is an important issue. If women can perform priesthood ordinances inside the temple, what prevents them from performing priesthood ordinances outside the temple? Elder Oaks says that he will ‘describe” this exception later, but he never really gets around to it. All he does is quote Joseph Fielding Smith as having said something similar. I wish Elder Oaks had taken the time to explore this issue further because I think it is an interesting and important question.”

No response was immediately forthcoming to this comment and the instructor continued with the lesson. He was approaching the money quote at the end of Section III, which he read himself, “But even though these presiding authorities hold and exercise all of the keys delegated to men in this dispensation, they are not free to alter the divinely decreed pattern that only men will hold offices in the priesthood.” To my surprise, the instructor immediately called on me by name though 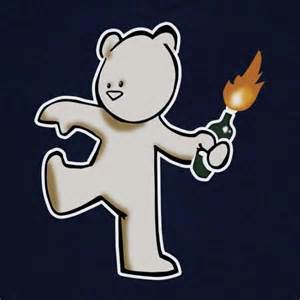 I had not raised my hand. “Corbin?”

Having already written several drafts in response to this talk, I was ready to answer without missing a beat. “You will see there is no footnote to this comment,” I said. “No footnote, no reference, no citation. This is the main point of Elder Oaks’ entire talk. And yet, even though he provides plenty of footnotes elsewhere, he provides none for this point, either here or the second time he makes the same point later on. That is because there is no ‘divine decree’ that only men will hold offices in the priesthood. He is expecting us to believe it based on his own say-so.”

(When I said that there was no footnote for this point, numerous class members suddenly began paying increased attention to their copies of Elder Oaks’ talk.)

This comment was too much to be allowed to stand unchallenged. A number of class members rose to the occasion. One said that this is why we have living prophets and apostles—to tell us what the truth is. Another chimed in that we need to get in line with the leaders of the church. A third said that, like Christ, we have to submit our will to the will of God; that it is not up to us to direct God in how to run his church. A fourth offered that God will never let the prophet lead the church astray by teaching false doctrine. 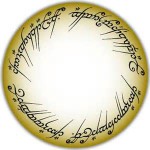 I bit my tongue on this one, though. Too snarky. Brigham Young seemed to have survived teaching the Adam-God Doctrine, though.

The time for class was running out and the instructor was winding down. Before he finished, I thought I would make one final comment as a combined rapprochement and coupe-de-grace of sorts.

“I want everyone here to know that I have complete respect for your opinions and your beliefs; I am not trying to be controversial or change anybody’s mind. But I am old enough to remember that before black men were allowed to hold the priesthood in 1978, I heard many General Conference talks from church leaders saying how it was God’s will that blacks not hold the priesthood; that it was God’s priesthood to give to whomever he wanted; and that it was not up to church leaders to change the divine decree of God. When I remember this history surrounding blacks and the priesthood, 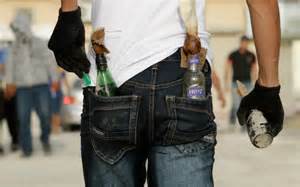 it complicates the issue of women and the priesthood for me personally.”

The instructor smiled and observed, “It is a good thing that we all have our free agency, right?”

The lesson ended on a good note and a closing prayer was given.

And so the Lord provided a way for me to respond to Elder Oaks’ talk in a public setting, while at the same time giving me a format to write about it in this blog.

In conclusion, all I can say is that thoughts were shared, cocktails were tossed, and at least one priesthood-holder had a very good time.